Oxford scientists are mapping church-owned forests around the world, many sheltering endangered species.

According to estimates by religious communities, they own up to one tenth of the world’s forests. Scientists at the University of Oxford Biodiversity Institute recognize the important role these religious groups can play as partners in conservation and are producing a map of the world’s religious forests – church-owned tracts of land that contain some of the richest biodiversity in the world, including some of the highest numbers of threatened species.

The research team is currently measuring the extent of religious forests and assessing their value in terms of biodiversity and land use by local communities. Community elders manage religious forests, most tracts receiving no formal protection. The researchers hope an evidence-based assessment will be the first step in ensuring these biodiversity hotspots receive full protection through official channels – like regional or national governments.

An initiative to globally map religious forests was started in collaboration with the Alliance of Religions and Conservation (ARC), but until now the efforts have focused mostly on areas owned by mainstream religious groups. Oxford University has teamed up with ARC and the scientists behind another similar project, SANASI, to spearhead an evidence-based approach that identifies and assesses all religious forests, including those managed by much smaller groups.

Kathy Willis, Shonil Bhagwat and graduate student Ashley Massey at the Biodiversity Institute aim to create a database that can inform scientists on how they can work with community groups and religions.

The Oxford research team is engaged, firstly, in investigating what legal or official data exist on boundary lines and the rights to the land.

Ethiopian highlands. Ethiopia’s last and most biodiverse forests survive in 35,000 fragments of woodland across the country. Some of these belong to the Ethiopian Orthodox Church. Via Wikipedia

The researchers will work with groups of many different faiths: those who manage the sacred groves in India and the Shinto shrines in Japan, and the Ethiopian Orthodox Church, which owns 300 fragments of forest including the last remnants of Afromontane tropical forest containing rare and endangered insects. These religious sites appear to contain a high proportion of species that appear on the United Nations’ Red List (of threatened species).

In addition to assessing the forests’ biodiversity value, the Oxford researchers will assess their use by local people over generations; their role in carbon dioxide absorption; and their value to local people by way of medicinal plants, and as spaces for cultural, recreational and religious activities.

We urgently need to map this vast network of religious forests, sacred sites and other community-conserved areas to understand their role in biodiversity conservation. Such mapping can also allow the custodian communities, who have protected these sites for generations, to secure their legal status. 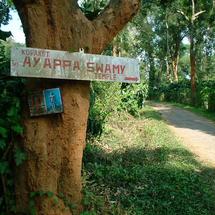 Sacred grove in India. Via University of Oxford

Bhagwat’s field studies in India have shown that some regions contain one sacred forest for every 741 acres (300 hectares), with the largest being over 247 acres (100 hectares) in size. He discovered that in the state of Karnataka in southern India, there are threatened tree species in religious forests that are not found in formal protected areas. Examples include poison arrow tree (Antiaris toxicaria), some species of fig (Ficus microcarpa) and some species of myrtle (Syzygium zeylanicum). Other species such as Hopea ponga, Madhuca neriifolia and Vateria indica are also found only in a few remaining pockets of forest protected as sacred. In Kodagu district, nearly one third (49 out of 163) of the macrofungi that thrive in sacred groves are not thought to exist anywhere else in the world, he says.

Bottom line: Researchers Kathy Willis, Shonil Bhagwat and Ashley Massey at the University of Oxford Biodiversity Institute are creating a global map of religious forests. The scientists have teamed up with ARC and SANASI to assess the forests in terms of biodiversity and land use by local communities.

Read more at University of Oxford

Read more at Alliance of Religions and Conservation

Michael Lefsky: First-ever map of height of all the world’s trees