Managing wild horse and burro populations in a human world

There was no more glorious image to this girl, growing up in Texas in the middle of the last century, than that of wild horses roaming free. As a child, I played with plastic replicas of them, dreamed of riding them, wanted to be them. That’s why I took note today (June 5, 2013) when the National Research Council released a new report on science-based strategies for the management of free-ranging horses and burros in the western U.S. The U.S. Bureau of Land Management (BLM) currently manages herds of feral horses and burros at some 180 “long-term holding facilities” for free-ranging horses, such as the Pryor Mountains Wild Horse range in Montana, whose herd of about 170 horses is depicted via the photos on this page. According to the new National Research Council report, these holding areas for feral horses are becoming “both economically unsustainable and incongruent with public expectations.” The horse populations there are growing too fast to stay in ecological balance with their surroundings, the report suggests. The report also makes some suggestions for what can be done to improve the management of “wild” horses and burros in a world where wildness is no longer an option. 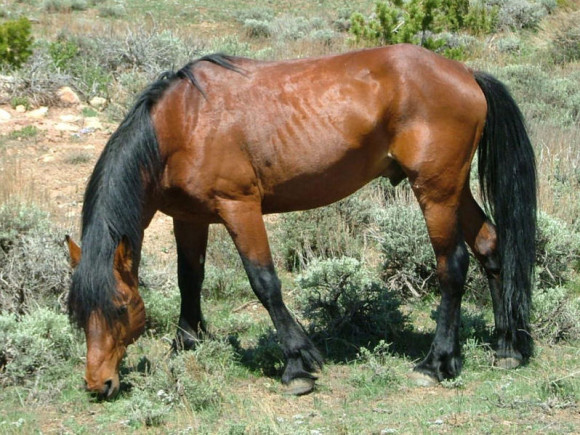 A feral or “wild” horse in 2009 at the Pryor Mountains Wild Horse Range in Montana, one of nearly 200 wild horse ranges in the western U.S. discussed in a new National Research Council report on how to manage free-ranging horse and burro populations. There’s a very interesting description page for this photo on Wikimedia Commons.

The recent history of free-ranging horses is not pretty. In 1900, there were an estimated two to five million feral horses in the United States, but they began to compete with domestic cattle and sheep for grazing lands. Hunters didn’t like the horses, either, saying they put pressure on ranges that were better left to wild wolves that could then be hunted for sport. The U.S. government stepped into the equation in the 1930s, when the U.S. Forest Service and the U.S. Grazing Service (predecessor to the BLM) – acting under political pressure from farmers and hunters – began a periodic removal of hundreds of thousands of feral horses from federal property. There are tales of federal dollars paid to private contractors, who sold wild horse carcasses for pet food, and many wild horses were simply shot.

Around the time I was dreaming of horses as a girl, advocates for free-ranging horses began to act. Velma Bronn Johnston — sometimes known as “Wild Horse Annie,” a secretary at an insurance firm in Reno, Nevada – spearheaded efforts that led to the first federal protection for wild horses, signed into law by Dwight D. Eisenhower in 1959.

In 1971, Richard Nixon signed the Wild and Free-Roaming Horses and Burros Act of 1971, which made it a crime for anyone to harass or kill feral horses or burros on federal land, required the departments of the Interior and Agriculture to protect the animals, required studies of the animals’ habits and habitats, and permitted public land to be set aside for their use. But the struggle to maintain some semblance of integrity for wild herds has continued to this day, sometimes via controversy over the BLM’s Adopt-A-Horse initiative and sometimes due to legal technicalities that ultimately harm the herds or the animals themselves. 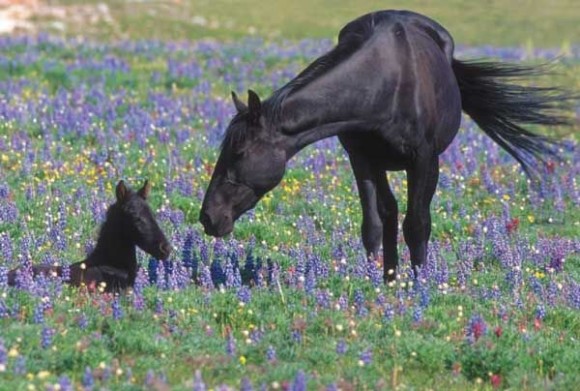 Feral mare and her foal. The new NRC report suggests that some wild mares like this one need birth control. Image taken in 2011 at the Pryor Mountain Wild Horse Range in Montana via Wikimedia Commons.

With no intervention by BLM, the horse population will increase to the point of self-limitation, where both degradation of the land and high rates of horse mortality will occur due to inadequate forage and water. In addition, periodic droughts, many of them severe, in the western public lands cause immediate and often unpredicted impacts.

The study committee suggests that the management of free-ranging horse populations – without the awful specter of periodic removals – will require “widespread and consistent application of fertility control,” that is birth control for the horses. 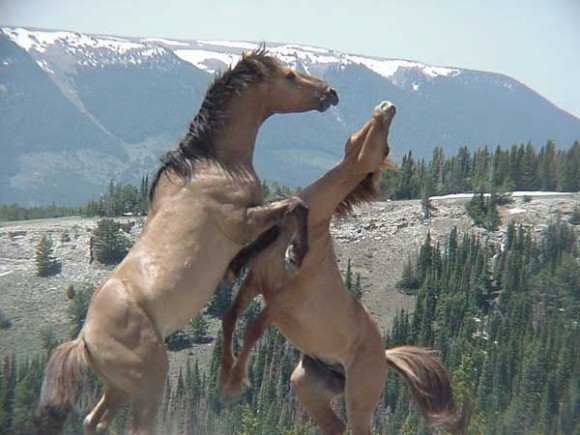 Feral stallions fighting in 2011 for dominance of a herd of mares, at the Pryor Mountain Wild Horse Range in Montana in the United States. The new NRC report recommends vasectomies for some free-ranging stallions. Image via Wikipedia Commons.

Three birth control methods are recommended for the horses, in the report. The first is chemical vasectomy for stallions. The next two are porcine zona pellucida (PZP) for mares (used to reduce populations of urban deer, and GonaCon for mares (another deer population control drug).

Guy Palmer, a veterinarian with Washington State University and chair of the National Research Council study committee on the subject said in today’s press release:

The committee recommended these approaches based on the evidence of their efficacy with other populations … but cautioned that scaling up use of these methods to the larger and more disseminated horse populations in the western U.S. will be challenging.

One can only hope so.

The committee also wants the BLM to improve its estimates of free-ranging horse and burro population sizes. Many animals are missed in current counts, apparently. Finally, the committee recommends, as always, more studies, in this case:

.. an examination of the genetics and health of population groups as well as of the range lands they occupy can be used to assure that both the animal populations and the ecosystem are being appropriately managed. Developing an iterative process whereby public participants could engage with BLM personnel scientists on data gathering and assessment would increase the transparency, quality, and acceptance of BLM’s decision-making process.

Bottom line: The National Research Council released a new report today (June 5, 2013) on free-ranging horses and burros on federal lands, suggesting that wild horse populations are growing too rapidly and that the birth control techniques for the horses should be applied. The study was sponsored by the Bureau of Land Management.