While eastern U.S. has cold and unsettled weather, dry and warm weather continues in the U.S. West. Over 60% of the U.S. West is experiencing extreme drought. 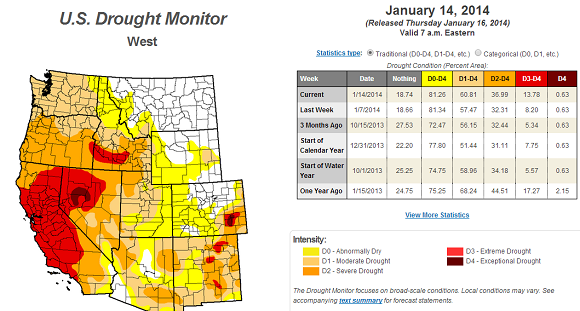 Nearly 60% of the U.S. West is experiencing drought conditions in January 2014. Image via U.S. Drought Monitor

We typically associate drought conditions in the summer months, when some areas receive barely any rain and the heat of the day helps evaporate the moisture out of the soils.

However, if you live across the western United States in the winter of 2014, you are finding temperatures well above average with very little rain in the picture. Places such as Los Angeles and San Diego are seeing temperatures nearly 10 to 15 degrees above average. While the eastern half of the United States is experiencing cold and unsettled weather, dry and warm weather continues in the U.S. West. Over 60% of the U.S. West is experiencing extreme drought conditions, with nearly 60% of California in an extreme drought.

If you think in terms of moderate to extreme drought, then that number jumps to 95% of California. Extreme drought doubled in one week as California jumped from 27.6% to 62.7%.

The forecast as of January 18, 2014 continues to show high pressure sticking around the U.S. West coast for several days. Drought conditions are expected to continue to worsen with no relief in sight. 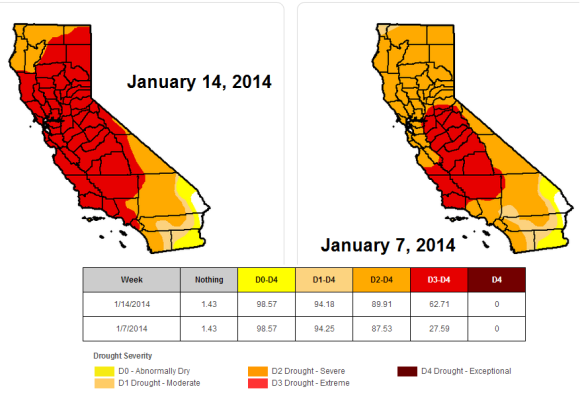 Drought across California continues to worsen this year. Image via U.S. Drought Monitor 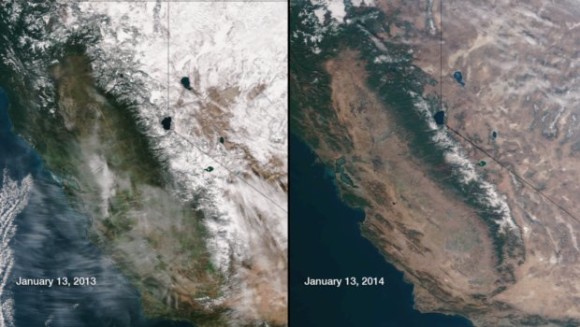 Many problems have developed over the past month as drought conditions worsen in the U.S. West. Cattle are being sold because farmers are unable to provide enough water to hydrate them. Winds and dry conditions are fueling wildfires across the region, including the Colby Fire in the foothills northeast of Los Angeles, which began burning on January 16. Ski resorts remain closed thanks to very little snow across the higher elevations in the Sierra Nevada. If this pattern continues, with minimum snowfall across the western mountains, millions of people will be affected with possible water shortages.

According to the New York Times:

The snowpack plays a critical part in what is one of the world’s most sophisticated and complex water delivery systems, supplying water to more than 25 million people and the $44.7 billion agricultural industry. The snow that piles up on the Sierra Nevada’s 400-mile range during the winter acts as a reserve that starts to melt in the spring. The melting snow drains into rivers that feed reservoirs below, providing water to densely populated communities hundreds of miles south in Southern California. 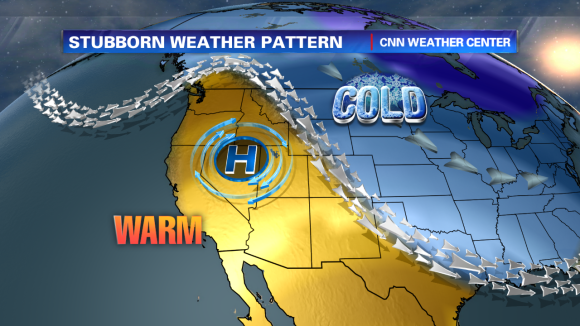 Ridge of high pressure is keeping the U.S. West coast warm and dry in the winter of 2014. Image via CNN Weather

The weather across the United States has been locked into a persistent pattern. This pattern has not budged much, and it is keeping the west coast dry and warm. A ridge, which is associated with high pressure, has been the main story for the U.S. West coast. Meanwhile, a trough continues to dig across the eastern half of the United States. A trough, also known as an extending area of low pressure, continues to bring cold temperatures and wet conditions from the U.S. Northern Plains, to the Midwest, and into the U.S. East.

The latest weather models continue to show this pattern for the next several days. What makes this weather so fascinating – or dismaying – is that January is considered one of California’s wettest months of the year.

Bottom line: Drought will continue to worsen as high pressure remains over the same areas. Nearly 95% of California is under drought conditions with over 60% experiencing extreme drought conditions. Over 60% of the U.S. West coast is under a moderate drought or worse. The drought is hurting the economy as water demands increase, ski resorts remain closed, and food prices possibly going up.