Major cold, snow, and even ice for a large part of the U.S.

Snow and a significant ice event is likely all the way from parts of North Texas into the Great Lakes and U.S. Northeast over the next several days.

The first day of winter for the Northern Hemisphere comes on December 21, 2013. However, for Canada and the United States, old man winter has decided to arrive closer to the start of meteorological winter (December 1). Some of the coldest Arctic air we have seen in years is pushing to the south. It is bringing temperatures 30 to 50 degrees below average in parts of the north-central United States. Snow and a significant ice event is likely all the way from parts of North Texas into the Great Lakes and Northeast over the next several days. There will be extremes all across the United States for this first week of December. If you like roller coasters, then you will enjoy this crazy ride. 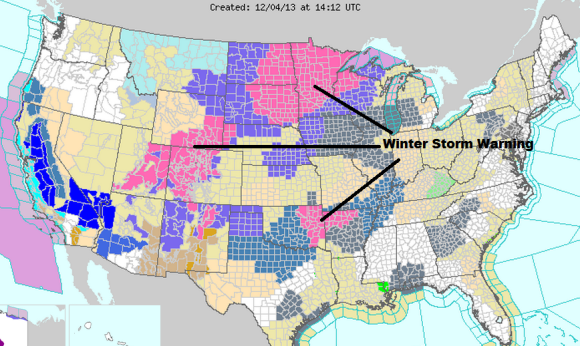 Winter weather is going to create a big mess across the United States. Winter Storm Warnings have already been issued. More to come over the next several days. Image via NOAA

Major cold will hit parts of Minnesota, North Dakota and points as far south as Texas and into parts of the U.S. Southeast. In higher elevations in Montana/North Dakota/Minnesota, temperatures could drop around -30 degrees Fahrenheit or -34 degrees Celsius.

Many areas will see temperatures 30-40 degrees below average. For instance, Dallas, Texas will reach near 80 degrees Fahrenheit today (December 4) and drop into the low 30s for highs by Friday and Saturday, December 6 and 7.

As the Arctic front pushes to the U.S. Southeast, it will likely slow down and stall out. Moisture will spread along this front, while cold, sinking air sticks around the surface from around the city of Dallas northwards into Kentucky and Ohio. When rain falls into a shallow layer of temperatures at or below freezing near the surface, we typically see freezing rain. Unfortunately, it looks like freezing rain could be significant and possibly resulting into a major ice storm for cities such as Dallas, Memphis, and Little Rock.

Ice storms can leave cities paralyzed. Roads, bridges, trees, and power lines can be covered in ice. Widespread power outages are possible as the weight of ice knocks branches and trees down that could crush into power lines, houses, or vehicles. Some of the models are going very extreme with freezing rain amounts. In fact, some of the highest amounts I have seen from a few select models are showing 0.75-1.00 inches of freezing rain near Dallas, Texas and around the Memphis, Tennessee area.

If you are a Missouri fan and plan on traveling to Atlanta for the SEC Championship game, you might find yourself trapped as you drive through western Tennessee. Be fully aware that weather conditions will go down significantly by Thursday evening, December 5.

Probabilities of freezing rain for a quarter of an inch or greater for Friday morning through Saturday morning, December 6 and 7. Image Credit: Weather Prediction Center

Meanwhile, while a large majority of Canada and the U.S. is experiencing extreme cold, the U.S. Southeast will experience record warmth in a few spots. Parts of the Gulf Coast, Miami, northward into Atlanta and the East Coast will see temperatures well above average. Many areas will climb into the 70s. There is a good shot that Atlanta could break their maximum low temperatures Thursday and Friday as temperatures are only expected to fall near 60°F. 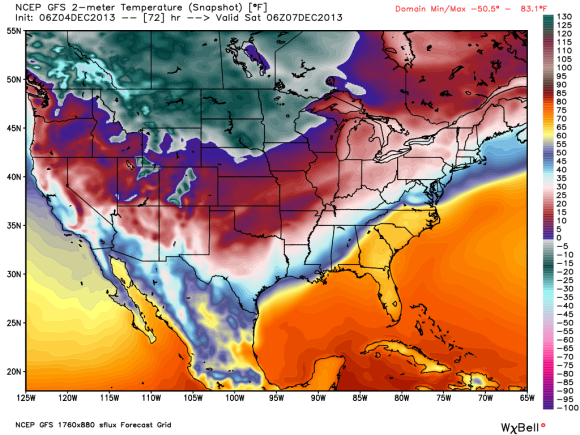 Extreme temperatures showing up in our weather models. This is the GFS showing the extreme cold pushing to the south on Saturday morning, December 7. Can you find the cold front in the U.S. Southeast? Image via WeatherBell

Bottom line: At this writing – December 4, 2013 – a significant surge of cold, Arctic air is already pushing down from Canada into the United States. In the coming days, temperatures will be well below average, and in some spots, the coldest we have seen in many years. Snow is likely across the U.S. West and Upper Midwest. Meanwhile, a significant ice storm is likely in parts of the U.S. South into the Ohio Valley. If you have any travel plans between now and Sunday, December 8, in these regions, be fully aware that this storm will cause major problems. If you live in a region where ice is likely, you should prepare now. Make sure you are ready to have several days without power. Also, plan on staying inside as ice storms can trap people in their homes as driving conditions become too difficult.