Extreme cold is hitting Canada and the eastern half of the United States this week. Many areas have not seen such cold temperatures in nearly two decades.

Extreme cold is hitting Canada and the eastern half of the United States this week. Many areas have not seen such cold temperatures in nearly two decades. Chicago will not even get above zero Monday, as highs are only projected to “climb” to around -5 to 0 degrees Fahrenheit.

The cold is pushing to the south as well. Parts of the Southeast will also see temperatures dropping into the single digits with wind chills as cold as -15°F. Several records will likely be broken over the next 48 hours as the arctic air over the North Pole spreads into the United States. 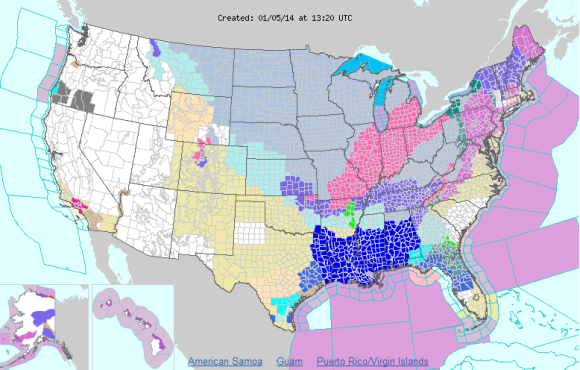 The eastern half of the United States is covered up in winter advisories, watches, and warnings on January 5, 2014. Image Credit: NOAA

Are you planning on watching the Green Bay Packers play the 49ers? Well, if you are at the game, you will experience air temperatures near zero and wind chill values increasing to around -20°F. It is super important that everyone attending the game takes extra procedures to stay warm. According to Green Bay Packers Director of Public Affairs Aaron Popkey, 70,000 hand warmers will be distributed at the game when kickoff occurs around 4:30 p.m. EST. 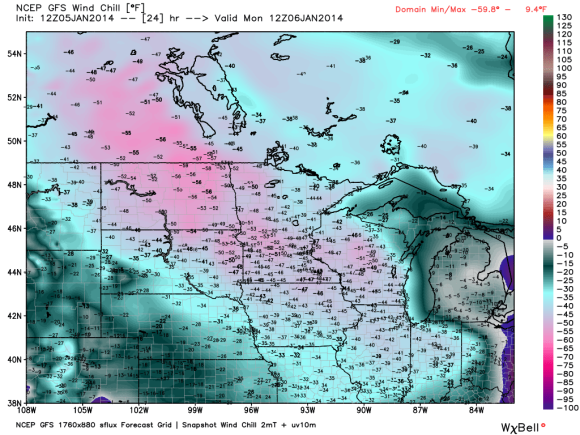 Wind chill temperatures (what it feels like) Monday morning across Canada and the Northern Plains. Image Credit: GFS model via Weatherbell

Nearly 115 million Americans are under some type of wind chill advisory, watch, or warning. On Monday, Temperatures will be colder in the Southeast than in Anchorage, Alaska. Frostbite could occur within 30 minutes if exposed to the elements for people even in the U.S. Southeast. Heavy snow will push through parts of Kansas City, St. Louis, Indianapolis, Detroit and into parts of Ontario and Quebec. The cold is so extreme that schools in Minnesota and as far south as the Southeast are canceling or delaying classes Monday. The deep freeze won’t start to let up until Wednesday of this week. 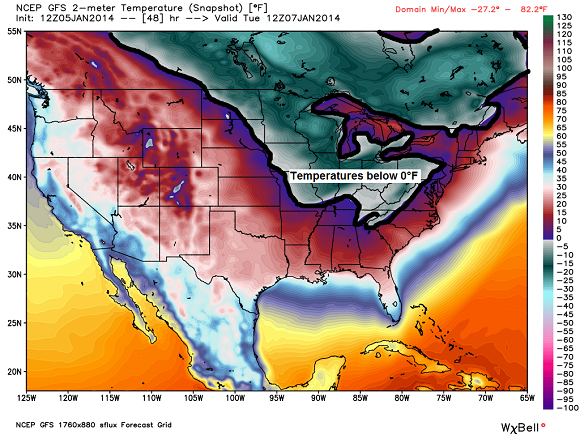 Bottom line: Extreme cold is pushing into the Eastern United States. Millions of Americans are being affected with extremely cold temperatures and gusty winds. The combination of the two will bring about dangerous wind chill temperatures that will drop well below zero that can create frostbite issues in 30 minutes or less. The best way to beat out the cold is to stay warm, make sure your pets and pipes are protected from the outside elements, and to get that fireplace started. Stay warm!