Five dead in Solomon Islands after earthquake and tsunami

Powerful 8.0-magnitude earthquake struck at 01:22 UTC on February 6. Tsunami alerts across the Pacific. At least five dead in a remote part of the Solomon Islands.

UPDATE FEBRUARY 6, 2013 4:35 A.M. CDT (9:45 UTC) Many media are reporting that at least five people have died from a tsunami in a remote part of the Solomon Islands, near Australia, after a rare and powerful 8.0 magnitude earthquake earlier today. The tsunami triggered evacuations across the South Pacific. The quake struck 340 km (211 miles) east of Kira Kira in the Solomons. At least 100 homes in the community of Lata are said to have been destroyed in the tsunami. Water and electricity remain down there at this writing. There are unconfirmed reports of fishermen swept out to sea.

Read more about the tsunami deaths from Reuters

Read more about tsunami destruction from the New York Times

According to the U.S. Geological Survey (USGS), the magnitude-8.0 earthquake struck at 01:22 UTC on February 6, 2013 (Tuesday evening, June 5, in continental U.S.). The Pacific Tsunami Warning Center issued a warning for places in the Pacific near the epicenter, and a watch elsewhere in the Pacific. It later canceled the warnings for the outlying regions. The Pacific Tsunami Warning Center commented in their bulletin:

AN EARTHQUAKE OF THIS SIZE HAS THE POTENTIAL TO GENERATE A DESTRUCTIVE TSUNAMI THAT CAN STRIKE COASTLINES NEAR THE EPICENTER WITHIN MINUTES AND MORE DISTANT COASTLINES WITHIN HOURS.

Here are the details of the earthquke from USGS. 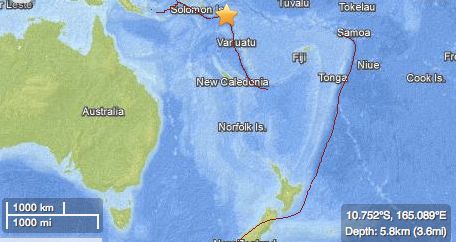 A 8.0-magnitude earthquake struck near the Solomon Islands on February 6, 2013 (February 5 in U.S. and Europe). 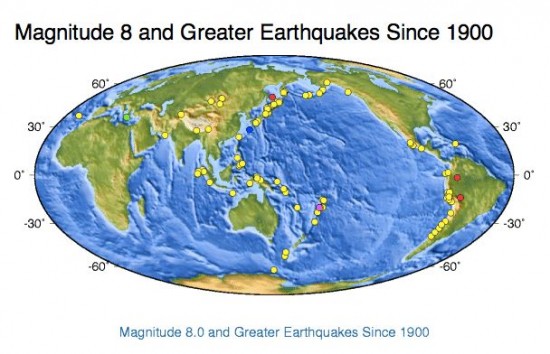 Magnitude 8 earthquakes are rare and happen most often in the region around the Pacific Ocean known as the Ring of Fire. This region is extremely geologically active due to the movement of land plates. Read more about this image, and about magnitude 8.0 earthquakes since 1900, from USGS.

Magnitude 8 earthquakes are rare. The February 6, 2013 earthquake occurred as a result of faulting – the movement of rocks along a fracture in Earth’s crust – on or near the plate boundary interface between the Australia and Pacific plates. In the region of this earthquake, the Australia plate converges with and subducts – or dives – beneath the Pacific plate, moving towards the east-northeast at a rate of approximately 94 mm/year.

Here is the original bulletin from the Pacific Tsunami Warning Center (later cancelled):

THIS BULLETIN APPLIES TO AREAS WITHIN AND BORDERING THE PACIFIC OCEAN AND ADJACENT SEAS…EXCEPT ALASKA…BRITISH COLUMBIA…WASHINGTON…OREGON AND CALIFORNIA.

… A TSUNAMI WARNING AND WATCH ARE IN EFFECT …

A TSUNAMI WARNING IS IN EFFECT FOR

A TSUNAMI WATCH IS IN EFFECT FOR

Go directly to the USGS