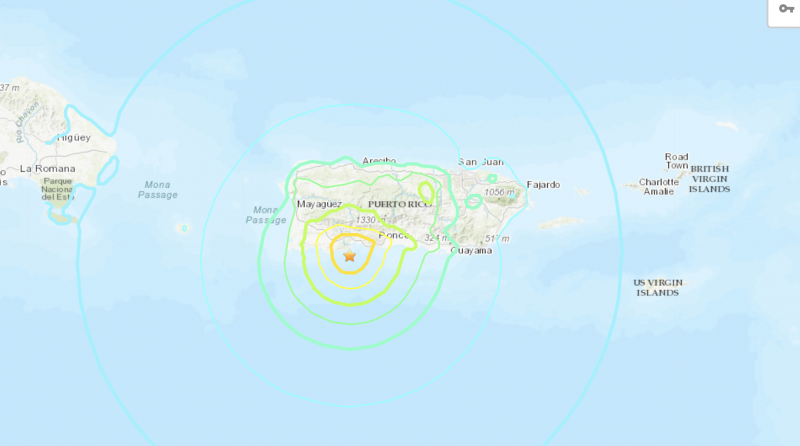 The January 7, 2020, 6.4-magnitude earthquake in Puerto Rico was centered south of the island. Image via USGS.

Reprinted from the U.S. Geological Survey.

On January 7, 2020, a magnitude 6.4 earthquake struck Puerto Rico at 4:24 a.m. local time (08:24:26 UTC). Significant damage is possible. Over the past several weeks, hundreds of small earthquakes have occurred in the Puerto Rico region, beginning in earnest with a magnitude 4.7 earthquake late on December 28 and a magnitude 5.0 event a few hours later.

The magnitude 6.4 earthquake on January 7 was widely felt. According to ShakeMap, strong to very strong shaking occurred across parts of southern Puerto Rico, closest to the event, and moderate shaking occurred across the rest of the island. The NOAA Tsunami Warning System states no tsunami warning or advisory. The USGS summary page on this earthquake includes an aftershock forecast. Aftershocks will continue near the mainshock.

The January 6 and 7, 2020, magnitude 5.8 and magnitude 6.4 earthquakes offshore of southwest Puerto Rico occurred as the result of oblique strike-slip faulting at shallow depth. At the location of this event, the North America plate converges with the Caribbean plate at a rate of about 20 mm/yr towards the west-southwest. The location and style of faulting for the event is consistent with an intraplate tectonic setting within the upper crust of the Caribbean plate, rather than on the plate boundary between the two plates.

Here are the largest earthquakes to impact Puerto Rico since yesterday

There have been 65 quakes of at least magnitude 2.5 during that time #PuertoRicoEarthquake pic.twitter.com/xFOobmrwX8

Visit the USGS event page for more information. For estimates of casualties and damage, visit the USGS Prompt Assessment of Global Earthquakes for Response (PAGER) website. If you felt any of these earthquakes, report your experience on the USGS Did You Feel It? website for this event.

USGS scientists expect that this event will trigger aftershocks, but these will decrease in frequency over time. You can view the aftershock forecast here.