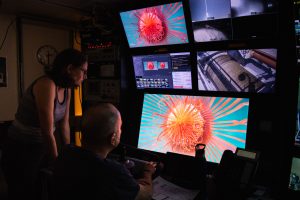 A rare deep-sea hydroid is discovered by Dr Nerida Wilson (Chief Scientist, Western Australian Museum) and her team. The animal was found at 2497 m in Cape Range Canyon using ROV SuBastian. Branchiocerianthus is a giant hydroid that consists of a single polyp on a long stem living on a sandy bottom. It is a close relative of corals, anemones and sea fans. It is the first time this amazing animal has been filmed and collected in Australian waters. Others have been found elsewhere in the world including Japan, Ireland and Norway. . Image via Schmidt Ocean Institute https://schmidtocean.org/schmidt-ocean-institute-offers-online-educational-science-content-for-students/

Thank you! Your submission has been received!
Oops! Something went wrong while submitting the form.
END_OF_DOCUMENT_TOKEN_TO_BE_REPLACED