Posted by Eleanor Imster and Deborah Byrd in Earth | April 24, 2018

“They might not always make it back to the exact beach where they were born, and instead might opt for beaches with similar magnetic properties, as if their internal GPS has just slightly mixed up addresses.”

It’s well known that loggerhead sea turtles will often return, sometimes over thousands of miles, to the beach where they hatched to lay their eggs. They use Earth’s magnetism to navigate back to their home beaches. But, as it turns out they might not always make it back to the exact beach where they were born, and instead might opt for beaches with similar magnetic properties, even if the beaches are far away from each other. It’s as if their internal GPS has just slightly mixed up addresses, said biologists from University of North Carolina at Chapel Hill, whose new research shows that loggerheads that nest on beaches with similar magnetic fields are genetically similar to one another.

Loggerhead sea turtles are fascinating creatures that begin their lives by migrating alone across the Atlantic Ocean and back.

Eventually they return to nest on the beach where they hatched — or else, as it turns out, on a beach with a very similar magnetic field.

Loggerhead turtles are the most abundant of all the marine turtle species in U.S. waters. But populations declining due to pollution, shrimp trawling, and development in their nesting areas, among other factors, have kept this wide-ranging seagoer on the threatened species list since 1978.

They said they hope their new research provides valuable insight into the turtles’ navigation and nesting behaviors that could advance future conservation efforts. They said:

… have important applications for the conservation of sea turtles, as well as other migratory animals such as salmon, sharks, and certain birds. 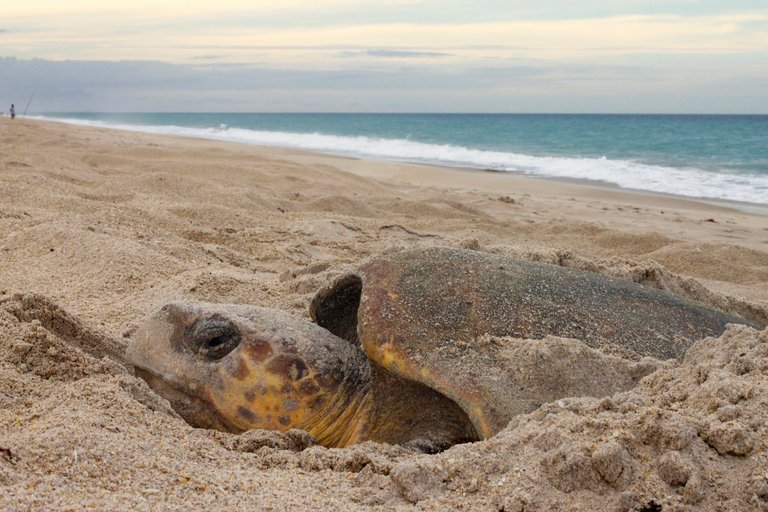 Loggerhead turtles use the earth’s magnetic fields to nest on Gulf of Mexico beaches in Florida. They return to within about 50 miles (80 km) of where they were born decades earlier. Image via J. Roger Brothers/UNC-Chapel Hill.

Bottom line: Using Earth’s magnetism, loggerhead sea turtles return to beaches where they hatched to lay their eggs. Or – as new research shows – they might return to beaches with similar magnetic properties, even if the beaches are far away from each other, biologists said.