This little bird, that looks kind of like a flying penguin, has got scientists rethinking how polar ecosystems are changing in our warming world.

This article is republished with permission from GlacierHub. This post was written by Kristen French..

In July of 2013, a team of scientists from France, Russia and the United States descended upon an uninhabited archipelago in the Russian Arctic called Franz-Josef Land, the northern most archipelago in the world. There they spent two months at Tikhaya Bay on Hooker Island, one of the archipelago’s 191 islands, tagging and studying a small black and white seabird called the little auk (Alle Alle), which nests on cliffs and dives for its dinner in the frigid water.

Their findings call into question some models of climate change impacts on polar ecosystems, argues David Grémillet, the lead scientist of the group, in research published in Global Change Biology in mid-January.

Given its remote high-Arctic location, Franz-Josef Land has long been considered a kind of Arctic Eden, sheltered from the impacts of climate change. Nearly 85 percent of its land mass is blanketed by glaciers and its islands are surrounded by extensive sea ice. But temperatures in the Arctic are rising, and are predicted to increase by as much as 14 degrees Fahrenheit by the end of the century. Grémillet and his colleagues wanted to measure how the ecosystem of this icy Arcadia is responding. 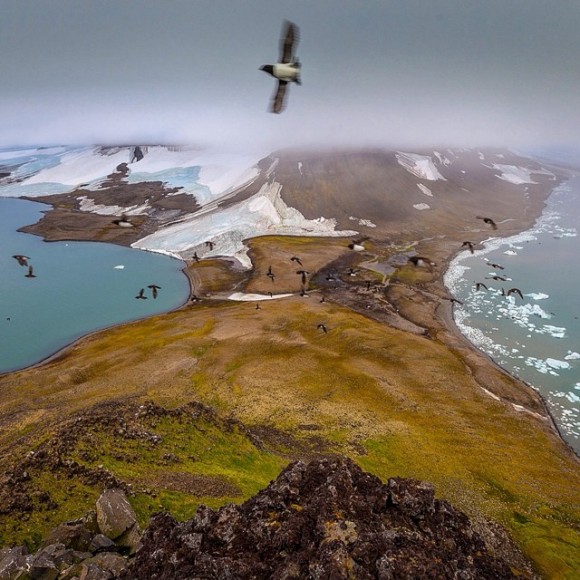 They chose the little auk as a subject because it is a so-called sentinel species, one that can be used as a proxy for the health of an entire ecosystem, much like the polar bear. The most abundant seabird in the Atlantic Arctic, with over 40 million individuals, the little auk is a major part of the food chain in polar ecosystems. Previous research has suggested that the little auk is quite flexible in the face of changes to its environment. But Grémillet and his colleagues suspected the bird might reach a breaking point due to its high energy costs and metabolic rate, as well as a diet primarily made up of copepods—tiny crustaceans that are themselves highly reactive to changes in sea ice and water temperature.

Using remote sensing data, the scientists measured changes in the volume and area of sea ice and glaciers between 1979 and 2013. They also tagged a number of little auks from one colony with tiny electronic devices affixed to legs or breast feathers to track their foraging behavior. These devices, called miniaturized temperature–depth recorders, provided information on the depth and duration of every dive, as well as the hours spent each day gathering food. The researchers then compared current and historical data on the diet, body weight and chick growth of little auks at Franz-Josef Land.

The data they collected revealed some bad news and some good news. The bad news: Sea ice in the Franz-Josef archipelago has, in fact, retreated markedly during the last decade, disappearing entirely during summer by 2005—a harbinger of future conditions elsewhere in the Arctic Ocean. Coastal glaciers have also retreated, dumping large volumes of meltwater into the sea. The good news: while disappearing sea ice curtailed the birds’ traditional feeding grounds, retreating glaciers created new ones. The little auks were able to adapt, feeding at the boundaries where glacier melt discharged into coastal waters at Tikhaya Bay, close to the their breeding areas. Local zooplankton were shocked by cold temperatures and dramatic contrasts in salt concentrations between the fresh meltwater and saline oceans, making them easy prey. The little auks were able to maintain chick growth weights, while adults lost just 4% of body mass. 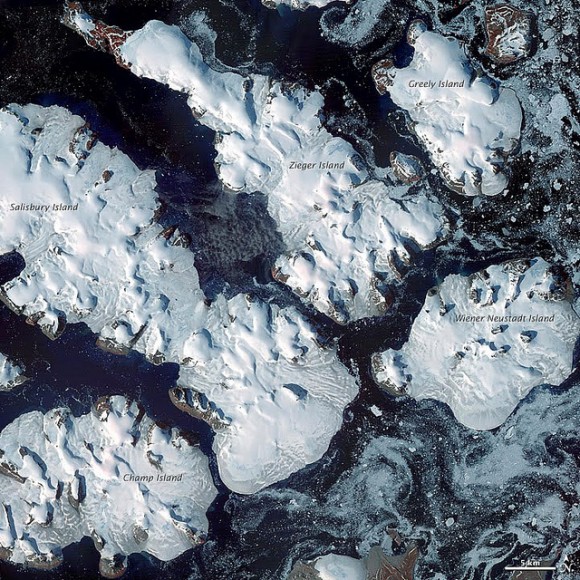 The little auks’ adaptability in Franz-Josef raises questions about previous research on the birds. In a 2010 paper, Nina Karnovsky of Pomona College predicted that 40% of all little auks would disappear from the Atlantic Arctic by the end of the 21st century, Grémillet and his colleagues note. They argue that this prediction must now be revisited. They also call for further study of little auks at other Arctic geographies, to see if they are as adaptable as the ones making a home at Franz-Josef Land.

The Franz-Josef little auk findings support the conclusions of other recent research on Adélie penguins in the Antarctic and seabirds and marine mammals in Alaska that suggest glacial melt can, in some cases, compensate for disappearing sea ice to support new feeding habits, benefitting certain animals within an ecosystem, according to the authors of the paper.

“There is currently a huge demand for predicting the fate of Arctic biodiversity exposed to ongoing climate change,” the authors write. “At the species level, this is achieved by building habitat models.” But if the models don’t take certain environmental interactions into account, inaccurate predictions will be made.

For other stories about birds on glacier-covered islands at high latitudes, look here and here.