Lifeform of the week: The mystery of the monk parakeets

Feral green parrots are living all over the United States. Where did they come from? How did they get here? And don’t they get cold in the winter?

A friend in Brooklyn, New York, where I was living at the time, first drew my attention to the exotic, bright green birds that occasionally turned up in the neighborhood trees. Various legends fluttered around the misplaced parrots – they’d escaped from the zoo, from a pet store, from a crate bound for a pet store, and had managed to establish themselves in some nook of the Big Apple. The tales portrayed the birds as a single anomalous colony unique to a city itself renowned for uniqueness. Only in New York…

But after moving to Austin, I began to notice suspiciously similar birds, slightly better camouflaged against the greener scenery, but still a bit too tropical looking to blend in with the grackles and mourning doves that dominate the local bird-o-sphere.

It took minimal detective work to uncover that both cities’ green-feathered inhabitants were of the same species – Myiopsitta monachus, or monk parakeet. And they’re not isolated to Brooklyn and Austin either. Monk parakeets have made themselves at home in many parts of the U.S., including Chicago, New Jersey, Connecticut and, of course, reigning invasive species capital Florida. They’ve also been spotted in such far flung residences as Spain, Kenya and Japan, in addition to their original habitat in South America.

Despite being thoroughly adorable, the parrots are considered a nuisance in many of their adopted cities, and owning them as pets is now prohibited in some U.S. states. Who could be so cold-hearted as to find fault with such delightful green birds? The electric company, for one. 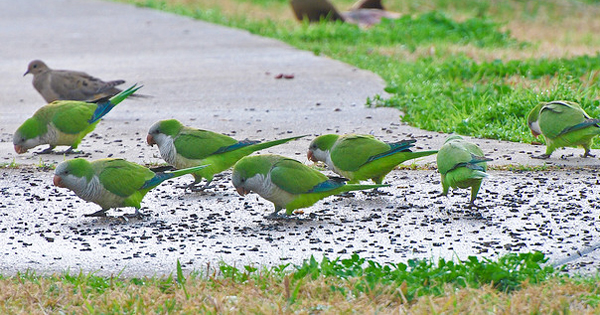 From pests to pets and back again 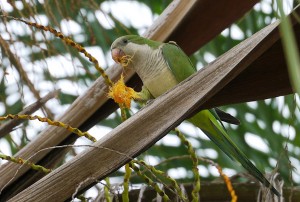 Monk parakeets are native to the southern lowlands of South America, from Bolivia to Patagonia. One of the few parrots that can inhabit both tropical and colder, temperate zones, their rugged South American origins have prepared them for much of the weather extremes U.S. seasons can serve up. But while they are hardy enough to adapt to new environments, monk parakeets are not a migratory species. So how did they make their way so far north? With a little help from a larger flying creature commonly known as the airplane. 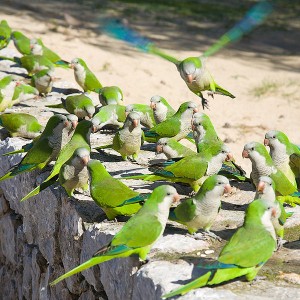 Monk parakeets in Spain… where I’ve also been. Not to sound paranoid, but did somebody pay these birds to follow me? Image Credit: Tamara K.

Monk parakeets were often viewed as crop pests in their home terrain, and twentieth century eucalyptus forestry had the unfortunate side effect of helping to increase their numbers (those tall trees make lovely nesting sites). By the 1960’s, frustrated South Americans had concocted a plan to thin out the green menace – rounding them up and exporting them as pets. Known as Quaker parrots in the pet trade, over 64,000 bird-cage-bound monk parakeets were shipped out between 1968 and 1972 alone. Whether by accidental or deliberate release (not everyone enjoyed the gregarious chatter of their new family members) pet parakeets in the U.S. and around the globe soon made their way into the wild.

As their numbers increased, concerns were raised that the feral parrots would eat U.S. agriculture out of house and home (a prophesy that has failed to come true) and in 1992, the federal Wild Bird Conservation Act effectively banned further imports of monk parakeets into the United States. Laws regarding ownership of the potential pests, however, remained at the discretion of individual states, and breeding and sale of monk parakeets within the U.S. is still common.

Bird on a wire
Not exactly rabbit-like in breeding rate, established U.S. monk parakeets didn’t become the disastrous crop pest some feared.† They have, however, had a notably negative impact on power lines. Monk parakeets are unique among parrots in their nesting habits. While most parrots nest as single pairs in tree cavities, monk parakeets build elaborate stick nests. And they do so en masse. The communal nests can balloon into gargantuan avian apartment complexes and require a solid foundation, such a large tree or the good, sturdy cross beams of a utility pole.‡ The big nests help the birds stay warm during winter, but the latter location preference has the unfortunate tendency of causing power outages. 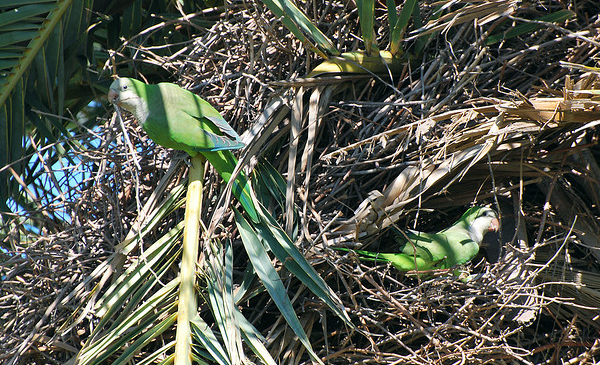 A study into the nesting patterns of New Jersey monk parakeets found that when the city removed their utility pole palaces, the indomitable parrots simply rebuilt nests in the same spot, sometimes beginning mere hours after the removal crew had cleared out. The authors suggested that providing alternative nesting sites (e.g. building bigger, cooler platforms a decent height above the part with all the wires) might accomplish more than periodic evictions. But perhaps they’re just a bunch of parrot-loving hippies? After all, one of the beneficial effects they attribute to the species is providing fun birding opportunities for us city folk. 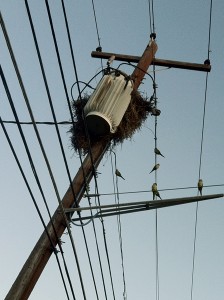 A smaller parrot condo at an undisclosed location in central Austin.

Nevertheless, man and bird may have to work out some sort of compromise, as the monk parakeets don’t seem to be going anywhere. For my part, I’m considering going into the business of urban wildlife safaris. I know all the hotspots where these little green guys nest and hang out. And for a small additional fee, I can also show you a Hitchcock-level supermarket parking lot full of squawking grackles. I recommend wearing a wide-brimmed hat.

* The word “parrot” refers to members of the order Psittaciformes, whereas “parakeet” refers to a number of different species of parrots that are generally on the small side and have long tail feathers.

† The initial population explosion of monk parakeets in the United States is more likely a result of multiple releases of the birds through the pet trade than of true exponential population growth.

‡ Palm trees are also a popular choice, where available.