Lifeform of the week: Corpse flower

Parasitic flowers of the genus Rafflesia are monstrous in size and diabolical in smell.

To kick off the Halloween weekend of candy consumption, costume concocting and ghost story telling, I present to you a most fiendish lifeform, one that lurks in the dark and spooky rainforests of southeast Asia leeching life from innocent tree roots: a strange entity known as the corpse flower. 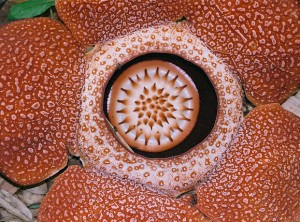 Personally, I think the inside looks a bit like a meringue pie. Image Credit: col&tasha.

The common name corpse flower refers to the genus of plants Rafflesia, which are found in Thailand, Peninsular Malaysia, Sumatra, Java, Borneo and the Philippines. While the name may conjure images of zombies or vampires, the corpse flower actually earned this moniker for its ghoulish smell. Carrion flies are the plant’s main pollinators, and it attracts them by emitting their favorite scent, the aroma of putrefying flesh. Gullible flies flock to what their senses tell them is their preferred feeding and breeding ground – a bloated animal carcass – but is actually the pollen-coated center column of the corpse flower. They come away disappointed but also dusted with the corpse flower’s pollen, which they can now unwittingly transport to another of these cunning plants. 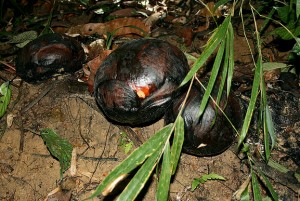 Aside from the impressive ability to accurately replicate the stench of death, corpse flowers can’t do much for themselves. They lack roots, leaves and even chlorophyll and must obtain both water and nutrients through a life of parasitism. Their chosen hosts are plants of the genus Tetrastigma (a viney member of the grape family). Corpse flowers set up shop in roots and stems of these plants and remain concealed there until they have sucked up enough nutrition to burst out of their host. Only their characteristic five-petaled flowers emerge into the daylight world. At first these appear as small compressed buds, which will grow for several months before blooming (at night in some species) into flowers.

Much of the corpse flower’s other activities are shrouded in mystery. While pollination is accomplished through the scamming of insects, the system of seed dispersal remains unknown, though small mammals may play a role in this process as they’ve been known to nibble at the stinky flower’s fruits – berries with tiny seeds. How the plant infects its host is another secret the furtive plants have been reluctant to share with science. 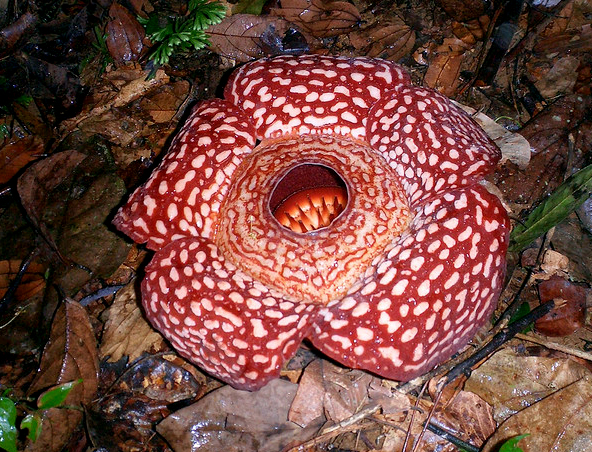 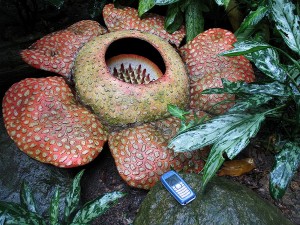 Corpse flowers aren’t only famous for their odor; they are also noteworthy for producing the largest single flowers of any flowering plant. While the genus Rafflesia holds some smaller species too, its bigger representatives (such as Rafflesia arnoldii) can reach a full meter in diameter and weigh over 20 pounds (about 9kg).

This (among other reasons) may not make the corpse flower the most practical plant to give for birthdays and anniversaries. It is, however, a coveted attraction for adventurous tourists. The blooms are over pretty quickly, though, and you’ll need to go during the rainy season if you want to see the action. 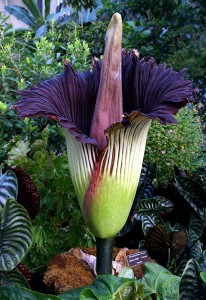 As if one giant stink plant weren’t enough to give you nightmares, there is another completely separate species out there going by the nickname of “corpse flower.” The species Amorphophallus titanium (you can decode the Latinization of that one on your own) shares the Rafflesia’s creepy common name. Since this plant pollinates through the same insect trickery as its namesake, the pair also share their ability to assault the senses of anyone who doesn’t find the smell of the grave alluring. And this corpse flower even has its own size superlative – it is the proud owner of the largest un-branched inflorescence (that conspicuous phallic thing in the center). But thankfully, like zombies and vampires, these two corpses are pretty easy to tell apart by their visual differences.

* In case you haven’t listened to the song recently, that line is from Vincent Price’s “rap” on Michael Jackson’s Thriller.