Lifeform of the week: Skunks

Evolutionary biology can explain skunks’ striking appearance, but only chemistry can get rid of the smell.

As a mid-sized mammal, sharing terrain with larger carnivores, there are several approaches you can take to avoid becoming their prey. You can run, you can hide, or you can emit a smell so disgustingly foul that only the most desperate of predators would ever consider eating you. Skunks have opted for the latter strategy and it has served them well. They’ve even evolved striking warning coloration – a rarity among mammals – to advertise their ability to launch an olfactory assault. Most animals are happy to give skunks plenty of space. But naïvely-enthusiastic pet dogs are the frequent recipients of skunks’ defensive weaponry, potentially bringing this sensory battle right to your doorstep.

Skunks are a New World menace, found mostly in the Americas. However, two Southeast Asian species of “stink badger” have recently been reclassified as skunks. Skunks come in a range of patterns and sizes, but all share the distinct high-contrast juxtaposition of black and white. 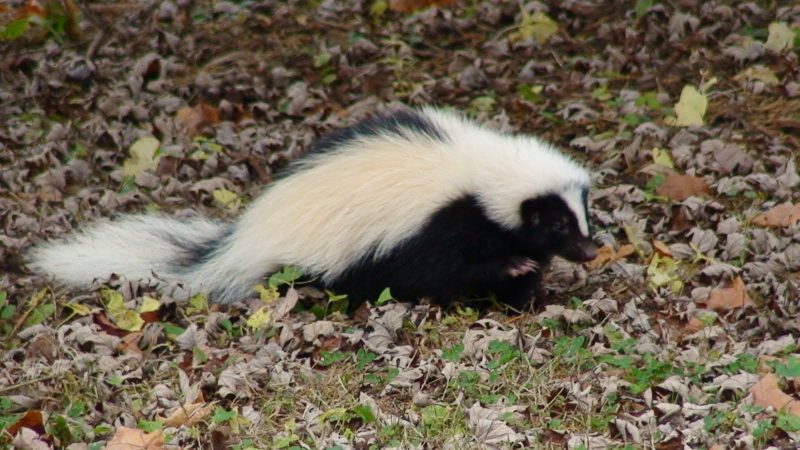 The most familiar of these animals is the striped skunk. Adorned with white racing stripes down the sides of its black body, it is the skunk which most closely resembles Looney Tunes’ Pepé le Pew – the cartoon character who, for many urban children, was the first introduction to the concept of these smelly creatures.* Not all skunks chose to adopt this archetypal style. The hooded skunk, for instance, wears a single thick white stripe from head to tail, and several species of spotted skunks bear swirling splotches of white and black fur. 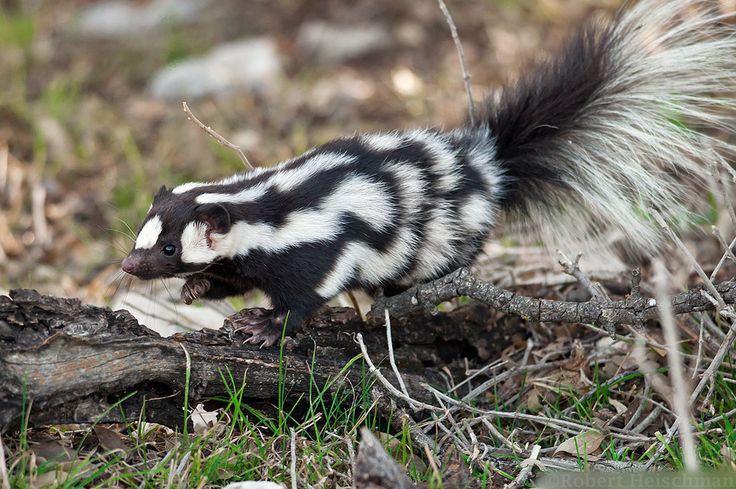 Skunks are omnivores, and rather adaptable ones at that. They will adjust their diets to what is available in a given season or location. In areas with an ample human population, skunks often find their way into trash. Apparently they are also rather fond of cat food, so you might want to rethink installing that cat door.

Generally nocturnal, they are particularly active around twilight. While they don’t fully hibernate, skunks in colder climates sometimes huddle up in dens to wait out the most brutal weeks of winter.

According to the Internet, skunk spray is not a happy smell. Descriptions offered in return for the Google search “what does a skunk smell like?” referenced expected vile odors like cat pee and rotten eggs, but also frequently evoked the more surprising “burnt rubber.” Quite the sensory cocktail.

Unlike the chemicals produced by venomous reptiles, skunk spray isn’t a major health hazard. It’s more of an irritant than a toxin, but it is a powerful irritant. Close range exposure to the secretions has been known to produce severe nausea, headaches, and even vomiting. It can also be painful to the eyes, where skunks like to aim their stink bombs. While not permanently damaging, the spray is highly incapacitating.†

Thiols give skunk spray the bulk of its stench. These are organic sulfur-containing compounds that produce strong odors like those of onion and garlic.‡ The oiliness of the spray allows it to cling to everything it touches and makes it almost impossible to get out of fabrics. If you are ever sprayed by a skunk, you may just want to incinerate whatever clothing you were wearing at the time.

Waving a (black and) white flag

An animal that defends itself with secretions, be it venom or stink juice, must expend energy to replenish these supplies. It is therefore beneficial to alert predators to one’s ability to deploy these weapons without actually having to use them. Enter warning colors.

Dangerous reptiles are well known for employing flashy colors and patterns to advertise their ability to cause harm, but warning coloration is not so common in mammals. Spots and stripes in mammals are generally used to blend into the environment rather than to stand out from it. What makes skunks so special? A recent study published in the journal Evolution examined factors that may have contributed to the development of such eye-catching coloring in mammals. 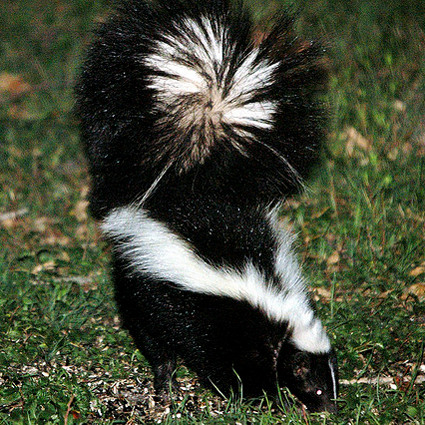 The authors examined the correlation of animals’ fur color with their ability to kick up a stink, and also with their body shapes, activity patterns and habitats. What they found: Not only are high-contrast black and white patterns an indicator of a species capable of producing especially rank anal gland secretions, but also such coloration is most frequently seen in animals with stockier bodies (those that aren’t agile enough to run fast or climb trees) and in those who live in more open environments (without a lot of foliage to camouflage themselves against).§ Skunks, who fit into all of these categories, rely on their color and fragrance adaptations to lumber about freely in what would otherwise be a dangerously-exposed habitat. Their nocturnal lifestyle makes black and white the best choice for getting attention, as contrast is easier to spot in the moonlight than are vivid hues. The authors also found that species with horizontal white stripes along the sides of their bodies (like our friend the striped skunk) were more likely to be able to spray their defensive malodorants with great precision. This suggests that the stripes essentially work as arrows drawing attention to the offensive glands at the rear of the body.

Wild animals that share turf with skunks read these signals and usually heed the warnings. Skunks are not the most popular food in the field.

What will eat a skunk?

So does this mean that skunks are impervious to predation? And, if so, why haven’t they taken over the world by now? Skunks do occasionally find their way onto the (mostly figurative) dinner tables of other species. Birds of prey, whose sense of smell is often not the best, scoop them up with some regularity. And once in a while, when pretty much every other option has been exhausted, hungry mammals will take their chances and go after the little black and white stinkers. 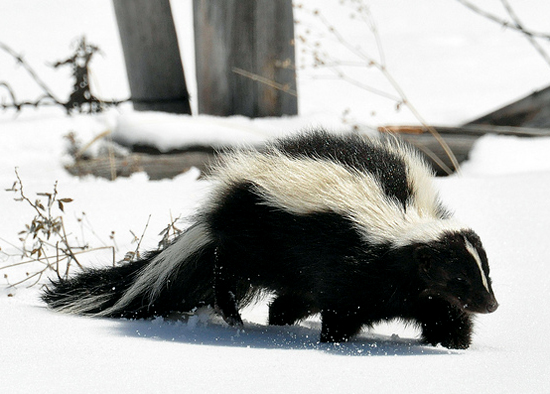 Mostly, skunks just don’t live very long in the wild. They’re lucky if they last three years (though they can apparently survive considerably longer in captivity). Harsh winters can knock off a good proportion of skunks. Cars are another threat; skunks’ vision is not their strong suit, so they’re prone to ending up as road kill. And let’s not forget rabies. According to the Centers for Disease Control, skunks account for 23.9 percent of rabies cases in animals in the U.S. They’re behind only raccoons (34.8 percent of cases) and bats (24.3 percent of cases).

Despite all the fun facts I’ve told you, some of you may still want to bring a skunk home and teach it to play fetch. As with other non-traditional pets, laws on keeping skunks in your house vary by state in the U.S. If your state does allow you to do this, you are currently also permitted to have your new family member’s stink glands surgically removed.** Though this could change in the future. In 2006, Britain passed the Animal Welfare Act – legislation prohibiting various cosmetic procedures that benefit pet owners rather than pets, including declawing of cats, de-barking of dogs, and de-stinking of skunks. Of course, only UK animals are protected by this, but once American pets get wind of the new provisions, they will probably unionize and make similar demands. 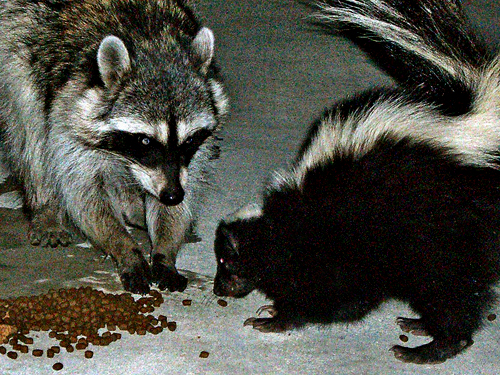 So you’ve opted to leave skunks be, and have instead procured a conventional canine companion. All is well. Then one day your dog comes home distressed and reeking of skunk. What do you do? The oft-repeated suggestion that tomato juice neutralizes skunk odor turns out to be a myth and will merely yield a dog that smells like skunk spaghetti. If you want to relieve your unfortunate pet of its sensory affliction, you’ll have to embrace chemistry to find a reaction that will turn the thiols of skunk spray into less smelly molecules. Commercial products exist to handle the fiasco, but if the stores are closed, you can also use a mixture of baking soda (1/4 cup) and hydrogen peroxide (1 quart).†† Throw a bit of liquid soap in there too to help break up the oils. Lather, rinse and repeat as needed. The downside is that the chemicals might alter the color of your pet’s fur. But would you rather have a dog with a 1980’s surfer hairdo or one that smells like the inside of a dumpster?

* Poor Pepé was inaccurately depicted as emitting a constant odor, whereas real skunks spray only when threatened. Though I guess skunks in the wild also generally don’t talk or attempt to seduce cats.

† The idea that sensory assault alone could deter an attack has not been lost on developers of military/law enforcement technologies. In 2008 Israel subjected protesters to a new crowd-control method, dousing them with a “totally harmless” but foul-smelling liquid appropriately named Skunk.

§ The authors also suggest that the more swirly patterns of spotted skunks, who are smaller than striped skunks, may function as camouflage from a distance and warning coloration up close.

** I have no idea how they manage to anesthetize the skunks without everyone in the veterinarian’s office getting sprayed.

†† Use the concoction immediately, as it soon loses its de-stinking powers.