Lifeform of the week: Puffer fish

Killer sushi, stoned dolphins, and zombies; the puffer fish is an animal steeped in scandal.

For such a dangerous creature, the puffer fish’s appearance is almost comically harmless. Portly and bug-eyed, puffer fish totter through tropical waters looking like the perfect target – meaty, juicy, and too slow to get away. But predators might think twice about pursuing them, as puffers are among the most poisonous animals on earth. Not venomous, mind you, they don’t bite or sting. But their bodies harbor a toxin 100 times more lethal than cyanide. Each year, dozens of adventurous human diners (and an untold number of underwater gourmands) are stricken with puffer fish poisoning. Not all of them live to see another meal. 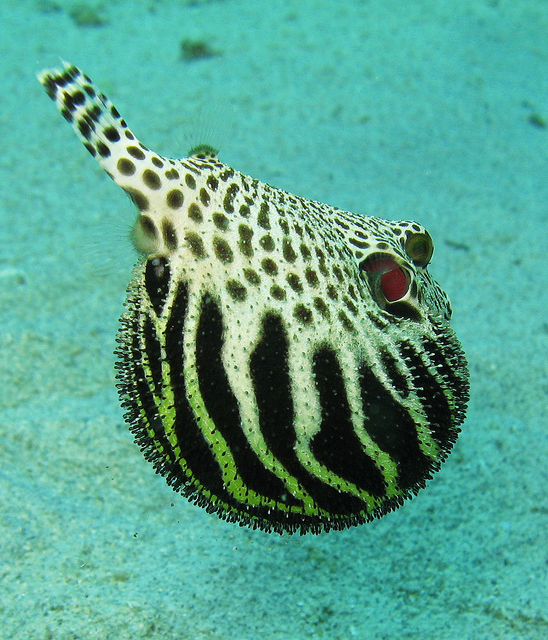 There are over one hundred species of puffer fish, members of the family Tetraodontidae*, found throughout the world’s oceans, as well as several freshwater species. Species vary in size and color but all share a common defense mechanism. You see, puffer fish aren’t trying to poison you for sport. They’d really prefer not to be eaten at all. Their common name (they’re also known as blowfish) comes from their tendency to expand into prickly, unwieldy balls when threatened. Puffers accomplish this with the aid of their highly elastic stomachs and the sharp spines (modified scales) lining the outsides of their bodies. When the fish are just going about their business, these spines lie flat, but at the first sign of danger, puffers gulp down copious amounts of water, rapidly inflating themselves and causing the spines to stand on end. Most predators find this configuration to be decidedly less tasty looking.

But for those undeterred by the prospect of swallowing a spiky water balloon, the puffer fish also has its infamous poison: tetrodotoxin. Tetrodotoxin (TTX) is a neurotoxin that blocks the sodium channels that regulate nerve and muscle function. Depending on the amount of poison ingested, symptoms can range from mild (tingling and numbness in the lips and mouth) to increasingly alarming (limb paralysis) to outright dire (respiratory failure, death). Regrettably, unconsciousness is not a common symptom, so victims get to remain awake and alert for the better part of their agonizing death. 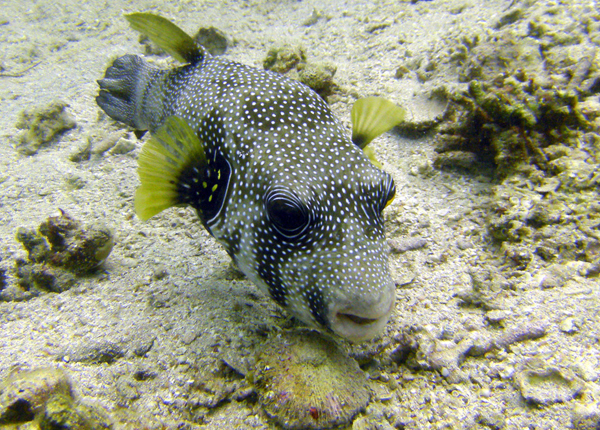 Puffer kicking back and enjoying its toxicity. Image: Matt Kieffer.

While it was originally assumed that puffer fish synthesized tetrodotoxin on their own, the current belief is that they probably obtain it from the food chain, tracing back to tetrodotoxin-producing marine bacteria. Meaning that puffers eat something that eats something that eats the toxin-producing bacteria. Several observations support the food chain theory. For one thing, it turns out that numerous other animals also have tetrodotoxin in their arsenal, including poison dart frogs and the blue-ringed octopus (which will bite you, so watch out). It’s unlikely that all these creatures independently evolved the ability to synthesize a complex molecule like tetrodotoxin. More importantly, puffers in captivity can be bred to be non-toxic by rearing them in water free of the poison-making microbes.

So what’s really impressive is that puffers (and the rest of their tetrodotoxin-eating ilk) are able to safely accumulate the toxin. If I were to go out and try to gather tetrodotoxin through the food chain, I wouldn’t develop the amazing ability to poison my enemies, I’d just get sick and die. The difference is that, unlike humans, puffer fish have evolved a resistance to TTX. They can still be poisoned by the toxin, but it would take much higher volumes of it than is required to kill a non-resistant organism.

Even in the wild, not all species of puffers are poisonous. The non-toxin species are far less resistant (though not completely un-resistant) to TTX than their poisonous peers. Additionally, some predators appear to have evolved tetrodotoxin resistance for the privilege of eating the very animals who use it to defend themselves. Several species of garter snakes dine with impunity on toxic newts. Humans, let me remind/warn you, are still easily poisoned by tetrodotoxin. And yet there is…

Poor puffer fish, they went out of their way to be inedible only to become one of the most expensive delicacies in marine cuisine. Japan is the epicenter of puffer fish – or fugu, to use the local term – consumption, and thus also has the highest occurrence of tetrodotoxin poisoning. Though puffer poisoning also occurs in other countries, such as China and Taiwan, and occasionally even crops up in the U.S. (more on that in a minute).

Tetrodotoxin content in puffers varies between species and even between individuals of a single species. The concentration of the toxin is generally highest in the liver and ovaries of the fish, though this too varies by species. Skin, intestines, and testes can also pack a good amount of TTX. With the exception of one species (Lagocephalus lunaris) most puffers don’t have much toxin in their muscle, leaving the meat itself more or less safe for human consumption. Needless to say, the preparation of fugu is a delicate operation. Japan requires fugu chefs to go through all sorts of education and certification before they’re allowed to prepare the animals for costumers. And restaurants have been banned from serving fugu liver since 1984 (yes, some folks like to eat the most poisonous part). 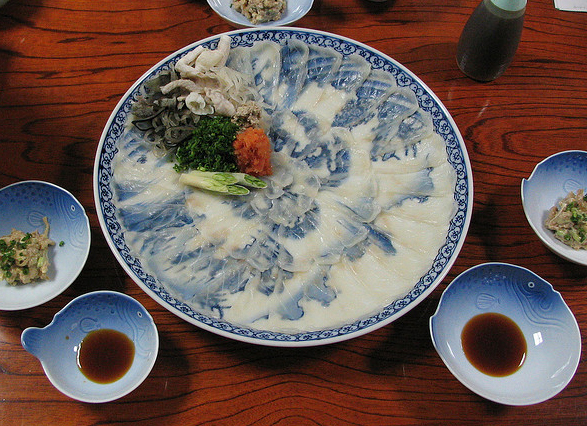 Fugu sashimi is the most popular puffer fish dish, but they can also be baked, fried, or made into a tasty soup. Whether one opts for raw or cooked fugu makes no difference in terms of mortal peril, as cooking does not destroy tetrodotoxin.

With all the precautions taken by Japan’s restaurants, most puffer poisonings now occur due to ill-advised DIY fugu meals. (Homemade cookies are a great idea, homemade fugu, not so much.) Species misidentification can also be a problem. Earlier this month, the CDC reported on a 2013 case of non-fatal tetrodotoxin poisoning in my hometown of Minneapolis, Minnesota. The toxic meal was prepared from dried puffer fish purchased from a street vendor in New York City, which unfortunately was of the L. lunaris species (the one with tetrodotoxin in the meat). Bad luck that, though perhaps it’s just a bad idea to buy potentially deadly foodstuffs in the same place one shops for knock-off Channel handbags.

A more drastic case of fishy mistaken identity occurred in 2007, when two people in Chicago consumed imported fish labeled as monkfish, which turned out to be – you guessed it – puffer fish. Since mislabeled seafood is an all too common problem you might want to start DNA testing your dinner before you dig in.

Do dolphins really use puffer fish to get high?

Meh. Maybe. Maybe not. Toward the end of 2013 various news outlets were really excited about footage from a BBC documentary showing a group of dolphins allegedly gnawing at a puffer fish for the express purpose of getting high on tetrodotoxin. 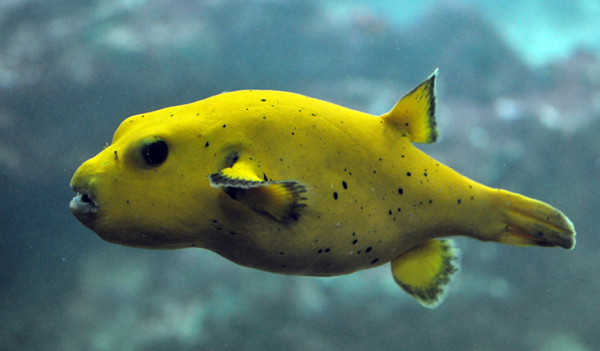 Was gonna use a pic of dolphins here, but why when I can show you this handsome devil instead. Image: Citron.

If so, this wouldn’t be the first observed instance of possible recreational drug use in non-human animals, or of dolphins engaging in behavior unsuitable for the plot of a Disney film. Still, I’m with the skeptics on this one. Even for animals who don’t have better options like wine and coffee, tetrodotoxin seems like a pretty suboptimal drug. Beyond the whole muscle paralysis and death thing, its less lethal effects aren’t especially pleasurable either. Tingling sensation in the mouth and lips, and light-headedness sound reminiscent of a trip to the dentist and a bout of altitude sickness, respectively. E.i., not much fun at all. The mild buzz some humans partaking of fugu liver claim to experience likely has as much to do with the thrill of cheating death as with the physiological effects of tetrodotoxin.

And while it’s fun to anthropomorphize animals (I’ve done it at least twice in this article alone), we don’t actually know what’s going on in their brains, and the behavior could mean any number of things. One viewer’s dolphins-passing-a-joint is another’s dolphins-batting-around-a-hacky-sack. Take your pick.

Nowadays we know that if you want to create zombies, you either need to get a comet to pass too close to earth, or unleash a virus concocted in a top secret laboratory by foolhardy scientists. But back in the 1980s, people briefly thought you could turn regular humans into zombies by dosing them with tetrodotoxin. This was thanks to the work of a young Harvard ethnobotanist** named Wade Davis, who published several papers and eventually a book speculating that tetrodotoxin was one of the active ingredients in the so-called “zombie powder” of Haitian folklore, used to transform the living into zombie slaves doomed to serve the sorcerers who raised them from the grave. [While we’re on the subject, the book Davis wrote about his adventures gathering zombie powder – The Serpent and the Rainbow – was later made into a horror film directed by Wes Craven (of Nightmare on Elm Street fame), the TV ads for which kinda freaked me out as a kid.]

Let me clarify that Davis never claimed anyone actually died and was reborn as a zombie. He merely proposed that tetrodotoxin was used to stage the death-like experience that would convince susceptible victims of their own zombification. Sadly Davis didn’t do a great job testing his hypothesis. Though he went to great lengths to purchase zombie powder from the locals, no formal experiments demonstrated its efficacy. And only trace amounts of tetrodotoxin were found by chemical analysis of the samples. In short: interesting idea, but it doesn’t look as though puffer fish play much of a role in the zombie legend. 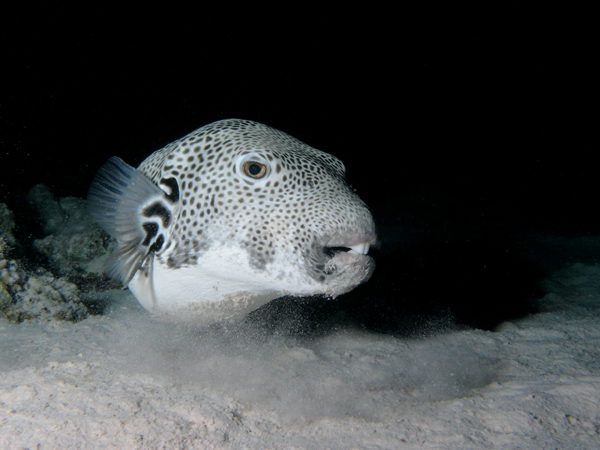 Don’t worry, puffer, I think those teeth give you character. Image: Alexander Vasenin.

In case you were wondering, tetrodotoxin was named after the family Tetraodontidae, not the other way around. The toxin was first isolated in puffers and thus saddled with their family name. So where does the name Tetraodontidae come from? The puffers’ unique dentition. The name roughly translates into “four teeth”, which is what you would find if you managed to pry open a puffer fish mouth. These four large teeth, two on the upper and two on the lower side of the jaw, give the puffer’s mouth a rather beaky appearance, but they’re handy for crushing prey items. And your fugu needs to eat too.

* Porcupine fish (family Diodontidae) are also occasionally also referred to as puffer fish. Both belong to the order Tetraodontiformes and share many qualities (like the ability to inflate themselves when threatened). I’m having a little trouble telling them apart, so my apologies if I’ve mistakenly included some porcupine fish images in this post.

** Ethnobotany is sort of like anthropology, but with a focus on human interaction with plants.

This article was originally published on January 18, 2015