Don’t call the Portuguese Man o’ War a jellyfish. And don’t get near its stinging tentacles, even if it’s dead.

I was splashing around in the waves of the Gulf coast when I saw it – a translucent bluish blob floating on the surface of the water. “Is that a jellyfish?!” I yelped. “Yeah,” my boyfriend replied, “Looks like a Man o’ War”. We followed it as it drifted to the shore. I was becoming less convinced. “No, it’s just a bag, or maybe some trash.” The form was too synthetic looking to be an animal. But what washed up on the sand was neither plastic bag nor jellyfish. The Portuguese Man o’ War may look like a jellyfish*, but it’s actually a colony of 4 different polyps, each working together to form a functional “individual,” if you’re willing to stretch your definition of that word.

It may be challenging to think of an animal classified by a single species name – Physalia physalis – as being four separate creatures, but such is the strange reality of this squishy thing. The parts are so interdependent that any one can’t survive without the company of the other three. Sort of like how a ship can’t sail properly without all its crewmembers. Except that — in this case — the skipper, first mate and the rest are all tangled together into one gelatinous mass. Allow me to introduce you to the crew:

Polyp 1 – The pneumatophore. The floaty part that sticks out from the water. It is for this gas-filled bladder that the collective organism is named, as it looks a bit like the old warship with lofty sails.

Polyp 2 – The dactylozooids. These are the infamous stinging tentacles. They average about 30 feet (9 meters) in length but can be as long as 165 feet (50 meters).

Polyp 3 – The gastrozooids. These guys are in charge of digestion. They are a cluster of bag-like stomachs found underneath the floaty polyp. 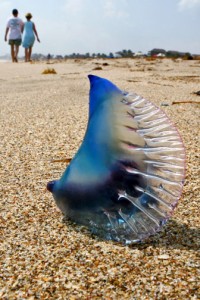 How does it eat?

The Portuguese Man o’ War lives mostly off of small or young fish. Catching and ingesting its prey involves a bit of teamwork. The tentacles dangle from the gas-filled float, paralyzing and trapping small critters with their venom. These tentacles also contain muscles that are used to ferry helpless fish to the digestive enterprise underneath the float. The bags of the digesting polyp break down the meal with enzymes, burp up anything nutritionally unusable and then distribute the good stuff to the rest of the colony. And that’s how a Man o’ War makes lunch. Go team!

How does it move? 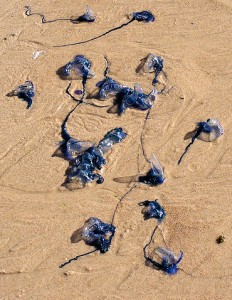 Swimming isn’t really an option for a cluster of sacks and strings like the Portuguese Man o’ War. Instead, they drift on the surface of the water, propelled by wind and water current. But the direction of their drift is not entirely determined by these environmental forces. The animals come in both “left-sided” and “right-sided” variations. A left-sided Man o’ War drifts rightward from the direction the wind blows, whereas a right-sided one drifts leftward. This results in a more even distribution of these organisms throughout the oceans.

Special bonus feature: If it encounters threats on the surface, a Portuguese Man o’ War can deflate its sails (the floaty polyp) and go into submarine mode for a bit.

What if it stings me?

These guys are found in much of the world’s major oceans (Atlantic, Pacific and Indian), generally in warmer portions (they’re especially common in the Sargasso Sea). Since their tentacles dangle like fishing poles rather than aiming at a specific target, items other than potential food can also run into their venomous nets. Being stung by a Portuguese Man o’ War is said to be excruciating, though rarely fatal to our own species. Still, you might want to keep a couple of things in mind. 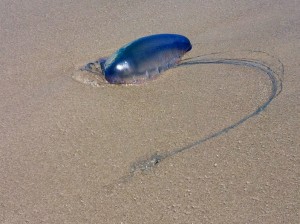 Our Man o' War looked a little worse for wear by the time I returned with the camera.

1) The tentacles still pack a punch long after the animal dies. So if you’re going to poke at a dead Man o’ War on the beach, I strongly recommend using a stick.

2) Don’t forget that these things are not jellyfish, so what works for jellyfish stings won’t necessarily work here. If you are stung by a Portuguese Man o’ War, do NOT pour vinegar on the wound in hopes of neutralizing the toxins. Man o’ War venom is a different chemical than jellyfish venoms, and vinegar just makes it angry. Fresh water isn’t much better. After removing any residual tentacle from your skin (with tweezers please, not your fingers), use salt water to clean the wound. It’ll still hurt like hell for a few days, but, hey, sometimes frolicking in nature has its price.

* The Portuguese Man o’ War shares as much as a phylum – Cnidaria – with “true jellyfish,” but after that it’s taxonomically its own man.