Lifeform of the week: Owls

In fact and in fiction, owls have always turned heads.

In keeping with a spooky October theme, I now invite you to cast your imagination toward the owl: a bird that has inspired humans to spin supernatural tales like few others. The emblem of Athena – the Greek goddess of wisdom – owls have been portrayed as harbingers of ill fortune in some folklore and, in more recent mythology, as deliverers of wizard mail in the Harry Potter series. What is it about owls that so evokes mystery? Their nocturnal habits perhaps? Or their haunting vocalizations?* Or maybe it’s their ability to turn their heads around nearly full circle. Even for those who don’t believe in ghosts and witchcraft, owls have more than enough natural quirks to make them the life of the Halloween party.

Who’s hoo
Currently existing owls are divided amongst two families: typical owls, also called true owls (Strigidae), and barn owls (Tytonidae). It’s easy to recognize the barn owls by their pronounced heart-shaped facial disks.† They look a bit like mimes, in my opinion, whereas typical owls look more like, well, a typical owl. The typical family boasts some of the largest and the smallest extant owls; giants such as the Eagles Owl can have wingspans of over 70 inches, while tiny birds like the Elf Owl sport a diminutive wingspan of about 10 inches and weigh in at just over an ounce. 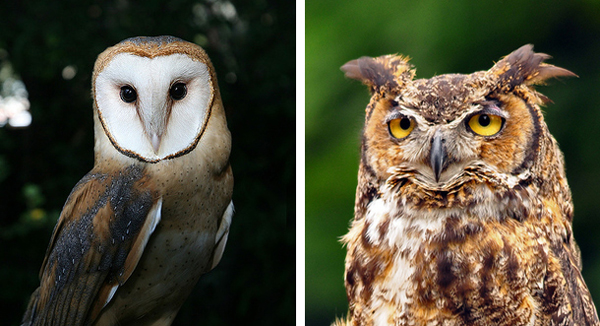 A barn owl (L) and a typical owl (R). Image via Jitze-Couperus and mybulldog

Night owls
Owls are creatures of the night; it’s one of their defining qualities. While there are some owl species that can be found out and about during the daytime, the majority are nocturnal. You may be thinking, “So what? There are plenty of nocturnal birds.” And there are. For instance: the Great Horned Owl, the Spotted Owl, the Eastern Screech-owl, the Western Screech-Owl, the Great Gray Owl… notice a pattern yet? Other nocturnal birds do exist (as well as species that are active around twilight), but nocturnal behavior is the exception for birds in general. For owls it is the norm. 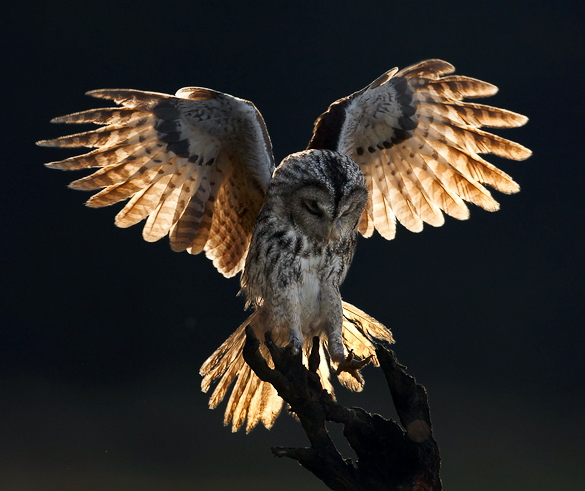 More quiet than it looks. Image via Martin-Mecnarowski.

Stealthy nighttime hunters, the feathers of nocturnal owls’ are engineered for silent flying. Front and back feathers on the wings are serrated and fringed to reduce the sound generated by flight, and a coating of soft, downy feathers on the rest of the wing and the legs absorb any stray flapping noises. Soundless flight not only allows owls to sneak up on their prey, it helps them hear what’s going on in the world without the distracting din kicked up by ordinary wing-flapping. (Think about how much easier it would be to listen to music on an airplane without the racket made by the engine.)

A group of owls is called a “parliament”, but the parliament doesn’t convene very often. Owls tend to be solitary and do not hunt in groups. They’re not much for nesting either. Unlike birds that painstakingly construct elaborate nests for their offspring, owls instead seek out ready-made abodes. They will lay their eggs in tree trunks, barns, burrows, and even the abandoned nests of other birds.

Sensitive senses
While many birds have eyes positioned on the sides of their head – an adaptation that is useful for prey species, which need to watch for predators from all angles – owls’ eyes (like those of our own species) point forward from the center of relatively flat faces. This arrangement allows for stereopsis, or stereovision: the ability to perceive three dimensional aspects of the world, such as depth and the distinction between background and foreground elements, good qualities for animals scanning the nighttime world in search of food. Owl binocular vision is similar enough to our own that a group of trained barn owls were recently used in a study as models to understand human vision.

The downside of stereovision is that owls, like humans, must turns their heads in order to see what’s in the periphery. They’re much better at it that we are though. While the idea that owls can turn their heads completely around (360º) is a misconception, they can manage an impressive 270º rotation. Outside movies depicting demonic possession, humans can only rotate their heads about 80 or 90 degrees to either side. 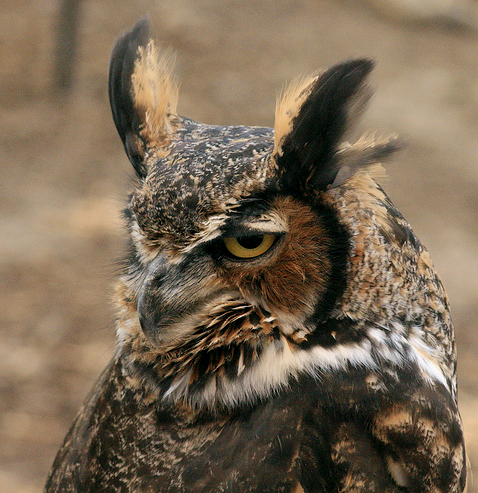 “I know what you’re thinking, pal, but those aren’t my ears.” Image via Cindy See.

Owls’ excellent hearing is another tool that helps steer them to their prey. Some species even have asymmetrically placed ears to better differentiate which direction a sound is emanating from. If this doesn’t correspond to your mental image of owls’ ears, it may be that you’ve never actually noticed their ears because you were too busy looking at the ear tufts. These are clumps of feathers on either side of certain species’ heads that stick straight up, making them look like ears or horns. The Long-eared Owl doesn’t really have long ears, nor does the Great Horned Owl have horns. Those are just their ear tufts. A number of hypotheses have been proposed as to why some owls would have evolved this arrangement of feathers – camouflage, communication, attempts to look bigger and scarier – but really, we’re just not sure what these things are for.

Rounding out the list of owls’ nifty physical attributes are their sharp beaks and talons. These allow the birds to catch and kill their prey (ranging from insects and small rodents to larger mammals and fish, depending on the size of the owl species). Lacking teeth, owls swallow their prey whole and later regurgitate any indigestible parts (bones, fur, etc.) in the form of pellets. Dissecting owl pellets is a popular science experiment to foist onto schoolchildren. You can even order your very own barfed-up owl pellets online if you’d like to have a go at piecing together what was for dinner.

The owls of Hogwarts
If you’re like me and have read every book in the Harry Potter series, you’re aware that owls figure prominently into the fictional world of wizardry. Like carrier pigeons, the birds work to deliver mail (“owl post”) and no wizard family is complete without at least one owl. Species and quality of owl vary in J.K. Rowling’s narrative. Here are a few of the more memorable pets:

Protagonist Harry Potter is given one of the more glamorous of the owls – Hedwig, a striking white Snowy Owl (Bubo scandiacus). The snowy owl is a large bird generally found in the colder regions of the northern hemisphere, including parts of the United Kingdom. It’s also one of the rare species of owl that is not nocturnal. 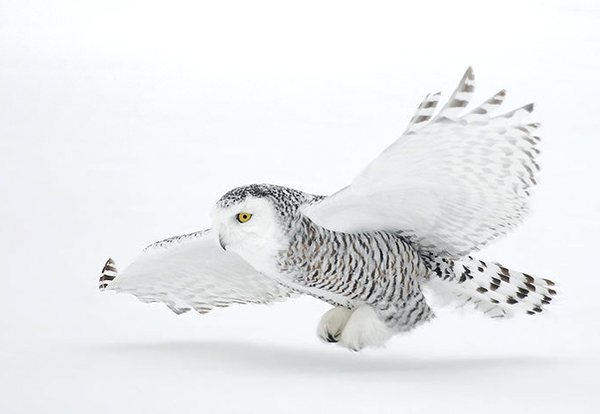 Snowy Owl on a snowy day. Image via David Hemmings.

In the first of the books, villainous schoolmate Draco Malfoy receives packages of candy from home via an Eagle Owl (Bubo bubo). One of the more enormous species of owl, Eagle Owls can capture and eat prey as big as a fox (though they often go for smaller mammals). They are top predators, with little to fear from any creature other than humans. Couple that with their prominent horn-like ear tufts and it’s easy to see why the Eagle Owl is the natural choice for transporting boxes of chocolates to a member of the house of Slytherin.

The cash-strapped Weasley family rely on a painfully past prime creature to deliver their mail – Errol, a Great Grey Owl (Strix nebulosa) with failing vision and barely enough energy remaining to carry an envelope, much less a gift package.‡ In reality, Great Grey Owls at their peak are less mighty than they appear at first glance. One of the largest owls in terms of wingspan, the species’ body is actually quite light relative to its length. The bird’s fluffy feathers lend it the illusion of a more stately mass. Great Grey Owls can sometimes live as long as 40 years in captivity, so the Weasleys likely had their owl for decades. Assuming, of course, that owl longevity is the same in wizard circles as it is for muggle-owned birds, and that all that package schlepping doesn’t shave too many years off the lifespan.

* Not all owls make hooting sounds. For instance, Australia’s Barking Owl exhibits a medley of disturbing vocalizations; from dog-like barks to shrill screams.

† The facial disk is a concave distribution of feathers around the face that is found in all owls. Owls can adjust the positioning of these feathers to direct sounds to their ears.

‡ In addition to poor old Errol, Weasley sons Percy and Ron have their own owls: a Western Screech Owl named Hermes and a Scops Owl named Pigwidgeon, respectively.