Lifeform of the Week: Monotremes are a true singularity

The egg-laying Cadbury Bunny is an invention of advertising, but monotremes are the real deal.

Sometimes nature is just weird. All your life you’re taught that mammals are distinct from reptiles and birds, and then one day you’re confronted with the platypus – an animal that manifests all the stereotypical mammalian traits like furriness and lactation, but for some inexplicable reason also lays eggs. You’re tempted to write it off and say, “well, the exception proves the rule”, but the platypus isn’t the only egg-laying mammal out there. There are also four species of echidna to contend with. Together they comprise the order Monotremata and, technically, they are mammals. Go figure.

What’s in a name?

To understand these taxonomical oddities, it’s probably best to start with the word “monotreme”, as scientific names often harbor explanatory information once translated. Perhaps in Latin “mono” plus “treme” means “utterly freakish” or “makes no sense” or simply “lays eggs”? Actually, it’s Greek, and the translation is “single” (mono) and “hole” (treme). This turns out to be a defining quality of these unusual animals. Unlike other members of the class mammalia, monotremes don’t have separate channels for their urogenital and digestive activities. Almost everything that enters or leaves the posterior half of their bodies passes through a single hole – the cloaca. You may have encountered that term before while reading about birds or reptiles, as these organisms also possess this all-in-one orifice. 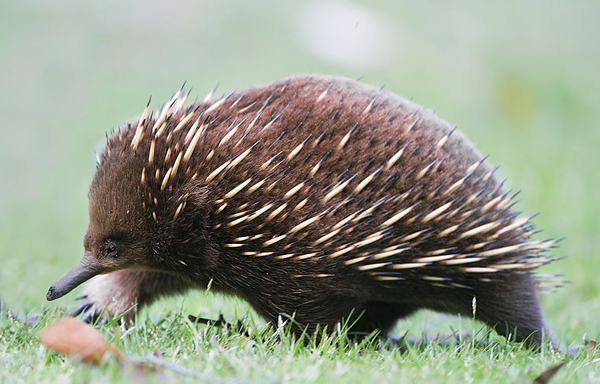 Monotremes were weird back when it was normal. Image Credit: Noodle-snacks.

In general, older species have simpler interiors (think jellyfish and hydras with their single digestive cavities). And monotremes are pretty old, first coming onto the scene about 166 million years ago.* As such they have traits in common with both reptiles and mammals. Modern monotremes are found only in Australia and New Guinea. Only five species are still in existence, the platypus and four species of echidna.

Music critics often try to characterize new bands as hybrids of existing ones. “They sound like So-and-So meets The Such-and-Suches with a dash of Something-or-Other.” This is also a convenient way of describing monotremes. Superficially, they look like hodgepodge recombinations of more familiar animals. Monotremes of the family Tachyglossidae resemble a blend of porcupine and anteater, earning them the nickname “spiny anteater”. But the more frequently used common name “echidna” gives some clue as to what’s going on under the hood. Echidna was a monster of Greek mythology: a beautiful woman on the upper half and a hideous serpent from the waist down. 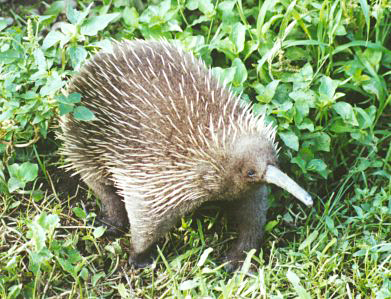 There are four species of echidna still in existence: the short-beaked echidna (Tachyglossus aculeatus), which resides in Australia and parts of New Guinea, and three long-beaked models (genus Zaglossus) found only in New Guinea.† They are long-lived and reproduce slowly.

Like the anteaters they resemble, echidnas eat a lot of bugs and other creepy crawlies. All adult monotremes lack teeth. The short-beaked echidna opts for primarily termites, using its long sticky tongue to catch the insects. The long-beaked versions, which have handy, prey-hooking spikes on their tongues, prefer a diet of earthworms. 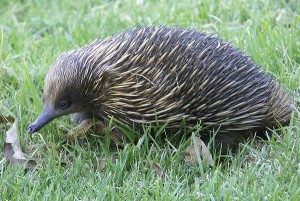 The short-beaked echidna is more common and better studied than its long-beaked cousin, so much of what we know of echidna reproduction comes from this species. While echidnas lay reptile-like eggs, they don’t just deposit an egg and hit the road. The echidna is equipped with a pouch, which protects the egg until it hatches and can also carry the newly-emerged offspring (called a “puggle”). At first, the young are pretty helpless – typical mammals in at least one respect – and are nursed with their mother’s milk. Another peculiar omission in monotreme anatomy is nipples. Instead milk just seeps through patches of the mother’s abdominal skin. I know, kind of icky, but it seems to gets the job done. Eventually the kids are booted from the pouch and hang out in the nesting burrow while mom goes out to forage.

The male echidna’s penis is itself something of mythological monster: a terrifying four-headed tetra-phallus. A 2007 study demonstrated that only two heads are used at a time, while the other half presumably recharges. The whole arrangement is reminiscent of the reptilian hemipenis exhibited by snakes and lizards. If you want more of the gory details of monotreme intercourse, be my guest. I’m politely moving on to the next topic…

If you thought the echidna was strange, brace yourself the platypus (Ornithorhynchus anatinus). This duck-billed, beaver-tailed, egg-laying abomination of reason is the emblematic animal kingdom WTF. Lone member of its genus (and family, for that matter), the platypus lives in aquatic areas of eastern and southern Australia, including Tasmania. Webbed feet help it swim, but it’s also equipped with claws for burrowing, and, hmm, electro-receptors for underwater hunting. Oh, and it’s venomous, but we’ll get to that in a minute. 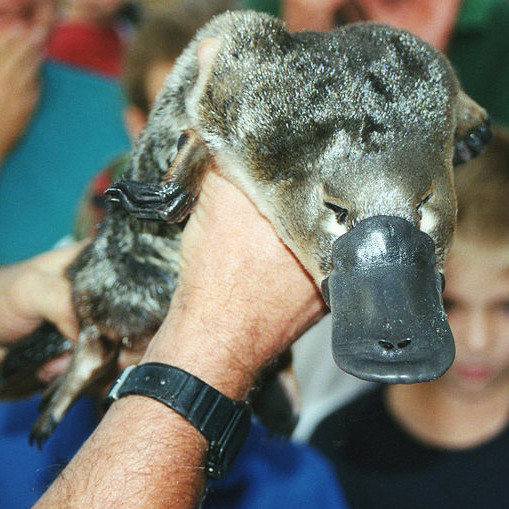 So about the duck bill… It’s not the standard open-and-shut hard bird beak, but rather a flexible, skin covered sensory organ, with nostrils on the upper side and a mouth on the lower side. The bill also contains the aforementioned electro-receptors as well as pressure sensors, both of which are used to locate prey in murky waters (the species is most active at night). In another unexpected function of form, the beaver-esque paddle tail is used to store fat reserves.

A female platypus does not have the echidna’s egg-pouch, and instead incubates her eggs in a nesting burrow constructed on the banks of the water. She does, however, nurse her offspring from similar monotreme milk patches.

The male platypus is one of the rare examples of a venomous mammal, and is unique in its method of venom delivery. The poison is ejected not from fangs but from spurs located on the animal’s hind legs. The venom is used in fending off both predators and competing males. 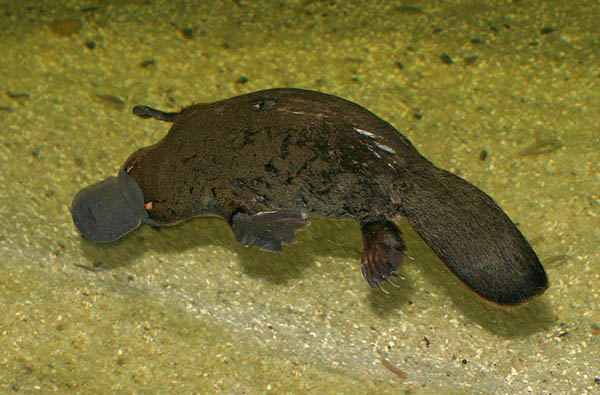 In 2008 the platypus made the news when it had its genome sequenced (second fiddle echidnas are still waiting for their moment in the genetic limelight). One of the more interesting quirks of the species’ 52 chromosome karyotype are its sex determining chromosomes. Not content with the traditional XX/XY pairs used by most mammals, the platypus carries a set of ten sex chromosomes.‡ It may sound like a horrible mess, but it’s actually reasonably organized. During meiosis (when gametes are produced) the sex chromosome split into two chains. So the male platypus, genetically XYXYXYXYXY, produces sperm with either 5X or 5Y chains. Why so many chromosomes then? Who knows. Considering all the other bizarre qualities exhibited by this animal, it’s hardly even the most pressing question.

* The basic concept is that you have your primitive proto-mammals plugging along for a good chunk of time before that and somewhere between 160 and 210 million years ago, they diverge into monotremes and another camp that becomes marsupials and placental mammals.

† Monotremes are endemic to Australia and New Guinea.

This article was originally posted in May, 2012.