Lifeform of the week: Mistletoe 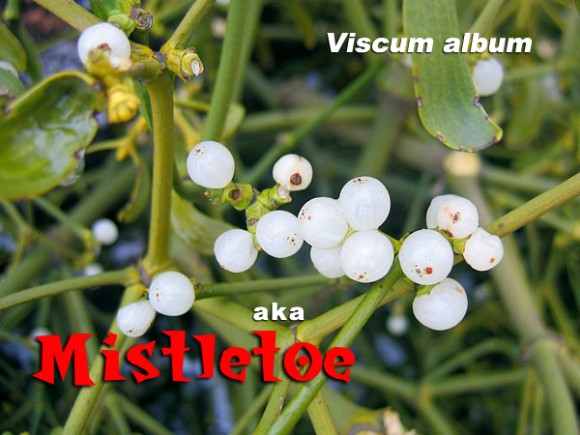 The quaint holiday decoration you invited into your home and hung over your doorways is a vicious parasite that leeches nutrients from innocent host trees. It is riddled with cytotoxins, and its seeds are dispersed via bird crap. Merry Christmas. 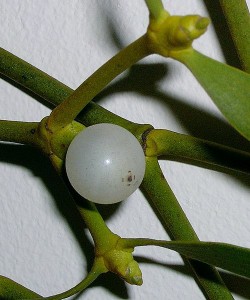 Makes for a far nicer centerpiece than a jar of tapeworms. Image Credit: Kenraiz.

Not all parasites are creepy-crawly worms or protozoans. Some are cheerful-looking shrubs with dainty white berries. Viscum album is one species of mistletoe*, a group of parasitic flowering plants in the order Santalales. It is an obligate hemiparasite. This means that while it does not derive all of its sustenance from a host plant, it does need some interaction with the host to reach its mature state.† As a hemiparasite, mistletoe need only steal from its host tree’s xylem, the transport tissue that handles water and water-soluble nutrients. It is gracious enough to eschew the host’s phloem, which transports sugars. This renders it less of a pathogen, as the host loses water but not food to the parasite. 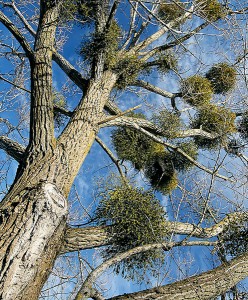 Mistletoe bears a fruit that some birds find delicious. The seeds of these berries are covered in a gluey substance called viscin. Birds eat the berries and then fly off to another tree where they eventually expel the digested remains of the fruit, its viscin coating still adhering to the seeds. The sticky seeds cling to the new branch and begin to grow. As it enlarges, the plant forms a peg that drills through the host branch and eventually reaches the xylem. Now the parasite develops its haustorium, a root-like appendage that allows it to siphon nutrients from the host.

Viscum album is native to Europe and parts of Asia. It is the original Christmas mistletoe, a leafy green shrub adorned with white berries. It has a wide host range, infecting over 450 tree species, including both hardwood and coniferous varieties. So, yes, hypothetically your Christmas mistletoe could attack your Christmas tree (were it still planted in the ground, of course). 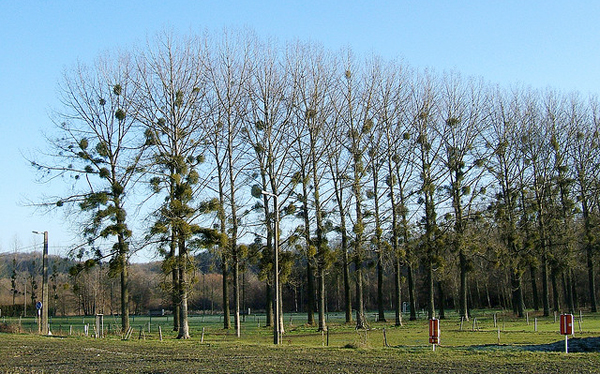 In 1900, Viscum album made its way from Europe to the new world, as horticulturist Luther Burbank deliberately allowed the plant to infect trees in Northern California so that the parasitic shrub could be harvested for Christmas decorations. Over the past century it has expanded its territory by about four miles, which isn’t exactly cause for alarm. Despite Burbank’s efforts, most U.S. holiday make-out mistletoe is more likely to be Phoradendron flavescens, which is native to North America.

Can it hurt you?

Mistletoe contains strong cytotoxins (harmful to cells). Those festive white berries are fine for the birds, but you should definitely not add them to Christmas fruit cake. Nor should you feed them to your dogs or cats or children. Ingesting mistletoe can cause gastrointestinal problems and slow heartbeat, among other things. If anyone at your holiday party eats more than a couple of them, you might want to call poison control.

Can it help you? 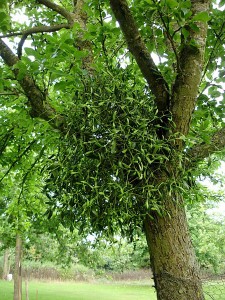 Mistletoe may offer humans something beyond just a flimsy excuse to steal a kiss. In Europe, Viscum album extract (VAE) is widely used in the treatment of cancer, often under the name Iscador. The idea of mistletoe as cancer therapy was first proposed by Rodolf Steiner. Though more a philosopher than a scientist, Steiner delved into the idea of complementary medicine during the latter half of his life.‡

Clinical trials of VAE have not always demonstrated consistent results, and many doctors, particularly in the U.S., are skeptical of its efficacy. In Europe it is generally used as a complementary, rather than primary, cancer treatment, and is credited more with improving quality of life than increasing survival rates. Still, given the unpleasantness of cancer therapies, such an improvement would be a decent contribution to society. Especially for a parasitic lowlife like mistletoe.

What does this have to do with Jesus and/or kissing? 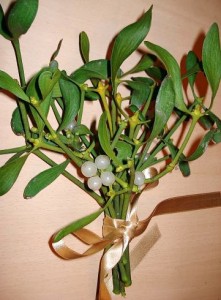 Mistletoe dressed up and ready to party. Image Credit: Dorocia.

As far as I can tell, very little. Like many peculiar holiday customs, mistletoe usage likely predates Christianity. It crops up in discussions of Norse mythology and Druid rituals, but nobody seems able to form a cohesive narrative of how it came to be that a person could demand a kiss if they managed to lure somebody under the hanging holiday decoration. Most references to mistletoe as a Christmas ornament appear in the 18th century or later, by which time its role was already established.

I consulted a few scholars of things European and didn’t get anything more concrete. I did, however, learn about a popular 19th century song called The Mistletoe Bough, which tells the whimsical, light-hearted tale of a young bride who suffocates in a chest while playing a game of hide and seek. How’s that for holiday cheer?

* I will refer to Viscum album throughout this article as mistletoe. However, multiple plants go by that moniker. To properly distinguish it from its fellows, it should be addressed as European Mistletoe, or Common Mistletoe.

† As opposed to an obligate parasite, a facultative parasite can, in a pinch, grow without the aid of a host. A holoparasite, in contrast to a hemiparasite, lacks chlorophyll and thus cannot photosynthesize. It is completely dependent on its host for both water and carbon (aka food).

‡ Steiner was also the founder of “anthroposophy,” which is described as a “spiritual philosophy.”