Lifeform of the week: Leafcutter ants

Humans aren’t the only species that farms, they’re not even the first.

Our night safari guide was less wowed by the leafcutter ants than we were. He’d lived in or near the jungle all his life, after all. But my boyfriend and I had seen the industrious insects in a nature documentary, so they were like celebrities to us. With the flashlight blazing, we enthusiastically snapped paparazzi photographs of them as they went about their foraging. The parade of ants stretched as far as the light’s beam and continued into the darkness, with each worker carrying a tall sheet of freshly-cut foliage many times its own size. Just like on PBS!

What is remarkable about leafcutter ants – species belonging to the genera Atta and Acromyrmex found in the tropical regions of the Americas – is not just that they can transport such a volume of material, but their reason for doing so. Unable to digest the cellulose in the leaves, they can’t eat them. What looks like simple hunting and gathering behavior is actually farming. The leafcutters haul the plants back to their nest where they are used to maintain the growing fungus that serves as the ants’ sustenance. The level of cooperation needed to do this is itself enormous. Leafcutter ants are one of the most complex civilizations on the planet. No wonder these tiny insects – leafcutters and their ancestors – beat our own species to the invention of agriculture by tens of millions of years.

Making of a matriarchy 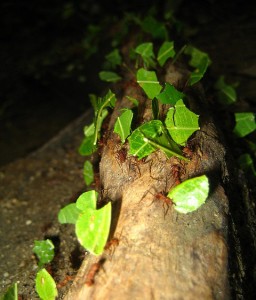 Most leafcutters seen in the wild are females. Image Credit: Micah & Erin.

As with other types of ants, the leafcutter colony is something of a girls’ club, founded by a female queen and maintained by her female children. While most of the queen’s offspring grow into sterile female workers, in a mature colony she also produces a small amount of reproductive females and a matching quantity of males yearly. Unlike the workers, the breeders have wings, and, one fine day, the winged ants leave the nest to take part in a nuptial flight. Flying females mate with several males and collect sperm from each. The males, fragile by design, are needed only for this contribution and die soon after their couplings. But their sperm lives on, stored by the female and used to fertilize a lifetime (about a decade, if things work out) of eggs.* It seems ants beat humans to concept of sperm banking as well.

After their gamete gathering foray, female leafcutter ants discard their wings, burrow into the ground, and get to work on establishing their colony. It’s rough going in the beginning, the queen must both lay eggs and establish a fungal garden to feed her young. She sustains herself during this period by eating many of the eggs she lays (hey, they’re plentiful and available, you’d do it too) and metabolizing the muscle that had powered her discarded wings. Once the colony is up and running, she can forgo the other chores and focus on laying eggs. Lots of eggs. A queen can lay over 25,000 eggs per day. The sterile workers lay eggs too, unfertilized non-viable ones that are fed to their queen. Life in the nest is one of egg-centricity.

Green thumbs without fingers
As somebody whose lackluster gardening skills have killed organisms as purportedly low-maintenance as cacti, I can appreciate the difficulties posed by large-scale agriculture. Farming isn’t easy, and a leafcutter colony’s success is far from assured (the survival rate of newly-founded colonies can be as low as 2.5% in some species). Each species of leafcutter ant specializes in a particular fungus (all from the Lepiotaceae family) and must avoid contaminating their crop with competing fungi. An aspiring queen brings a chunk of starter fungus from her original nest when taking off to mate. This will be the foundation of her garden empire.

The ant-fungus interaction confers benefits to both organisms. The fungus, which has enzymes needed to digest the cellulose in the plants the ants collect, gets food delivered right to its door. Meanwhile the ants get a constant supply of edible fungus out of what, to them, would otherwise be inedible leaves. † 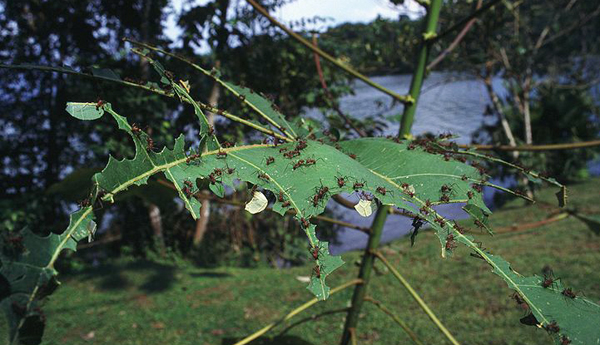 Despite their name, leafcutters collect more than just leaves; stalks and flowers are also carried back and offered to the fungus. The ants pay close attention to how well the materials go over. If a particular plant is toxic to the fungus, the stress is communicated (possibly chemically) from fungus to workers and the offending item is removed from the menu. Like many human farmers, leafcutter ants diligently fertilize their garden with manure. For ants, however, the source of the manure is their own feces, which conveniently retains the digestive enzymes of the their particular fungus and is incompatible with other strains.

The gardens require high humidity and temperature to thrive, but must be free of pathogenic microorganisms and competing fungal strains, which also fare well in such an environment. The workers carefully prune any outside strains of fungus from their garden and secrete antibiotic compounds to keep the germs at bay (antibiotics, hmm, sounds like human farming again). They also need to be ready to defend their nest against other ants of the same species (if leafcutters have the misfortune of losing their garden they may try to misappropriate someone else’s.) Oh, and don’t forget about monitoring CO2 levels; these can get dangerously high when the nest is closed off to prevent flooding during rains. One can see why the farming life isn’t for everyone. 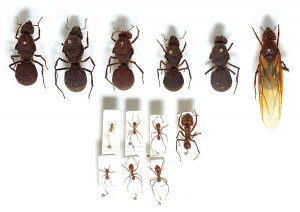 With so much work to be done, it makes sense to have specialized roles. Jobs performed by leafcutter ants are determined largely by the insects’ proportions. The size-based castes go from mimims to minors to mediae and finally to majors. Larger ants, with larger cutting mandibles, are frequently tasked with slicing off plant material, while smaller ants are more likely to transport the fragments back to the nest. (With longer foraging routes, carrying of leaves is split into relays.) Still smaller ants break down the fragments and distribute them to the fungal garden. But even the smallest ants can aid in foliage collecting. Tiny mimims have been observed riding back to the nest on leaves carried by the larger workers. The function of the tagalong may be to protect the larger ants from aerial attacks by the parasitic phorid fly, but may also allow them to clean the leaves before bringing them into the nest. 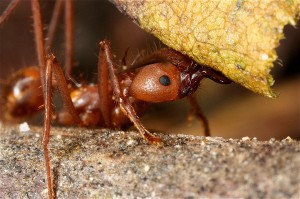 Work assignments can also change with age. Older ants in the foraging department may switch jobs as their mandibles wear down. Younger ants are more likely to be given nest duties, such as tending to the queen and her latest brood. One exception to this is the management of the nest’s waste, which is removed to special storage chambers or, in one species, just dumped outside the nest altogether. Waste materials are hazardous enough that the job of handling them is foisted on the oldest ants – the most expendable members of the colony. ‡

The benefits of teamwork 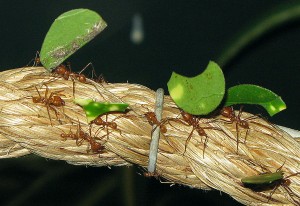 Bringing home the bacon, so to speak. Image Credit: Arpingstone

Leafcutter ants’ existence is so dependant on cooperation and coordination that it might be more accurate to refer to the entire colony as the lifeform, rather than the individuals. While not the only insects to cultivate fungus (some other ants and termites manage similar, yet much simpler, operations) leafcutters are they only ones to do so by harvesting large quantities of vegetation. Many animals that consume plants directly don’t devour as much green matter as these guys. Leafcutter ants can strip a tree in just 24 hours. They mean business.

And, no, competitive humans, leafcutter ants haven’t found a way to grow genetically modified super-fungus, nor have they stumbled upon pasteurization, homogenization or anything akin to the cotton gin. But cut them some slack, okay. They’re ants.

* Sperm is used only to produce females. Males hatch from unfertilized eggs. Their haploid (made from one gamete rather than two) genetic composition contributes to their short lifespan.

† Adult leafcutters can also eat plant sap, but the larvae rely on fungus as their sole food source.

‡ Leafcutter ants have such an aversion to the waste that it can allegedly be used as repellent to keep them from defoliating crops.