Lifeform of the week: Horseshoe crab

If the horseshoe crab looks like it comes from another era, that’s because it does.

The first time I became aware of horseshoe crabs was during a trip to Montauk – the eastern tip of New York’s Long Island. Walking along the beach, I saw the discarded shell of a most unfamiliar creature. It was much larger than normal sea critter debris, probably comparable to a salad serving bowl. Obviously it had either 1) fallen from an alien spacecraft or 2) been shot out of an oceanic wormhole that connected to a prehistoric time when all animals were bigger and weirder-looking. As I continued to walk, I encountered more of these shells and was forced to revise my original hypothesis: radiation creating mutant super-crustaceans perhaps?

It took minimal description and “this big” gesturing for locals to answer queries about what I’d seen. These were the shells of the Atlantic horseshoe crab, and if the animal looks like it comes from another era, that’s because it does. Among the earliest complex organisms, it has survived changes to the planet that killed off countless other creatures.

But the future is less certain, as their population has been decreasing in recent decades. Strangely, this animal’s survival is both threatened and protected by its ability to provide resources to several other lifeforms, including our own species.

Horseshoe crabs are ancient. Evolving between 250 and 550 million years ago during the Paleozoic Era, they predate mammals, flowering plants and even dinosaurs. Close cousins the trilobites, who did pretty well through most of the era, finally expired during a mass extinction at its close. But horseshoe crabs managed to survive. 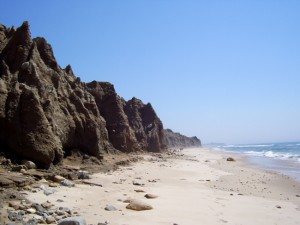 Today, four species remain: the Atlantic horseshoe crab (Limulus polyphemus) – found along the eastern coast of North and Central America – as well as three species inhabiting the Indo-Pacific region. Some of the largest concentrations of Atlantic horseshoe crabs are centered around Delaware Bay, whose sandy coves provide optimal spawning grounds.

Though named crabs, presumably for their crustacean-like appearance and aquatic lifestyle, they are more closely related to spiders and scorpions.

Not your average arthropod 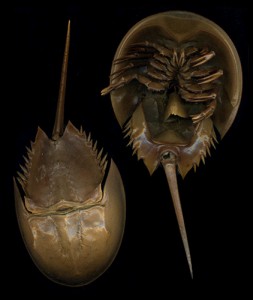 The Atlantic horseshoe crab looks its age. Its body is covered by a hard exoskeleton. Once fully formed, this armor is impenetrable to most would-be predators (sharks and sea turtles being notable exceptions.) Horseshoe crabs shed their shells and form new ones as their bodies grow. Young crabs molt several times before even hatching out of their eggs.

They have an absurd number of eyes for such a large creature: more than ten, including clusters of photoreceptors found on the tail. (Curiously, their species name comes from the mythical one-eyed giant Polyphemus.) So much light-sensing equipment is necessary because horseshoe crabs mate in accordance with lunar cycles and must be able to spot changes in the moon’s illumination.

The spike-like tail, which some people wrongly assume is a stinger or some other dangerous weapon, is totally harmless. The crabs use these to steer and to turn themselves over if crashing waves along the sea shore flip them onto their backs.* 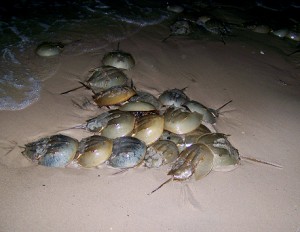 Atlantic horseshoe crabs spend much of their lives on the ocean floor. But when it’s time to spawn, they head for the beach like a bunch of college students on spring break. The timing varies by location, but the peak is generally somewhere between late May and early June. Droves of crabs emerge from the surf at high tide during full and new moons to get it on (by means of external fertilization). Females, which are larger than males, dig into the wet sand and deposit their eggs while attending males eagerly wait to contribute their gametes to the event.† Males outnumber females, and a single batch of eggs may be fertilized by as many as five or six males. Females lay four to five clutches of eggs at each tide, containing several thousand eggs. Only a fraction of these reproductive efforts will survive to adulthood.

For those eggs that do mature into adult crabs, the process involves about ten years of growth and molting after hatching.

Horseshoe crab blood lends them even more of an alien appearance. Because it transports oxygen using copper-based hemocyanin (rather than the iron-based hemoglobin we are more familiar with), the fluid is blue. Not only is the crabs’ blood cool-looking, it is currently the fastest and most effective method for assuring that IV medications and vaccines are free of endotoxins.‡ A component of the blood – amebocytes – forms clots if it comes into contact with endotoxins. After receiving FDA approval in the 1970s, Limulus amebocyte lysate (LAL) became the standard method for testing any injectable medical products. To obtain this valuable substance, horseshoe crabs are collected and bled in a laboratory. The idea is to extract an involuntary blood donation without actually killing the animals, but unfortunately not all the crabs survive this procedure (mortality is estimated to be as high as 10 to 15 percent).

Having your blood forcibly drained in a lab may sound bad enough, but horseshoe crabs have even bigger problems. Unfortunately for them, it turns out they also make excellent bait for certain kinds of fishing. Eels and conchs find the horseshoes irresistible, making them the preferred bait for fisherman, and unrestricted commercial harvesting during the 1980s and 1990s led to a substantial reduction in the crab population. 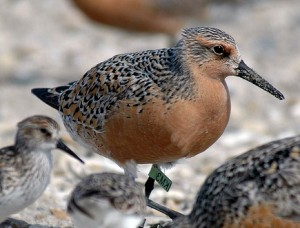 Since this pattern was established, several east coast states have experimented with legislation aimed at reducing the harvesting of horseshoe crabs. Such measures include restricting the taking of crabs until after the height of spawning season, prohibiting the taking of female crabs, and outright bans on horseshoe crab harvesting in some states. While potentially good for red knots, this has also driven up the price of bait for those who make their living catching eels and conchs.

Technology to the rescue 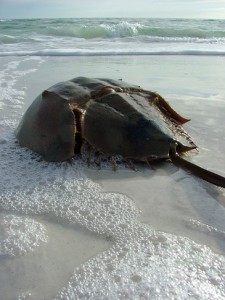 Science is working on ways to keep both fisherman and birds in business. Artificial bait is already in the works, and a much simpler mechanism, bait bags (which prevent other fish from swiping bait intended for eels and conchs) have reduced the amount of bait necessary for fishermen to make successful catches.

And there’s even hope for a crab-free way to test for endotoxins. In 2011, the National Science Foundation (NSF) announced that researchers found a way to test for these bacteria using liquid crystals – the material employed in making some computer monitors and flat screen TVs. The crystals flow like a liquid but can form crystallized molecular structures similar to that of a solid when they run into certain contaminants. Conveniently, they are sensitive to endotoxins, and the structural changes they undergo upon meeting these bacteria alter their optical properties, i.e. they look different once you add endotoxins. The crystals are purportedly more sensitive to endotoxins than old-fashioned horseshoe crab blood and significantly cheaper (one quart of blue blood runs about $15,000). Before you get too excited, recall that the march of progress can be a slow one, especially when human health is at stake. It may be years before liquid crystals can be rolled out as the new LAL. Let’s hope we don’t run out of horseshoe crabs before then or it’s back to rabbits. 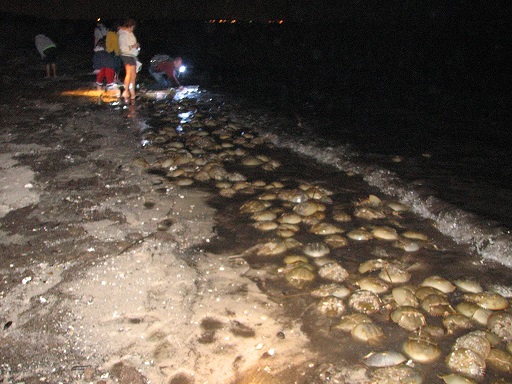 Our friend Joe Perchetti sent us this photo. He wrote, “My mother is the Volunteer Coordinator at the Edwin B. Forsythe Wildlife Refuge in Absecon, New Jersey.  Our family supports the many of their programming.  Every spring, we conduct horse shoe crab surveys under the full moon with their Marine Biologists.  Absolutely amazing experience.” This photo was taken in May 2010, Delaware River, Reed’s Beach, New Jersey.

* This happens fairly often and, even with the aid of their tails, they can’t always get back on their feet and may become stranded and die. You can save them by simply flipping them back over if you see them on their backs flailing their legs in the air. Flip from the shell, though, not the tail (it’s delicate).

† Horseshoe crab males are literally clingy. “Attending” often means hanging on to the female by means of a special grasping adaptation on one of the legs.

‡ Endotoxins are a kind of poisonous bacteria that aren’t killed by heat sterilization and can cause fevers and even fatalities if they enter the human bloodstream. Previous testing technology required the use of live rabbits and was slow-going.