Lifeform of the week: Hoatzin

Physiologically and evolutionarily, the hoatzin is a fascinating bird. Just hold your nose when you’re near it.

If you could be any animal in the world, what animal would you be and why? Perhaps a strong, commanding lion? It’s the king of the jungle. Or maybe a dolphin? They’re smart and social and they get to spend the whole day swimming. Or how about a bizarre tropical South American bird that can’t fly very well and smells like cow manure? No? What if I tell you that its physical characteristics make it unique among birds and that its enigmatic origins continue to baffle and fascinate scientists?

Why not put aside those conventionally popular animals for once and align yourself instead with zoological individuality? Next time you encounter that trite animal question on a speed date or at a job interview (apparently, it’s not unprecedented) stand your ground and answer, “I would be a hoatzin, because they’re freakin’ cool.” 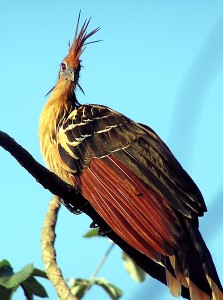 I’m not going to lie to you; the hoatzin is sometimes called the “stinkbird” and, by all accounts, it does stink. Undesirable odors are hardly uncommon in the animal kingdom, but what lends the hoatzin its characteristic stench is quite remarkable. The species digest their food with the aid of “foregut fermentation,” which is otherwise unheard of in birds. The foregut is, as it sounds, the first portion of the digestive system, in this species the esophagus and the crop.* Hoatzins eat primarily leaves, whose tough cellulose walls are a challenge to digest. But these birds have special enlarged crops that house bacteria capable of breaking down the leaves through fermentation. If that sounds familiar, it’s because that’s how cows (and other ruminants) digest their food. Hoatzins smell like a herd of cows because they eat like a herd of cows. And it’s working out well for them. Foregut fermentation allows animals to get valuable calories from what would otherwise be mostly fiber, and yet the hoatzin is the only bird to have such an adaptation.

There are some downsides to foregut fermentation, and it’s not just being called “stinkbird” behind your back. Because the crop of a hoatzin is larger than usual for birds, the sternum must be smaller. A smaller sternum means less room for flight muscle attachment, and less flight muscle makes for difficult flying. Hoatzins are poor, clumsy flyers, especially in their early days. Hoatzin chicks are incapable of flight until 60 to 70 days after they are born. That’s a long time to be vulnerable to predators. Luckily young hoatzins are equipped with claws on their wings, which they can use to climb branches. Hoatzins nest near water, so in particularly desperate chases, the chicks can jump into the water below, swim for a bit (they’re much better swimmers than flyers) and then climb their way back to the nest with those handy wing claws. The claws are lost as the birds mature, by which time they can muddle through well enough in the air. 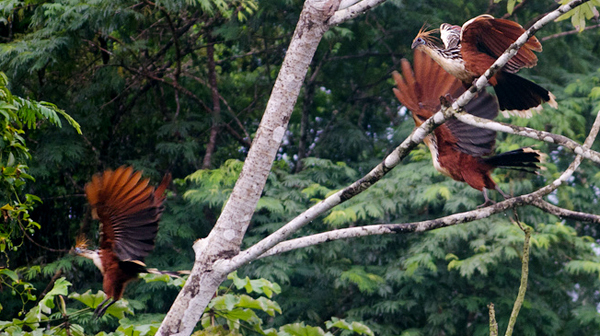 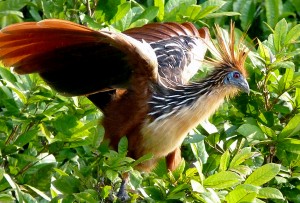 The advantage of reeking of manure is that no human wants to eat you. Despite being large, slow and easy to catch, hoatzins are rarely hunted as they have a reputation for tasting as bad as they smell. While being so un-coveted as food offers the birds some protection from our species, they’re still subject to the same habitat destruction that plagues many wild animals on our increasingly modernized planet. Their preference for waterfront nesting makes hoatzins’ living options are somewhat limited. Due to the scarcity of ideal abodes, young hoatzins may live with their parents for a few years. 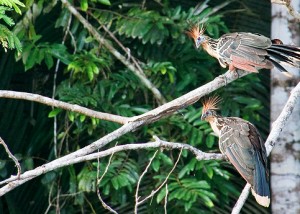 The first scientific description of the hoatzin appeared in 1776. Since then scientists have struggled to classify the birds and often argued over their origins. Hoatzins have been associated with game birds, cuckoos, and African turacos, to name a few. But none of the proposed links were particularly sound. While researchers continue to work at figuring out how such a strange bird evolved, the hoatzin occupies its own genus and family, waiting to be assigned closer relatives. The latest team to tackle the stinkbird mystery concluded that the birds’ ancestors did reside in Africa. This is intriguing information, since extant hoatzins are found only in South America. How does a bird that can barely fly cross the ocean? Most likely during a “rafting” event, in which animals get swept out to sea on a chunk of vegetation large enough to survive an accidental oceanic journey. I know, it sounds ridiculous at first, but you get used to the idea.

Rafting events have been proposed for the dispersal of rodents, lizards and even mammals.† However, if hoatzins made their way from Africa to South America via raft, this would make them the first bird known to travel this manner. Hardly shocking, as the hoatzin has never been one to behave like the average bird.

* Birds don’t chew their food like we humans. To compensate for their lack of teeth, many of them have two features in addition to stomachs – the crop (which softens food) and the gizzard (which grinds food into smaller pieces).

† Lifeform of the Week alumni the lemurs apparently made it from Africa to Madagascar by rafting.

Coyotes roll with the punches

Cranberries at their bitter best

Woodpeckers use their heads