In 2007, the ghost pepper was determined to be the hottest naturally-occurring pepper on Earth. 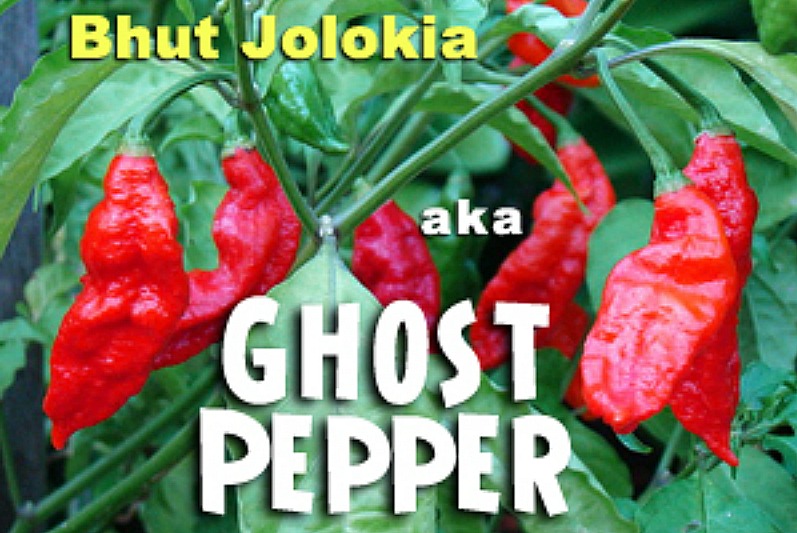 In 2007, North India’s Bhut Jolokia – or ghost pepper – became the first pepper to break the 1 million mark on the Scoville scale for spicy heat, earning the title of World’s Hottest Pepper in the Guinness Book of World Records and launching it into salsa superstardom. What’s the Scoville scale, you say? Allow me to explain … 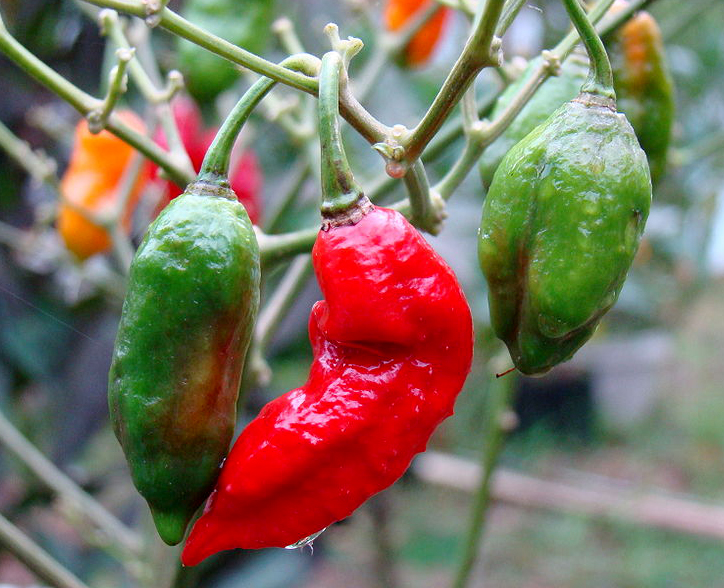 Created by Wilbur Scoville in 1912, the scale that bears his name is still in use today. Despite the existence of more precise technology, a pepper’s piquancy is frequently reported in Scoville Heat Units (SHU).* Peppers get their heat from chemicals called capsaicins, which are soluble in alcohol. Using Scoville’s system, pepper measurements are taken by soaking the peppers in alcohol to create a solution, and then adding this solution incrementally to sweetened water. The diluted extracts are given to a panel of human tasters until they can just detect the spice. The SHU number indicates the proportion of water to pepper extract. The higher the SHU, the hotter the pepper. For example, an ordinary bell pepper scores a zero, while the slightly-spicy poblano† (they’re good in a salad) has 500-2000 SHU, and the Red Salina habenero – which held the record for hotness for over a decade – has an SHU of somewhere between 300,000 and 570,000.

And the Winner Is …

The ghost pepper had been haunting India long before it became an international celebrity. Sometimes also called Naga Jolokia, it is a naturally occurring hybrid of two pepper species – Capsicum chinense and Capsicum frutescens. The pepper is found in several states in the northeastern corner of India, where it was farmed and consumed by locals before the Guinness title gave it potential as an export. Ghost peppers belong to the same genus as the completely spiceless bell pepper and, like all peppers (except black pepper, which is an entirely different kind of plant), are part of the nightshade family. Just as the bell pepper does, ghost peppers start out green and then mature to an orange or red shade. But they have a much thinner skin, an elongated shape and a notably crinkly exterior.

How hot is it?

A pepper’s heat can be affected by growth environment, so not every Bhut Jolokia scores the same on the Scoville scale. Its upper limit is given as 1,041,427 SHU. For purposes of comparison, I can offer that the average jalapeño rates 2,500-8,000 SHU, whereas law enforcement grade pepper spray rates about 5 million. This means the ghost pepper is 125-400 times as hot as a jalapeño, while the pepper spray cops use to disperse crowds is only 5 times hotter than a ghost pepper. That is, ghost peppers are more similar to pepper spray than to jalapeños.‡

But does this really matter? Generally one encounters peppers in some sort of dilution anyway, like chili or salsa. The jar of self-proclaimed “scary hot” ghost pepper salsa in my refrigerator only lists ghost peppers as its ninth ingredient. The first three ingredients: tomatoes, water, and jalapeño peppers. It tastes fine by store-bought salsa standards, but I’m guessing a similar effect could have been achieved just by adding more jalapeños. Perhaps the real benefit of high-SHU peppers is that they give food manufacturers a better language with which to express how hot they intend to make their product. Naming the stuff “Ghost Pepper Salsa” is a way of saying, “You won’t need to add hot sauce to this salsa like you usually do.”

As with tall buildings and marathon running times, spicy peppers inspire rampant one-upmanship among humans. Since the ghost pepper’s victory, three other peppers have managed to top the 1 million milestone. However, unlike the naturally occurring Bhut Jolokia, these supernaturally spicy fruits were specifically cultivated for maximum hotness.

It took a few years of creative botany, but 2011 yielded a number of mouth-scorching competitors. The English-bred Infinity Chili held the title of world’s hottest for a brief few weeks before being dethroned by another British spice monster – the Naga Viper pepper. Using the classic formula that hot + hot + hot = Hot, Hot, HOT!!, the Viper was created by hybridizing a ghost pepper with 2 other notoriously hot peppers. It boasts an SHU of about 1.38 million and is the reigning Guinness champion. Similar to curious manmade hybrids in the animal world – such as the liger, the zorse, and even the humble mule – this spicy pepper is unstable and can’t properly reproduce without the assistance of its cultivators. And the Viper’s fame may be short-lived, as recent tests have turned up a blistering 1.46 SHU rating for the Trinidad Scorpion Butch T pepper. This latest pepper has yet to receive the Guinness title, and will surely be ousted by another even hotter plant shortly after it is crowned. In the future, every pepper will be famous for 15 minutes.

While in the west, ghost peppers have recently become a popular way of spicing up meals, they are sometimes consumed raw in India for their purported health benefits – battling stomach aches and the discomfort of hot weather (I know, it sounds counterintuitive, but it has something to do with cooling the body via more sweating).

Not a fan of spicy salsa. Image via John Spooner/Flickr

There has also been talk of using the peppers to prevent attacks and property destruction by wild elephants. With the exception of our own species, most mammals don’t care for the sting of capsaicin. In fact, it is believed that the presence of the chemical in pepper species acts as a defense against being eaten. Unfortunately for ghost peppers and their ilk, this tactic just made them more desirable to spice-loving humans.

* High-pressure liquid chromatography (HPLC) is the fancy scientific method. It measures capsaicin levels in American Spice Trade Association (ASTA) units. However, since humanity is resistant to change, these are generally converted into good old fashioned SHUs.

† Tangent alert: Did you know that dried versions of peppers sometimes have completely different names? It’s true. The ancho is just a dried poblano, and the chipotle is a smoke-dried jalapeño.

‡ Please note that I am in no way suggesting that you should apply pepper spray to tacos. I encourage you to stick to traditional condiments.

Bottom line: The world’s hottest pepper is the Bhut Jolokia – or ghost pepper.