Lifeform of the Week: Eels, cuter than you think?

Let go of your aversion to slimy animals and embrace the eel appeal.

Poor eels, they have such lousy PR. Adjectives like slippery, slimy, and wriggling frequently accompany their mention. An untrustworthy person is idiomatically described as being “slippery as an eel”, as though fish would ever embezzle company money or sell you a defective used car. With their snake-like bodies, menacing jaws and sinister habit a greeting aquarium visitors by opening and closing their mouths, eels freak out a large percentage of the human population. The only time society seems to be excited about eels is when they’re on the menu, which – according to Greenpeace – is not exactly the best place for them to be. But if you look closer at these creatures (closer… closer… they can’t bite you through the glass) you’ll find they have endearing qualities too. Perhaps “cute” isn’t the right word, maybe we’re looking for something more along the lines of “striking” or “interesting” or “has a nice personality”. Whatever, eels are fascinating beasts, so have a good look.

Slimy on the outside
Despite their snaky appearance, eels are in fact fish. They’re just fish that happen to be long in shape and low on fins, with minuscule or nonexistent scales. Eels reputation for sliminess is not unwarranted, as glands in their skin do secrete a protective slime coat. But the same is true of other species of fish. In my days working in a fish laboratory, we periodically had to dose the tanks with a product I dubbed “fish lotion” designed to help the fish maintain healthy slime coats in their captive environment. The slipperiness of eels may be more a matter of their cylindrical bodies offering little to grab onto. Being slimy isn’t the worst thing in the world. In wet conditions, eels can crawl over patches of land to get to the next body of water, a handy skill when navigating through shallow streams. 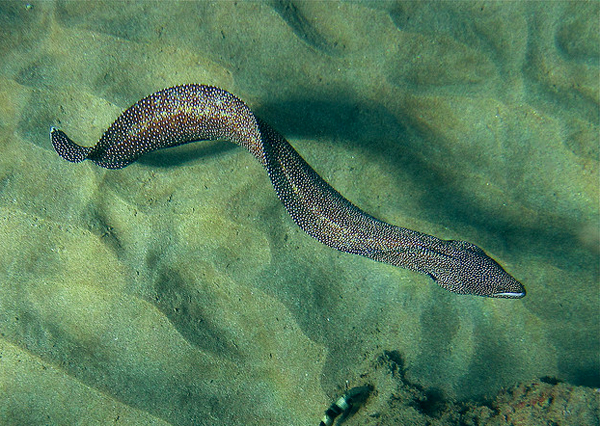 There are hundreds of species of eel out there, and they vary considerably in size from tiny (about two inches) to gargantuan (over ten feet). Their jaws vary too, from the one-jawed eels on the genus Monognathus (lower jaw only) to the mighty moray, which has a projectable second set of jaws located in its throat to help it get food down. Maybe you didn’t want to know that. But at least that creepy mouth-opening thing they do is just for breathing purposes, they’re not fantasizing about chewing your leg off. Probably.

Eels can be found in both marine and freshwater environments. But even freshwater eels (genus Anguilla) begin and end their lives in the sea. It’s a long and amazing life cycle… 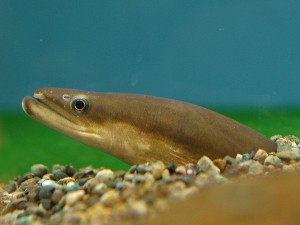 Freshwater eels are found in rivers and lakes around the world. Seeing them only in these bodies of water, you’d think the animals were airdropped in as adults. This is because the youngest eels are still in the ocean.

Anguilla eels spawn and lay their eggs at sea. Eggs drift on ocean currents as they mature into larvae. Nearer to the coast, the young morph into transparent “glass eels”, and upon entering estuaries and rivers, they graduate to title of “elver”.

After picking up a bit more pigment they become “yellow eels”. This is the longest phase of the lifecycle, sometimes spanning several decades, but it is still a growth phase. The eels aren’t fully mature yet. Finally the fish enter the last chapter of their lives as sexually mature “silver eels” (thus named for the metallic tone their skin takes on at this stage) and make their way back to sea to mate. The ocean is the end of the road, and the eels likely die there after they reproduce. 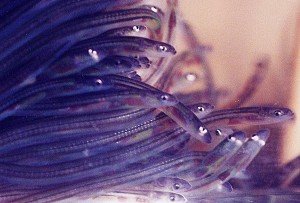 The Sargasso sea is a hotspot of freshwater eel spawning, with both the European eels (Anguilla anguilla) and American eels (Anguilla rostrata) hosting their meet-and-mate gatherings in its waters, the resulting eggs then drifting toward their respective continents. Some young eels migrate far inland before their eventual return to sea, others prefer to spend their yellow years closer to the coastline.

Eels’ meals
Carnivorous and flexible, eels consume a variety of animals found in the water or on its surface – fish, crustaceans, insects and larvae to name a few. Larger eels take on larger prey, so diet varies with both age and species.

This may not sound like their best selling point, but some species of eel will also partake of dead animals. That’s actually a good trait as it helps keep the underwater rotting carcass volume in check. Think of them as the vultures of the sea. 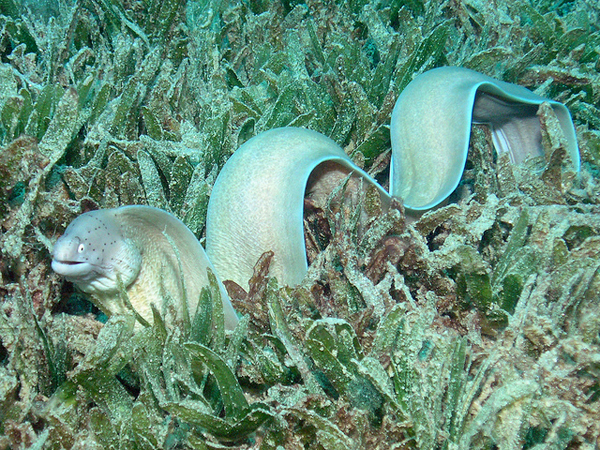 Eels are generally nocturnal, doing most of their hunting at night. Not just vicious predators, the can also be impressively cooperative, uh… predators. One species of eel – the giant moray eel (Gymnothorax javanicus) has been observed hunting alongside a completely different fish, the grouper (Plectropomus pessuliferus). It’s a heartwarmingly genial affair. When they wish to extend a hunting invitation, the groupers signal to the eels with a shake of the head, and the eels cordially accept. Tackling different terrain as hunters (groupers cover the open water, eels the tight nooks), both species increase their chances of catching prey through this collaboration.*

Meals with eels
You may want to sit down before I tell you this – the dragon roll at your favorite sushi place is not made out of real dragons. The meat part of this roll comes from freshwater eels, called “unagi” in Japanese. † The three most popular species used for unagi are the Japanese eel (Anguilla japonica), the European eel and the American eel. They’re perhaps a bit too popular, as their wild populations are in decline, and all three species have made the Greenpeace “Red List” of seafood to avoid eating due to non-sustainable fishing methods.

Part of the problem is that freshwater eels are long-lived and only reproduce once. Additionally, even farmed eels are not necessarily bred in captivity. Those elver eels that turn up (at conveniently predictable times of year) in coastal areas are also caught and transported to aquaculture facilities where they are raised to adult size, which cancels out any purported conservation advantage to farm raising. 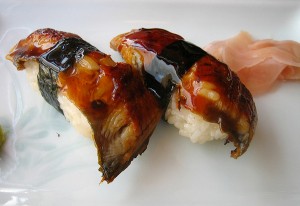 Because of the environmental pressures on the American eel, only two U.S. states – Maine and South Carolina – currently allow elver fishing, and with heavy restrictions. Maine’s season just ended, running only the week of March 22 to March 31.  According to the New York Times, it was a profitable one, with the tiny fish selling for about $2000 a pound.

While we’re on the subject of the pros and cons (well, mostly cons) of eel cuisine, I should also mention that eel blood is apparently something of a poison to humans. According to varying and not always consistent accounts, the blood is either horribly toxic, sort of toxic, or somewhere in between. Still, you might want to proceed with caution on that one. Cooking is the easiest way to avoid any problems. ‡ Unagi is typically grilled, making it a favored option for sushi diners who aren’t comfortable eating raw fish but are weary of cucumber rolls. 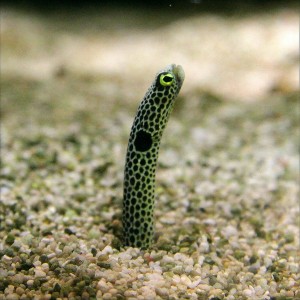 In case, despite all the pretty pictures, you still aren’t sold on eels’ aesthetic virtues, I invite you to gaze in wonderment at the disarmingly adorable garden eel (subfamily Heterocongrinae). These teeny guys live in groups, burrowing into the ocean floor and then poking their little heads out of the sand like blooming plants. Just say it already. Awww.

* The team hunting is done on grouper time (during the day), but nocturnal morays seem to be good sports about being dragged out of bed early.

† Marine eels like congers are also used in food, the term for this item is “anago”.

‡ Another con, if you’re thinking of preparing fresh-caught eel at home, is the aforementioned slipperiness. Experienced cooks recommend nailing the animal to a board before attempting to skin it. Shudder.