Say hello to the death’s-head hawkmoth

It’s the insect star of The Silence of the Lambs. 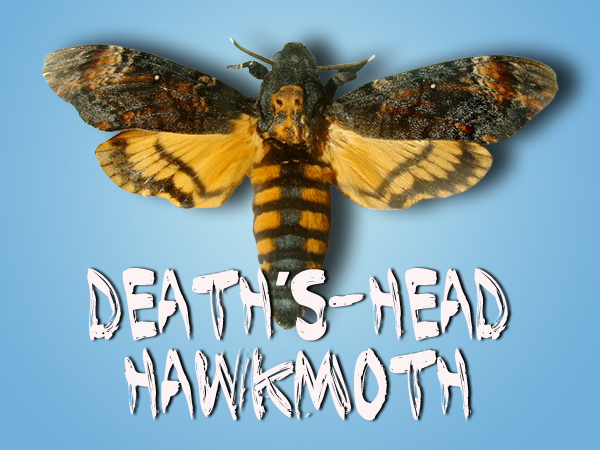 Have you seen The Silence of the Lambs? It’s one of my favorite films. I encountered it during my impressionable teen years, and it made a meteoric crater of an impression. So many tense, terrific scenes… Remember how Buffalo Bill lures his victim into the back of the van by pretending to have a broken arm? Or what about Hannibal Lecter’s daring escape from his courthouse jail cell? And the night-vision goggle showdown in Buffalo Bill’s basement-cum-dungeon? And while we’re on the subject, didn’t Buffalo Bill have an awesome record collection for a movie serial killer? Fine, you may not have noticed the brilliant soundtrack, but surely you recall Bill’s passion for insect collecting…

The death’s-head hawkmoth, which figures into the plot and is prominently featured in the movie poster, is no invention of fiction.* While the movie poster bears an exaggerated Photoshopped image of the insect, the real death’s-head moth is, in fact, so named for the striking skull-like pattern on its thorax. The moths have been spooking people for centuries with this ghoulish getup (they’re also mentioned in Stoker’s Dracula), but their behavior is stranger still.

But first, a few basics 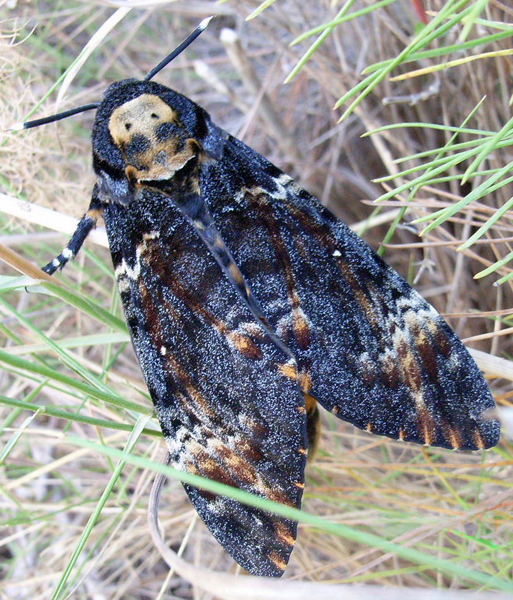 Looks rather like a cloaked skeleton, no? Image via Siga

Three different insects answer to the name death’s-head hawkmoth – Acherontia atropos, Acherontia styx and Acherontia lachesis, so let’s try to keep them straight. Though all three are of the same genus and bear the tell-tale skull on their backs, their distribution differs. Unless otherwise noted, I will be discussing the more well-studied A. atropos  species.† While the other two are found in Asia, A. atropos occurs in Africa and parts of Europe. Some turn up as far north as the UK, but they generally winter in warmer regions, as the pupae can’t survive a good freeze. The death’s-head moth is a hefty beast (A. styxis the smallest of the three) with a wingspan as wide as 13 cm (over 5 inches). It shares with most (though not all) other moths a nocturnal lifestyle. And there the behavioral similarities end and the quirks begin.

A life of crime

Many adult moths sustain themselves by drinking flower nectar, but death’s-head moths prefer to supplement their diet by plundering honey from beehives. As you can imagine, this is a tricky heist to pull off, but the moths have several adaptations to prevent the job from going awry. A thick cuticle covers the body, making it harder for stingers to penetrate, and the moths may have a partial resistance to bee venom. Clawed feet enable them to climb around the hive with ease, and their short proboscis is the ideal utensil for piercing honeycomb. 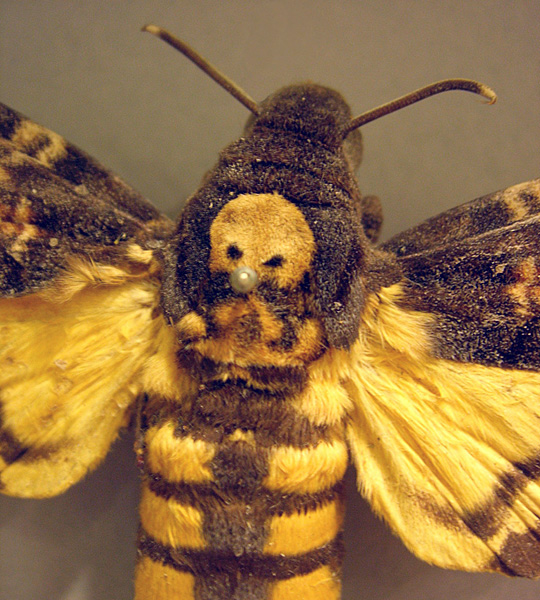 This one seems to have sprouted a taxidermist’s pin from its skull spot, but you get the idea. Image via Vassil.

But perhaps the most important tool is chemical rather than physical. Inside the hive, bees rely on scent to identify their fellows, and the death’s-head moth has been shown to disguise itself by chemically mimicking the smell of bees (A. atropos specializes in robbing a particular species of bee, Apis mellifera). As a result, they encounter little resistance once they make their way past the outside guards. In the past, the death’s-head moth was sometimes called the “bee tiger”, thanks to its bullying of the industrious insect.

Silence of the moths

When I mentioned my latest lifeform article to my boyfriend, he commented that the back door of our house currently “looks like the entrance to Buffalo Bill’s arts and crafts room.” It’s true. It’s moth-mania out there, fueled, no doubt, by our absurdly bright outdoor security light. Designed to deter burglars, it at least succeeds at attracting moths. But amidst the insect frenzy, all I hear when entering the house past sunset is the fluttering of wings. Ours are just ordinary moths. They’re quiet. The death’s-head moth, however, is a yelper.

The sound of the death’s-head moth is described as a loud, high-pitched squeak. They achieve the noise by expelling air from their proboscis (the part that looks like a long nose), past a flap near the opening called the epipharynx. They make the sound when startled, but they also do quite a lot of squeaking when conducting their honey raids. One might expect thieves to be as silent as possible – less squeaking, more sneaking – and some scientists have noted that the noise is not unlike a sound used by queen bees to control their workers (specifically to make them stop moving). Could this be a clever tactic by the moths not just to avoid detection, but to control the would-be defenders of the hive? That would be a convenient explanation, wouldn’t it, but the effect has yet to be demonstrated. 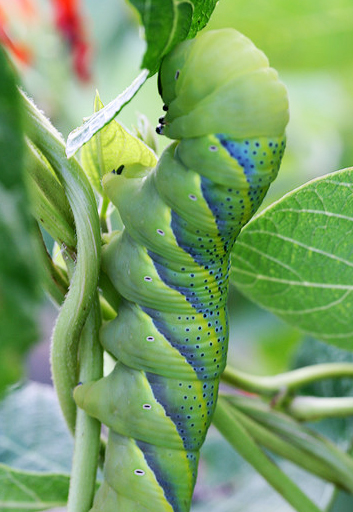 See what I mean? So stylish. Image via MarilynJane.

In The Silence of the Lambs, Buffalo Bill presumably plants the death’s-head pupae in his victims to represent transformation – ultimately his desired transformation – from hideousness to beauty, from homely caterpillar into lovely winged, er, moth (perhaps a butterfly would have been a more fitting choice?) But the final instar‡  of the death’s-dead caterpillar is rather fetching in and of itself. Just look at that intricate blue and green patterning. Someone really should incorporate a similar design into socks or maybe neckties.

When it’s time to pupate, the brightly colored caterpillar coats itself with a saliva-esque secretion, which darkens its exterior. Then it burrows into the ground to build its pupa and make its grand costume change into a moth. 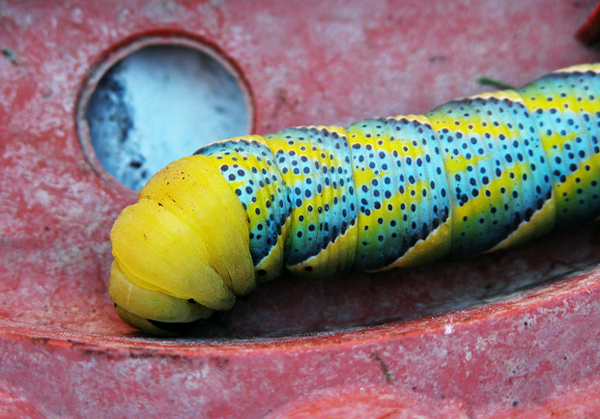 One more for good measure. Image via Marc Rey.

As with the moths, death’s-head caterpillars can be quite large, 12 to 13cm when fully grown. They eat plants at this stage, and were commonly found on potato farms before dousing the crop in chemical pesticides became the norm. When potato researchers at the University of Whales found one such critter munching on their experiments in 2003 it was novel enough to land in the BBC news. As you can see in the article, the conspicuous caterpillar was about the size of an early aughts Nokia cell phone. A comparison device sure to confuse future generations.

* Yes, I know it was a book first, but I didn’t read it, so let’s just discuss the movie version, shall we?

† While the script refers to the pupa Buffalo Bill symbolically lodges in a victim’s throat as Acherontia styx, the insect playing the role is actually of the species Acherontia atropos. That’s Hollywood for you.

‡ Instars are the different stages of the larva, which molts four times (five instars) before it is ready to pupate.