Lifeform of the week: From cacao tree to chocolate valentine

Nothing says “I love you” like roasted and pulverized cacao beans, better known as chocolate.

No sooner have the Christmas decorations been stored away than the Valentine paraphernalia emerges. Shops around the world deck themselves out in pink and red and brace for the torrential sales surge in flowers, jewelry, and, most of all, chocolate. Chocolate-dipped strawberries, chocolate-covered cherries, and heart-shaped boxes filled with heart-shaped chocolates can be found at every boutique, supermarket and roadside stand in the weeks leading up to February 14. Though it wasn’t even manufactured in solid form until the mid 19th century, chocolate has become the go-to gift for Valentine’s Day. Originally bestowed upon Maya and Aztec civilizations by the Theobroma cacao tree, chocolate would later be re-gifted to European conquerors. It’s undergone some changes since that time, but its popularity hasn’t waned a bit. 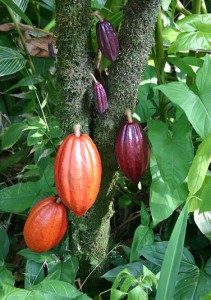 Long before it was a dessert standard throughout the world, Maya and Aztec cultures in Mesoamerica were enjoying chocolate as a beverage. Theobroma cacao, the tree from which they derived this drink, is a new world native. A short, understory tree, it grows best in humid climates, beneath the shade of taller species. A bit on the delicate side, it can’t tolerant drought or frost.

The tree produces a good deal of (not especially bouquet worthy) flowers and a much smaller quantity of fruit (perhaps 40 during a good year) in the form of pods. Both flowers and pods sprout directly from the tree’s trunk. Each pod contains between 20 and 60 seeds, or “beans” imbedded in a pulp. It’s the beans that ultimately provided society with early chocolate drinks and a variety of modern chocolate products. 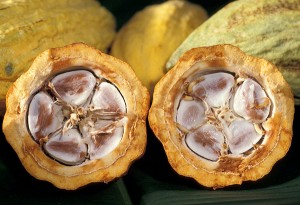 After eons of suffering through a drab, chocolate-free existence, Europe finally got wind of the novel new world drink in the 16th century, when Spanish explorers brought the treat back from their journeys. Chocolate was a hit in Spain and the trend quickly spread to the wealthier residents of other European nations. The beverage sustained the needs of the continent for a few centuries before industry advances made it possible to turn cacao beans into not just drinks but also candy.

Food of the gods*

What does it take to pound the fruit of the cacao tree into foil-wrapped confections to be purchased as amorous holiday offerings? Is it a miracle performed by Aphrodite herself? Let’s see if we can take some of the romance out of it, shall we?

Like love itself, chocolate industry terminology is often unduly confusing. Cacao beans are also called cocoa beans. Cocoa mass is also called cocoa liquor, even though neither contains alcohol.‡ The liquor, like the bean it was ground from, is roughly half fat. After the initial heating that makes paste into liquor, the fatty and low fat components can be further separated into cocoa butter (just the fat), and cocoa solids (just the lean). Cocoa solids are usually sold in the form of cocoa powder. It bears mentioning that the terminology isn’t always used correctly or consistently. (I encountered more than one candy bar using the term “cocoa solids”, when it clearly meant “cocoa mass”). Bewildered and frustrated yet? Perhaps a glossary will help…

Or how about this production flow chart… 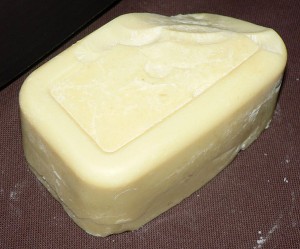 Where were we again? Oh, right… Cocoa mass, sugar and cocoa butter make up the bulk of any decent chocolate bar (we’ll get to abominations like milk chocolate shortly). Adding cocoa powder and reducing sugar can yield super, mega, extreme dark varieties. Some manufacturers have created bars with up to “99% cocoa”. Ah, but do they mean cocoa mass or cocoa solids? Judging from the nutritional label, it looks like mass. Just as well, since a bar composed of mostly cocoa powder sounds a bit, well, dry.

Is white chocolate really chocolate? What about milk chocolate?

Here’s the deal. Chocolate = cocoa mass + sugar + cocoa butter. Milk chocolate adds milk to the equation. White chocolate goes a step further and removes the cocoa mass. It still contains cocoa butter, which is derived from the beans of the cacao tree, but then so do various moisturizers, and we don’t refer to those as chocolate. But I don’t want to debate semantics. If a mixture of cocoa butter, milk and sugar wishes to be addressed as white chocolate, who am I to say otherwise?

As for milk chocolate, the credit/blame for this invention falls mostly on Swiss chocolate maker Daniel Peter. It took him several years of labor to realize his goal (milk’s watery quality was thwarting the process). Finally, toward the end of the 19th century, and with the help of Henri Nestlé, who had created an evaporated “milk flour” for use in baby food, Daniel was finally able to make the watered-down, pseudo-chocolate beloved by millions today.

You may have heard from your parents, grandparents, or some other surly old people that money doesn’t grow on trees. This wasn’t always the case. The Maya and Aztec societies that made cacao-based drinks also employed the beans as a unit of currency.

Whether or not cacao beans could buy you love back then is a matter for historians, but walking through the candy section during the month of February, the answer appears to be yes.

It was British chocolate maker Richard Cadbury who unleashed the first box of Valentine’s Day chocolates in the 1860’s. He was onto something. By the 20th century, chocolate had become an indispensable part of socially-sanctioned declarations of love.

Even those not smitten with the holiday can take heart; the days following Valentine’s Day offer fantastic deals on any chocolates whose red-ribboned and bowed presentation renders them obsolete as stores trot out the Easter decorations.

* “Theobroma” derives from Greek and translates into “food of the gods”

† The beans can also be shelled first then roasted, if you prefer.

‡ Chocolate liqueur is an unrelated product, which involves both booze and chocolate.