Lifeform of the week: Brown tree snakes, slithering pariahs of the Pacific islands

Brown tree snakes are rapidly eating their way through Guam and are poised to do the same to other islands. Can they be stopped?

The brown tree snake (BTS) is the quintessential invasive species. Since finding its way to the U.S. territory of Guam in the mid-20th Century, it has wiped out most of the island’s native bird species and continues to devour lizards and small mammals at an alarming rate. When they take a break from eating indigenous wildlife, brown tree snakes like to crawl around on power lines, leading to numerous electrical outages that disrupt business and cost the island millions of dollars annually. Why am I writing about such a terrible animal? What can I say; snakes are interesting. And it’s not like these reptiles asked to come to Guam, though they sure made themselves at home once they arrived. 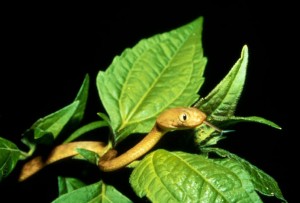 Is this innocent looking little snake really the cause of so much mayhem? Okay, fine, maybe it’s not that little. In their native range – northeast costal Australia, Papua New Guinea and parts of Melanesia – brown tree snakes grow to between 3 and 6 feet in length. However on Guam, since there was so much food available, they sometimes get a little bigger – just a little, nothing to worry about, not much more than 10 feet. The snake’s proportions do lend it a certain diminutive appearance. The slender neck supports a large head with round wide eyes – like Bambi.

This snake is not particularly venomous. Fanged snakes come in two varieties; those with hollow fangs and those with grooved fangs. Hollow fangs can inject venom like a hypodermic needle, whereas grooved fangs deliver it in a slow trickle. Brown tree snakes have the gentler, grooved version of fangs located in the very back of their mouths. In order to get any mileage out of this setup, they need to open their mouths as wide as possible and then sort of chew on their victim a bit until enough venom flows down the grooves of their fangs. For an adult human, the amount of gnawing required to do any serious damage would be far more than anyone would tolerate before swatting the reptile off. They can, however, be a threat to small children. They’re also rather aggressive if cornered, so snakebites are a not an uncommon occurrence for the residents of Guam.*

The brown tree snake is not a picky eater, and this adaptability is part of what allowed it to thrive on its new island home. They consume frogs, lizards, small mammals, birds and eggs, and will also scavenge for any other edibles that might fall their way. Adult snakes are more likely to prey on birds than are young snakes (which can happily get by on small lizards), so even after they inhaled nearly the entire bird population of Guam, the snakes are still easily able to get enough calories to reach reproductive age and, voila, more snakes! While BTS density varies throughout the island, they’re reportedly up to over 10,000 snakes per square mile in some unfortunate areas.

Recipe for an ecological fiasco

In a recently-published essay, a group of ecologists suggested that we need to stop stigmatizing as “invasive” those non-native species that don’t cause damage in their new homes. After all, some introduced species play nice with the local flora and fauna; why try to eradicate something that isn’t actually a problem? But this plea for tolerance was certainly not made on behalf of the brown tree snake. The BTS is textbook example of just how much can go wrong when species travel to foreign lands. Though harmless enough in their native range, the snakes have profoundly and negatively impacted the biodiversity of Guam.

Many tales of invasive species begin with humans’ fascination with exotic pets. People purchase enormous lizards or man-eating cats with the best of intentions, but then the animals either escape into the wild or are abandoned there after their owners discover how impractical it is to have a clawed and fanged killing machine hanging out in one’s living room. But such was not the case with the brown tree snake. Most likely the snakes got to Guam by accidentally stowing away in U.S. military cargo transported from Papua New Guinea.† 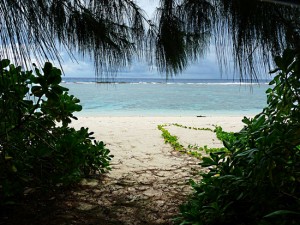 The real problem is that Guam, like a number of islands before humans became so globally mobile, was once essentially snake-free. In the pre-BTS days, the island’s only snake was the Ramphotyphlops braminus, a species of blind snake that lives underground, eats things like termite eggs and is so small that it is typically mistaken for an earthworm. Now you might think that a tropical island without snakes sounds like paradise, but there are some drawbacks. You see, the animals living in such places have spent their entire evolutionary histories without any exposure to snakes, making them easy prey for the first slithering reptile to show up. And with no native snake species to compete with, the brown tree snake had the buffet table all to itself. Population control of the BTS in its native range results from a more limited and elusive food supply. But over half a century after brown tree snakes colonized Guam, and even after they consumed most of its avian snack offerings, the island continues to provide enough rapidly multiplying lizards to keep the snakes in business.

Brown tree snakes are excellent climbers. They can lift ¾ of their body off the ground, supporting themselves on the remaining quarter. Power lines are no challenge to these reptiles, and the poles supporting them are viewed pretty much like trees – a nice place to rest during daylight hours. Ah, cozy manmade electricity trees. It the snakes cuddle up too close to the wrong wires, problems ensue ranging from power surges to limited-scale brownouts to island-wide blackouts. Snake-induced electrical mishaps occur on average about 1 every 3 days.

Can the problem be contained? 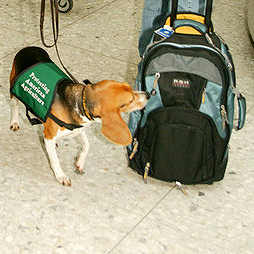 Needless to say, other islands are not eager to experience the snake invasion that Guam has had to endure. And, with its high population density on Guam and its tendency to curl up in manmade structures like boats and planes, the brown tree snake is a constant threat to anyone receiving shipments from Guam. Cargo arriving from Guam is carefully screened, and the aid of “snake-detecting dogs” is sometime enlisted. Dogs who work sniffing out other kinds of contraband can be “cross-trained” to also find reptiles stowing away in packages. But such systems don’t guarantee 100% de-snaked imports, and it isn’t always possible for dogs to search the cargo vessels. Vulnerable islands like Hawaii still spend a lot of time fretting over these snakes.

Can the problem be fixed?
The U.S. government (aided by scientific research and military strategizing) is currently trying out a novel technique for controlling the snake population; they’re airdropping dead mice stuffed with acetaminophen into the jungles of Guam. The plan is less crazy than it sounds. It turns out that acetaminophen – a common ingredient in over-the-counter pain medication – is toxic to brown tree snakes. And, as scavengers, the species is one of the few snakes willing to eat something that it has not itself killed and can therefore be enticed to ingest the tainted mice.‡ In September of 2010, preliminary bombardments began. To ensure that they end up in trees, where snakes will have better access, the acetaminophen-laced rodents are fitted with wide cardboard parachutes designed to get caught in branches. The goal is to refine the technique and then do larger-scale drops throughout the jungles, where it is challenging to install traps on foot. It has yet to be seen how well acetaminophen will be able to soothe this particular headache. In the meantime, here is a recipe for Snake Adobo.

* I should note that Guam’s citizens aren’t necessary tripping over snakes at every turn. Some people rarely see these slender nocturnal animals.

† At the end of WWII Guam became the U.S. pacific military headquarters and a boatload (and planeload) of equipment was stored there.

‡ The amount of drug needed to kill an adult snake is small (roughly the amount in a dose of children’s Tylenol), but since dead mice don’t grow on trees, researchers are also working on creating cheaper synthetic bait options.

Horseshoe crabs have something for everyone

Lemurs are an island unto themselves

Striped bark scorpions are deep in the heart of Texas