Lifeform of the week: Armadillos

From the pink fairy to the screaming hairy, armadillos are a most peculiar mammal. 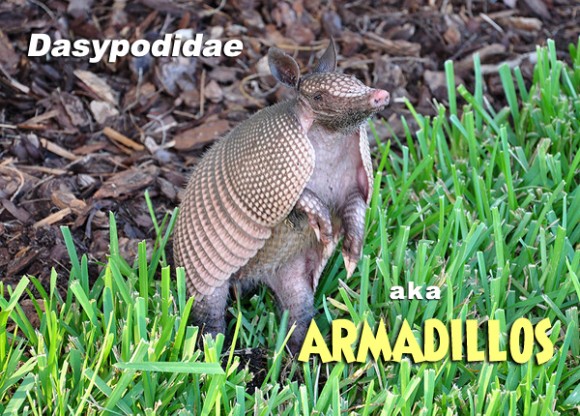 I’ve been living in Texas for over six years now and blogging about animals for four of those years. And yet not once have I written about armadillos, a shameful omission which I will remedy today in this latest installment of Lifeform of the Week. Join me, dear reader, as there is much to learn…

For instance, until recently I believed one particular species – the nine-banded armadillo – to be the official state mammal of Texas. But it turns out it’s only the small state mammal. We also have a large state mammal (the Texas Longhorn) and a flying state mammal (the Mexican free-tailed bat). All this state symbol hoarding is a bit greedy, if you ask me. Just pick a mammal, Texas. You can’t have them all. Nevertheless armadillos are an important part of the state’s identity. Charming some with their paradoxical appearance, annoying others with their tendency to dig up lawns, and constantly littering our highways with their adorable armored carcasses.

Mammal in a shell 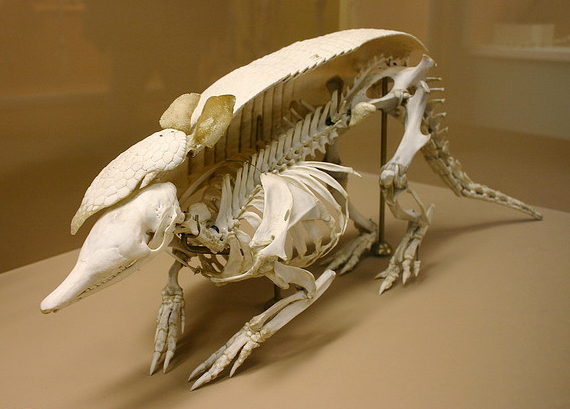 Armadillos are new world mammals, originating in South America. Most of the 21 extant species are found only on that continent, but a few have ventured northward to Central America and, in the case of the nine-banded armadillo, have even crossed the U.S. border.

Those of you residing in non-armadilloed parts of the world may be surprised to learn that they’re mammals at all. That’s understandable. If asked to sort the armadillo upon first sighting, most people would place it somewhere closer to reptiles. In reality, sloths and anteaters are armadillos’ nearest relatives, but the shell (called a carapace) immediately evokes turtles. 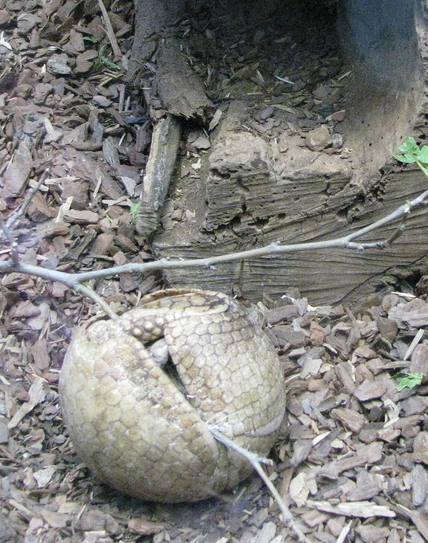 The armadillo carapace is formed in the dermal layer of the animal’s skin (after formation of the skeleton) and is composed of boney scale-like structures called scutes, topped with a layer of keratin (a component of hair, nails, and horns). The basic carapace structure for most species is one piece covering the shoulders, another covering the rear, and some bands in the middle. Limbs, face, and tail are also usually armored (though naked-tailed armadillos – genus Cabassous – forgo that last bit).

Whether the carapace evolved specifically to shield armadillos from the jaws of predators is debatable. And only three-banded armadillos (genus Tolypeutes) are capable of rolling themselves into an impenetrable ball when threatened. The shell may also offer protection from fellow armadillos (they do fight, especially during the mating season) and it allows them to tromp merrily through thorny vegetation that would shred the hides and/or cargo pants or less armored species.

Besides the carapace, the other crucial anatomical feature shared by all species of armadillo is claws. Armadillos spend a good deal of time digging and their feet are equipped with varying degrees of sharp talons to accomplish this task. 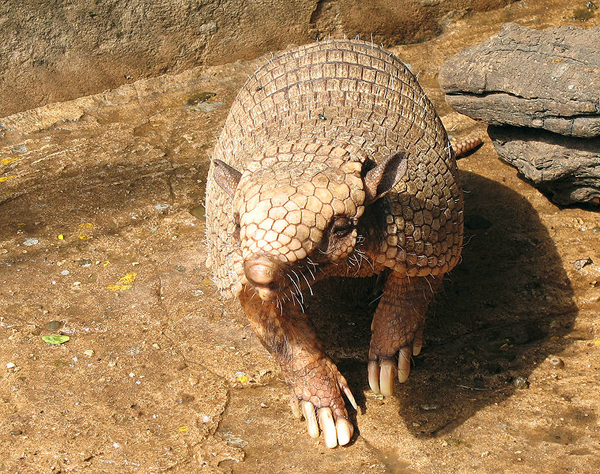 The six-banded armadillo and its formidable claws. Image: Whaldener Endo.

The digging is for both room and board. The room part involves the excavation of burrows. Some species, like the pink fairy armadillo (the smallest, and by some accounts cutest, species of armadillo) live almost entirely underground, whereas others just use burrows for sleeping and nest building.

And all armadillos dig for their dinner. While some species supplement their diet with fruit, invertebrates, and even carrion, all seem to enjoy unearthing a good bug. The biggest and scariest claws are found on armadillos that specialize in tearing open the nests of social insects. For this reason, and because it can reach a mass of 45 kg, do not want to mess with the giant armadillo (Priodontes maximus) an avid connoisseur of termites. 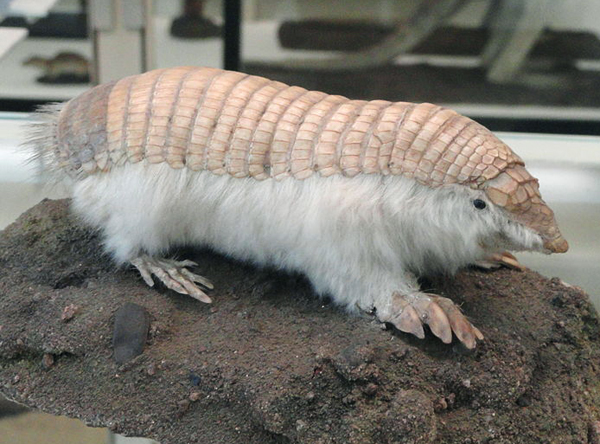 Armadillo diversity in South America isn’t bad. As mentioned, they range from tiny (pink fairy armadillo) to enormous (giant armadillo). There are three-banded and six-banded armadillos. There long-nosed armadillos and screaming hairy armadillos (the latter of which can be rather vocal when startled). But here in the United States, we just have the one species – Dasypus novemcinctus, the nine-banded armadillo.*

Our armadillo is a relative newcomer to the U.S., first reported in the Rio Grand Valley only in the mid-nineteenth century. But in the 150 plus years since, the species has rapidly increased its range, which now covers much of Texas and Louisiana, and stretches as far north as Nebraska. Nine-banded armadillos have also set up shop in Florida and parts of Georgia, but that was a separate invasion/expansion caused by the usual Florida factor of captive animals escaping into the wild (oh, Florida, when will you learn?).

Reshaping of the southern U.S. landscape by settlers in the 19th century likely helped nine-banded armadillos expand their range, as did the displacement of Native Americans, who were more willing than Europeans to hunt the animals. But the critters also benefit from not being too set in their ways. They’re flexible in what they eat and where they live, and they don’t seem especially put out by being in close proximity to humans. 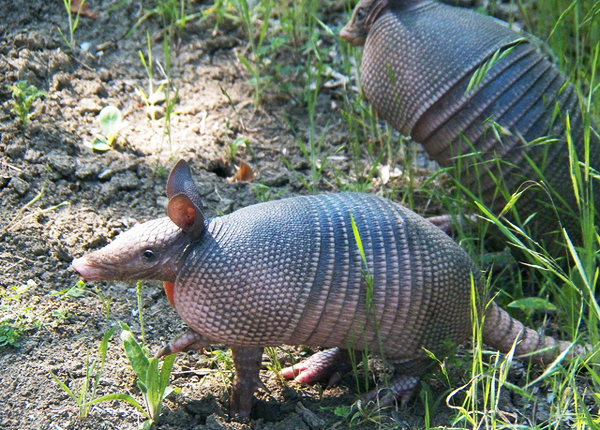 The nine-banded armadillo; one of the many official state mammals of Texas. Image: Robert Nunnally.

Nine-banded armadillo may also have an advantage when it comes to reproduction. While females only mate once a year, and only release one egg at a time, that single fertilized egg consistently yields four offspring – genetically identical quadruplets. Four kids for the price of one egg. Not a bad deal if you’re looking to increase your numbers. The phenomenon is called obligate polyembryony (meaning it’s the rule rather than the exception, unlike the fluky twinning seen in mammal species like ours), and is shared by other armadillos of the Dasypus genus. The nine-bander isn’t even the most prolific of the lot. The southern long-nosed armadillo (Dasypus hybridus) produces litters of 6-12 identically adorable armadillo pups.

Can anything stop the nine-band armadillo’s merciless march north? Well, colder and drier climates seem to slow them down a little. But the rest of you can expect to find them gutting your flower gardens as they forage for tasty insects.

It’s perhaps best that non-native Americans aren’t especially keen on hunting armadillos for food, as the animals are now notorious carriers of leprosy. While still prevalent in some parts of the world today, leprosy has largely been eradicated in the United States. But of the cases that do occur here, many may be due to contact with armadillos. Though don’t be too quick to judge. Leprosy didn’t exist in the Americas prior to colonialism. So if you must blame anyone for armadillo-to-human leprosy transmission, blame Europe.

In terms of scientific research, armadillo leprosy has proven rather convenient. They’re the only animals besides primates capable of hosting the bacteria that cause the disease, and as a result have become the go-to research animal for its study. Armadillos are actually more susceptible to leprosy than our species, due to their body temperature, which is low by mammal standards and especially hospitable to the bacteria. [Bonus fact: Another consequence of their cooler body temperature is that male armadillos needn’t worry about overcooking their delicate gametes. Testes can thus be safely housed in the abdomen, rather than dangling precariously in the external scrotum of the typical XY mammal.]

Kings of the road

My first nine-banded armadillo sighting occurred within a month of moving to Texas. The animal was noisily foraging just outside the fence of my father’s backyard, inciting much frantic yelping and lunging from his dogs. My tale is unusual, I’m told, in that most Texans see multiple dead armadillos on the side of the road before ever encountering a living specimen.

Some claim that the nine-banded armadillos’ defensive strategy of jumping (rather than simply running) when startled is the cause of their unhappy interactions with automobiles. While this could certainly be a factor, another possibility is that the species’ generally beneficial ability to tolerate human proximity works against them in this case. They may be so unperturbed by the sound of human activity (cars included) that they don’t realize they’re in danger until it’s too late. Either way, armadillos aren’t actually the most numerous car-killed cadavers found on southern U.S. roadways, coming in only third after skunks and opossums. Perhaps they’re just the most memorable.

* Much of the information on nine-banded armadillos in this post comes from The Nine-Banded Armadillo: A Natural History.

This article was originally published in February 2015.