To meet demand for oil within U.S. borders, industry has pushed the limits of technology to reach oil reserves in deep waters of the Gulf of Mexico.

To meet demand for oil, industry has pushed the limits of technology to reach new oil reserves. In the deep water of the Gulf of Mexico, some estimates say there is enough oil to power the United States for 10 years or more. Geoscientist Lesli Wood is a Senior Research Scientist with the Bureau of Economic Geology at the University of Texas at Austin. Dr. Wood talked with EarthSky about the current challenges and future innovations involved in exploring for oil in the deep waters of the Gulf of Mexico.

How much oil is there in the Gulf of Mexico?

There seems to be always more than we conservatively estimate. And so that speaks very well for our energy future. In fact, I think that as long as we have intelligent people who are out there searching for energy sources, and looking to pave that way, the future for energy in the U.S. looks very bright.

What we think now is that there are about 50 billion barrels of oil equivalent in the deep Gulf of Mexico. Back in the 1990s, we thought that there were about 25 billion barrels, but there’ve been some new discoveries recently.  And that’s made us look at some new opportunities in the Gulf.

We think we have a fairly good idea of the conventional traps – that is, places where we are used to finding hydrocarbons.  We’re fairly confident that if we go in and we drill a well into one of those similar places we’ll be able to find them again.

And then there’s an entire area in the Gulf of Mexico that’s very, very deep.  It’s an area in the Gulf where we currently have very few wells. It’s very difficult to see so deeply down in the stratigraphy – that is, the order and relative position of strata below Earth’s surface – related to those areas of the Gulf. But based on what we know, we can make some estimates of hydrocarbons in those areas of the Gulf of Mexico. What we know about the gas, the oil, and other types of energy reserves that exist in the deep Gulf is changing all the time. With every new data point that’s found, with every new student who wants to go in and do some research, with every new seismic line or piece of data that’s shot, or every well that’s drilled, we discover new things about the oil resources in the Gulf of Mexico. We do know there is a lot of oil still remaining in the Gulf region. And it’s imperative for us to understand it better in order to contribute to the energy security of the United States and the world.

How do you know this oil is there, thousands of feet below water and ground? 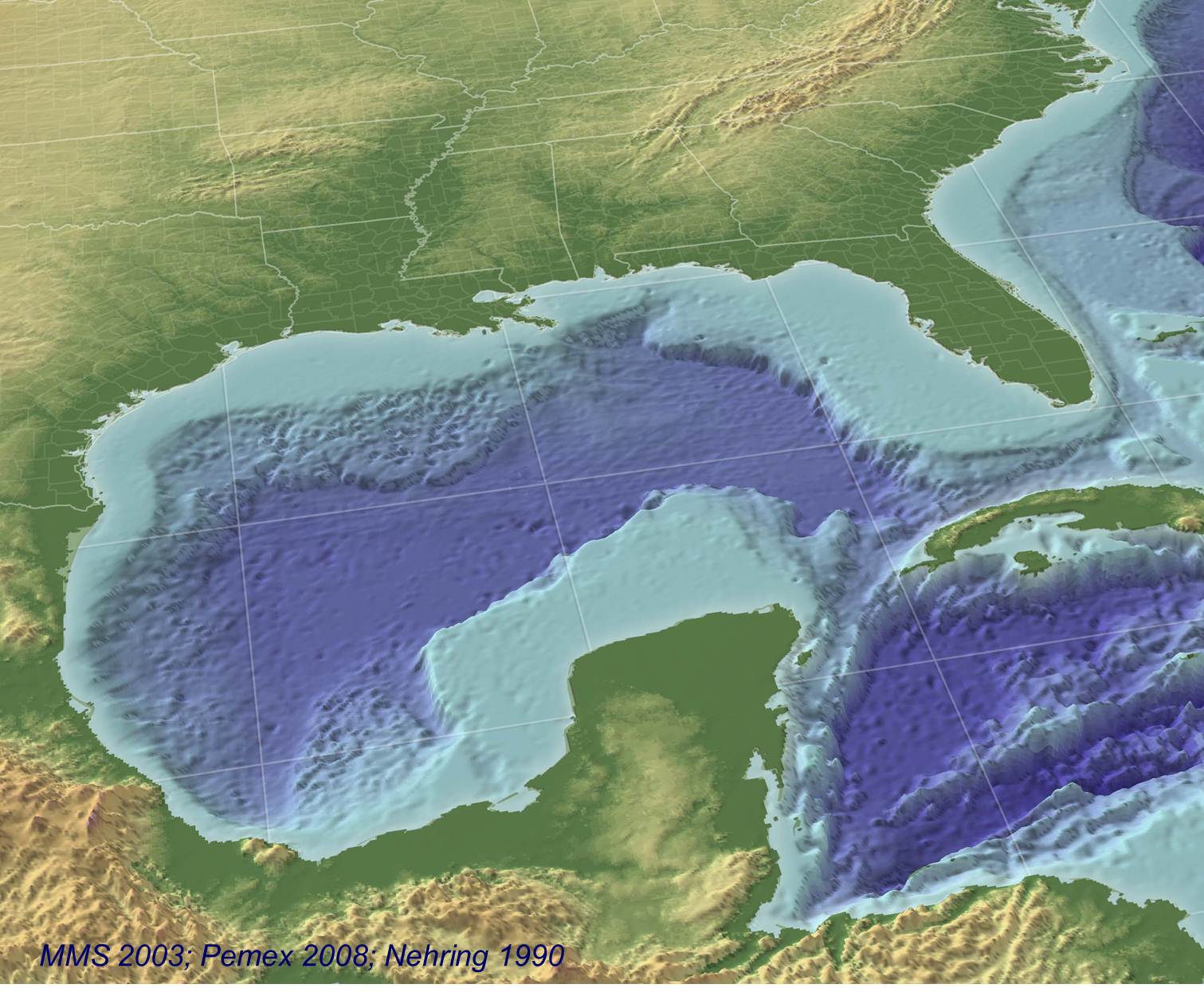 Three-dimensional image of the topography of the US and Mexico regions surrounding the Gulf of Mexico, and the marine basin beneath the waves. Lighter blues represent shallow shelf waters and deeper blues reflect the deeper water areas. Image courtesy of ESRI Data and Maps (2000)

We rely on our ability to predict what are productive trends and what are not productive trends. We know that large basins around the world that have big deltas and big river systems feeding sediment into them have a source rock for oils. And we believe that the Gulf of Mexico basin has a history where rich organic shales and rocks were laid down that could be buried and heated and matured into oil. Just by the very nature of the setting, we think that it might be a profitable place to look for oil and gas.

Then, we go in and assess the basin through remote sensing. We can’t reach down there and put our hand in an oil and gas reservoir. But we can use geophysical information to image the subsurface – much as you would obtain an x-ray image of someone’s body – to help see inside the stratigraphy – or the body of the Gulf of Mexico – and map the rocks that are down there.

For example, the way the sound waves respond to the rocks can sometimes tell us what types of fluids are in the rocks. We’re always looking for new tools and technologies such as nanotechnologies or new geophysical technologies that can tell us something interesting about what’s down beneath the surface of the Earth.

But the ultimate proof of whether there are oils down in the Gulf of Mexico is going to be the drill bit. There’s no better technology than to drill down and see what is down there. And with tens of thousands of wells drilled in the Gulf of Mexico over the years, we have a pretty dense data set.

It also is good to go where you have been successful. We have had a lot of success in the Gulf of Mexico. We produce almost two million barrels of oil and five million cubic feet of gas a day from the Gulf of Mexico now. We know there are hydrocarbons down there. It’s just a matter of extracting it safely, economically and efficiently.

What are some of the biggest challenges in exploring for deep water hydrocarbons – oil, and natural gas? 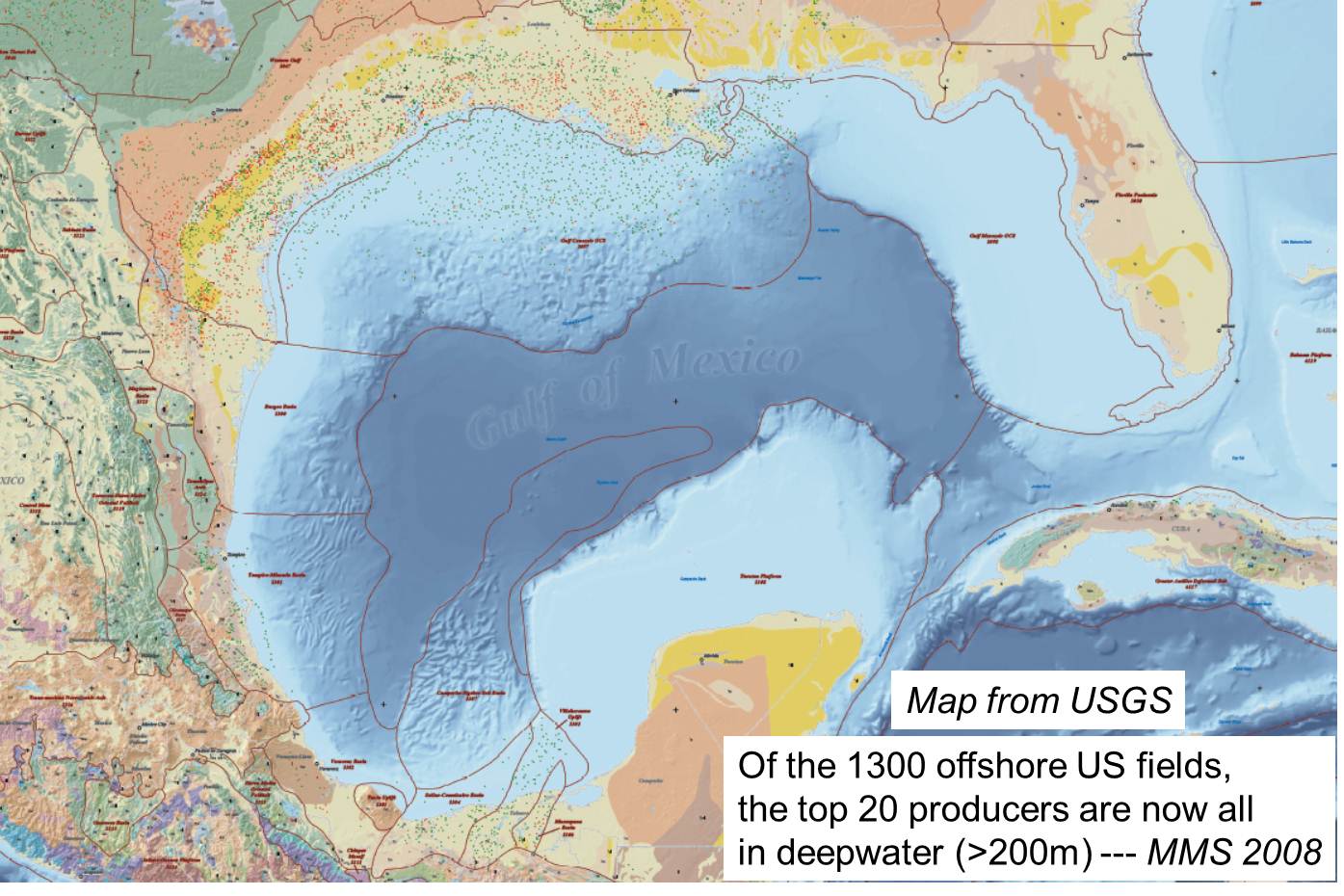 Map from the United States Geological Survey showing the onshore and offshore topography/bathymetry. Blue color represents the marine waters with darker colors representing deeper water (>200 meters). Of the 1300 offshore US fields in the Gulf of Mexico, the top 20 producers are now all in deep waters.

In 2002, a well called the Trident was drilled in the southern Gulf of Mexico in about 8,000 feet of water. The well discovered the Great White oil field, now being produced through the Perdido Spar (see Perdido photo in this interview). Then in 2010, a company drilled another well in 10,000 feet of water. In a very short amount of time, we were drilling deeper and deeper in the Gulf of Mexico.

Often times the information that we have is not keeping pace with the challenges that we face in drilling deeper and deeper into the Gulf of Mexico. One of the biggest challenges that we face is trying to predict not only what we’re going to see stratigraphically, in the various Earth layers, but also what we’re going to face in terms of safety and environmental issues as we drill down into these deeper and deeper waters. It is a dangerous business.

But you cannot discover new frontiers without exploration risk. Explorers going to the North Pole at the turn of the century knew that they were trying to explore new territories, and they had very little information to fall back on. You have to make the best guess that you can about the conditions and opportunities that you’re going to face. You have to move forward. If we’re going to open up new frontiers and new ideas in energy resources, we’re going to have face some challenges.

So I think the biggest challenge that we face is trying to explore ever deeper in the Gulf of Mexico and trying to contribute to the energy resources of the U.S. in more challenging environments – like the Arctic and the ultra-deep Gulf of Mexico – with very little data. As we collect our data we’re going to run into some challenges. Each new challenge is an opportunity to learn.

Once you know oil and hydrocarbons are there, how are they reached? 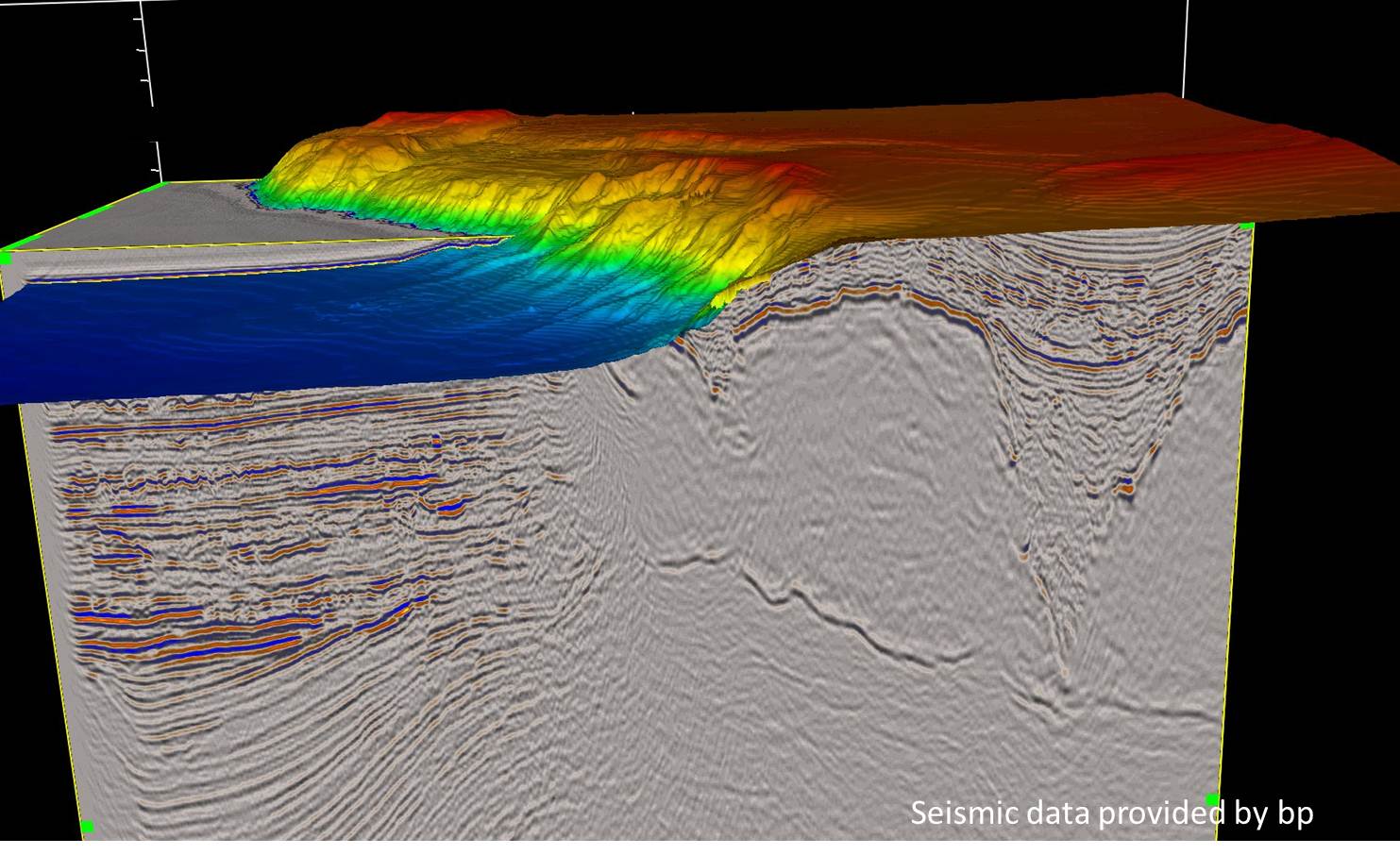 Geophysical seismic data can provide an image of the seafloor and the rocks beneath the seafloor that allow us to explore for hydrocarbon traps in deep water, as well as mitigate the safety issues associated with the exploration and production facilities. Image courtesy of Dr. Lesli Wood

Once we know where we want to drill, researchers go in and do an assessment of the sea floor and the hazards that exist. Before engineers can even design a rig and deploy it for drilling , we need to know things like, what types of sea floor colonies of animals exist? What is sub sea floor like? Is it muddy, is it firm? What are the dangers that we face with currents and waves?

When the engineers and drillers take over, a geologist and a geophysicist work with them to make sure that things are done safely and that they hit their target. Hitting the exact target is kind of like extending a soda straw from an airplane at 33,000 feet and trying to hit someone’s house. The offshore drilling industry has become very successful at hitting small targets miles below the seafloor.That’s the type of the challenge that you face when you’re trying to drill a well in deep water.

After they’ve found the target, they’ll then go in set up a fairly large structure for production operations. Additional wells are drilled to develop the newly discovered field. Throughout this entire process, we have new technologies which are attached to drillstring near the drill bit to monitor the conditions in the borehole, and there are geoscientists both on the rig and on shore who are remotely monitoring what’s going on at the bottom of the hole. For example, what’s the pressure? What’s the temperature? How fast is the bit turning? Do we have gas or oil that are coming back into the well? They also assess the rocks that are getting drilled as small chips of rock come up out of the borehole to see what formation are they in.

Where are the new ideas coming from that will create innovation and oil and other hydrocarbon explorations in deep water? 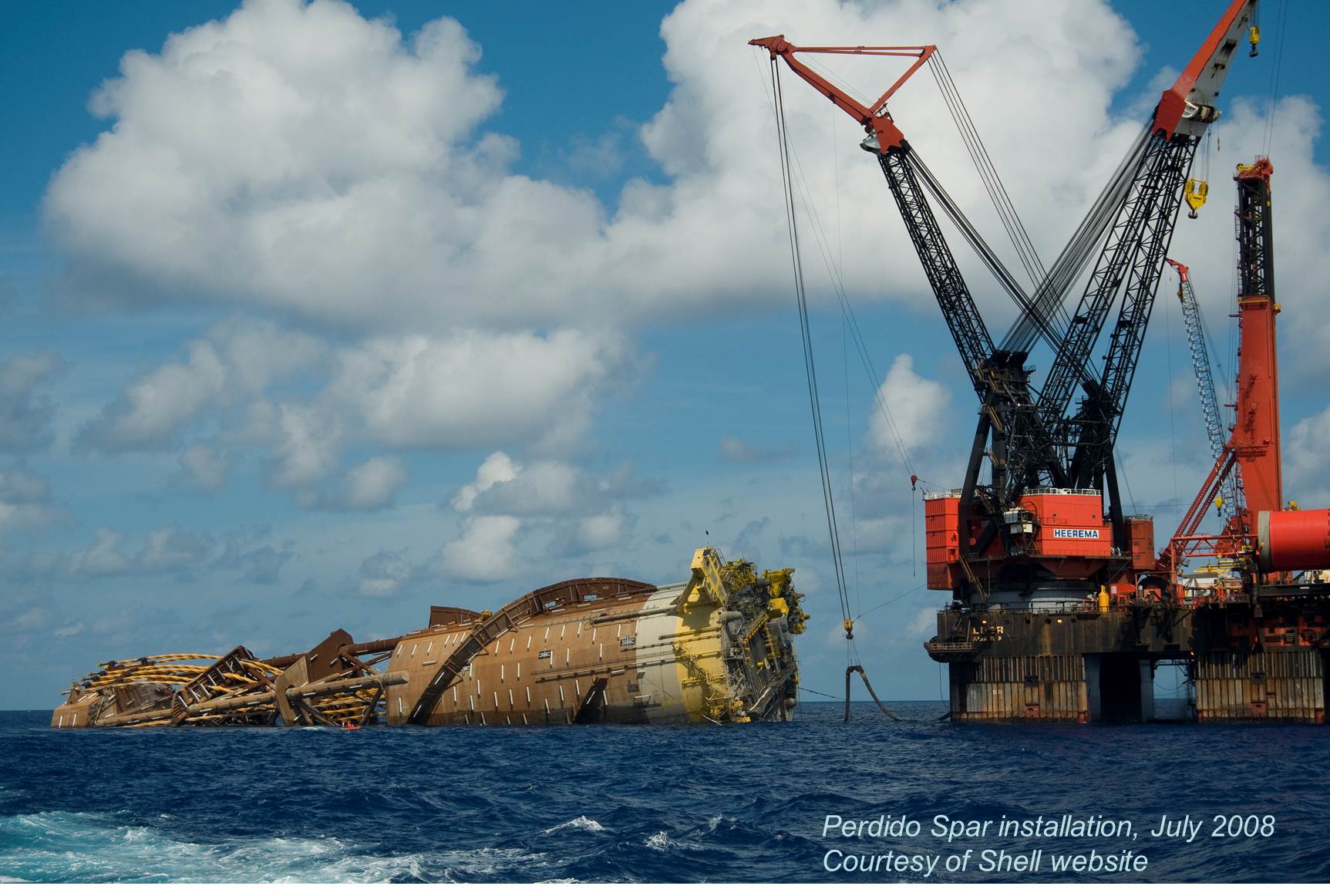 Picture showing the floating barge (right) deploying the deepwater floating tethered structure called the Perdido Spar that will be the foundation for production facilities and living quarters. Location is in the deepwater of the Gulf of Mexico 150 miles from southern Texas coast. Image courtesy of Shell website

As we’ve developed computing technologies, we’ve developed an increased ability to do things a lot more efficiently. For example, we can image the subsurface of the Earth like never before. We can image it in four dimensions – three-dimensional imaging of reservoirs in the subsurface and then we can track that over time. We can actually see how a borehole is filling with oil and how the hydrocarbons are evacuating the reservoir. We can improve our efficiency of production.

The other thing that seems to be growing these days is research programs in the development of the use of nanotechnologies. An example of this is the concept of developing micro-sensors,micro-feeders of information that you could actually put down in the borehole and that will travel through the rocks and the pore spaces of the rocks. These little micro sensors are small, way smaller than a human hair. They could feed back information to computers on what the inside of the rock looks like, getting a vision of the rocks in the subsurface like we’ve never had before.

Anything else you want to tell our readers?

I think some of the biggest challenges facing us today are how to continue to produce the large amounts of hydrocarbon that we use and need in this country. We need it to continue to build our socity and maintain our economic standard of living. Also, there’s the challenge of how we do that safely and efficiently, while balancing people’s concerns about environmentally-sensitive areas and safety-sensitive exploration developments.

I read Shackleton’s account of his trip to Antarctic, and I’m amazed at what people will put themselves through both intellectually and physically to search and discover new things.