The groundhog’s prediction of an early spring in 2013 looks highly unlikely now for the U.S. Late February and early March look active and stormy!

The weather in the middle of February has been quite active with series of storm systems developing and traversing the United States. On February 21, 2013, we had a large area across the central United States see over a foot of snow. Wichita, Kansas recorded 14.2 inches in that particular storm, and more snow is on the way. Punxsutawney Phil’s prediction of an early spring looks highly unlikely for the United States in late February and early March. If you love cold and stormy weather, you will love this weather pattern. However, if you prefer an early spring, you might want to move to the tropics to warm up! 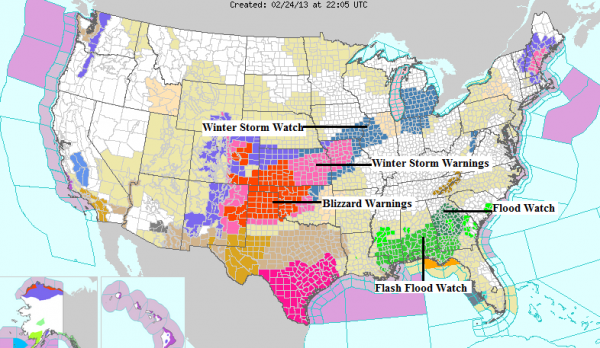 Heavy snow and flooding rains are becoming common across the United States in late February 2013 as an active weather pattern shapes up. Image via National Weather Service.

In the image above, you can see all of the active watches and warnings across the United States on February 24, 2013. The central U.S. is currently seeing a strong storm system bringing blizzard conditions across northern Texas, western Oklahoma, and southwest Kansas. Meanwhile, the southeastern U.S. is having a stormy Monday. Severe storms are possible along the Gulf Coast, and heavy rain and possibly flooding will impact parts of southern Mississippi, Alabama and Georgia today. This is just one example of the active weather pattern that is currently developing across the United States. Why is the weather becoming so active? We need to look at the jet stream!

The jet stream is a narrow, variable band of very strong, predominantly westerly air currents encircling the globe several miles above the earth. Behind the jet stream in the Northern Hemisphere, cold air from the Arctic is pushing to the south. The jet stream acts as a boundary that separates the cold air from the warm air mass to the south. When the jet stream digs or advances further south, storms can develop and typically travel along this flow. Overall, the jet stream is pushing further south causing significant troughs, or low pressure across the United States. Lows are forming in California, intensifying as they hit the central U.S., push to the northeast, and can tap into the Gulf of Mexico to bring a lot of moisture to the U.S. Southeast. Sometimes, new waves of energy or areas of low pressure can form and develop along the jet stream, which could form further south and east and thus impact the eastern United States. As troughs dig in the U.S. East, ridging likely develops across the western United States (see image below). When the jet stream digs as far south as the models are indicating next week, unsettled weather looks likely, especially for the eastern United States.

The GFS model indicates very cold air spilling as far south as Florida by the first weekend of March 2013. Image indicates an idea of the jet stream, the ridging in the western United States, and the large trough digging in the eastern U.S. Image via COD Weather

The AO and NAO are both negative, which is influencing the stormy pattern across the United States towards the end of February and early March. Image via NOAA

One of the reasons we are experiencing an active weather pattern is that the North American Oscillation (NAO) and the Arctic Oscillation (AO) is negative. In the AO, or Arctic Oscillation, we mainly focus on the cooling and warming of the stratosphere in the North Pole as it influences the overall pattern. In a positive AO phase, the stratosphere is colder and pushes storm systems into Europe. Cold air is typically trapped further north, and it typically has a difficult time pushing south. As you can guess, a negative AO is the opposite and it brings colder air further south to the east coast and parts of Europe. The NAO, or typically fluctuates more than the AO, and typically influences weather patterns in the short term range. When the NAO is positive, a stronger than usual subtropical high pressure center and a deeper than normal Icelandic low occurs. In this phase, troughs typically do not dig into the eastern United States. Instead, the eastern United States and Europe experience warmer and wetter conditions. In a negative NAO, the phase shows a weak subtropical high and a weak Icelandic low. In this phase, Greenland experiences warmer winters while colder air invades the eastern United States and Europe. As you see in the image below, both of these indicators are negative. Of the two, the AO is the most impressive with the reading dropping in the -2 or -3 range.

By the way, we’ve gotten many beautiful photos of snow and ice recently on EarthSky’s Facebook page. Here are just two … 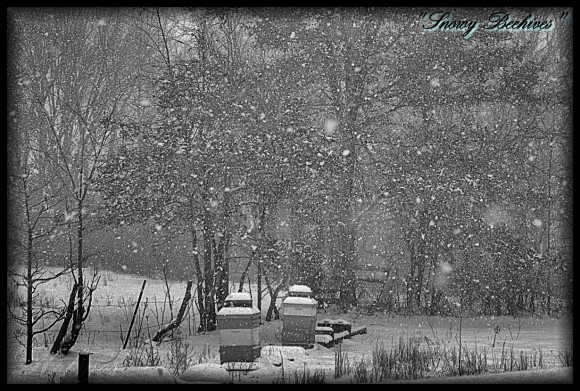 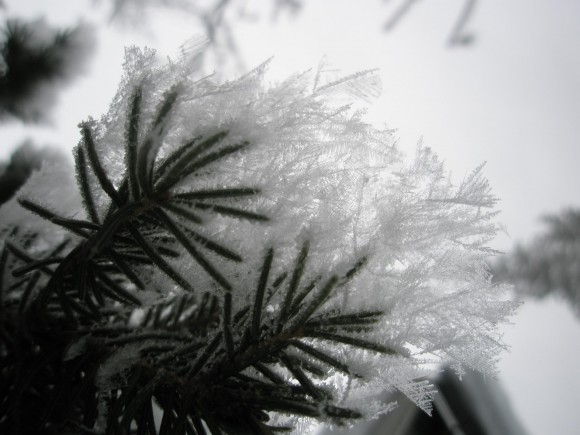 The ice crystals take the shape of the pine needles in this photo from EarthSky Facebook friend Sofia Lind. Posted February 23, 2013. Thank you, Sofia!

Bottom line: Active weather will continue across the United States for the end of February 2013 and into early March. The jet stream will remain very active and will allow plenty of opportunities for cold surges to spill as far south as the Gulf Coast by next weekend. Blizzard conditions are already occurring the central United States, and flooding rains are already spreading northward into the U.S. Southeast. Should be a fun couple of weeks, especially if you enjoy active weather. If the weather is severe, make sure you listen and follow your local weather stations for the latest updates. Be safe!