The last mammoths died on a remote island

A new study suggests that about 4,000 years ago, a combination of isolation, extreme weather, and the arrival of humans on Wrangel Island in the Arctic Ocean killed off Earth’s last population of mammoths. 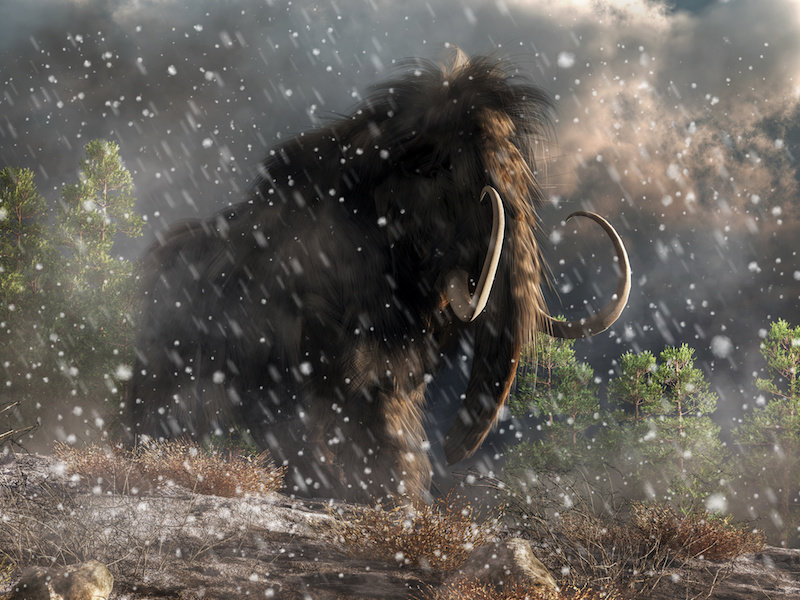 The last population of woolly mammoths on Earth lived on Wrangel Island, a remote island in the Arctic Ocean, say scientists, and they died out 4,000 years ago within a very short time. A new study by an international research team suggests that a combination of isolated habitat and extreme weather events, and even the spread of prehistoric humans, was what sealed the mammoths’fate.

During the last ice age – some 100,000 to 15,000 years ago – woolly mammoths were widespread in the northern hemisphere from Spain to Alaska. Due to the global warming that began 15,000 years ago, their habitat in Northern Siberia and Alaska shrank. On Wrangel Island, some mammoths were cut off from the mainland by rising sea levels. That population survived another 7,000 years. 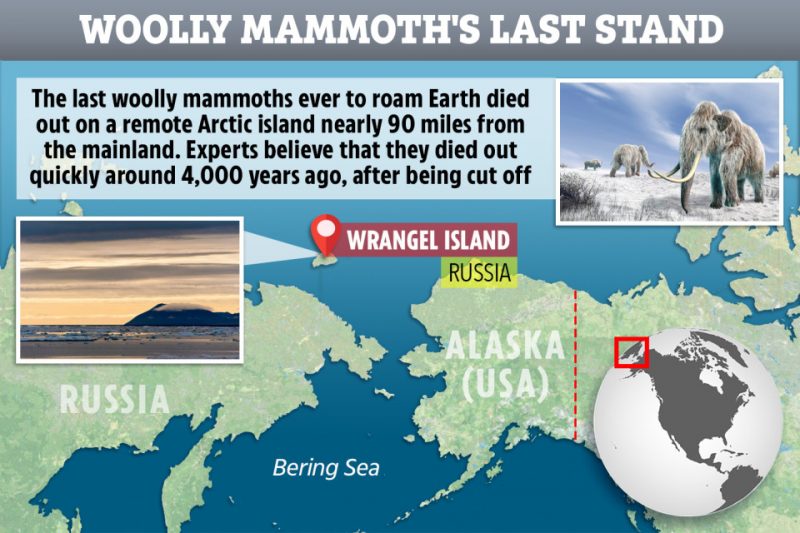 Image via The Sun.

The team of researchers from Finland, Germany and Russia compared mammoth bones and teeth found on Wrangel Island with other populations of mammoths. They looked at carbon and nitrogen isotopes, which provide the scientists with information on the animals’ nutrition and metabolic functioning for thousands of years before they went extinct. The aim was to document possible changes in the diet of the mammoths and their habitat and find evidence of a disturbance in their environment.

Laura Arppe, from the Finnish Museum of Natural History, is the lead author of the study, published October 15, 2019, in the peer-reviewed journal Quaternary Science Reviews. She told Newsweek:

Judged from the numbers of radiocarbon dated mammoth bone finds on Wrangel island, this last island population appears to have vanished rather abruptly. There [are] no signs of a dwindling population size before the extinction. [It’s] kind of like they hit a wall at approximately 4,000 years ago. All the major changes in climate and range size had taken place long ago: the change to the warm Holocene climate at about 10,000 years ago, the isolation of the island and its reduction to present-day size at about 8,000 years ago.

Mammoth tooth on the riverbank on Wrangel Island. Image via Juha Karhu.

Why then did the last woolly mammoths disappear so suddenly? The researchers suspect that they died out due to short-term events, such as extreme weather. One example is an icing event that could have covered the ground in a thick layer of ice, preventing the animals from finding enough food. That could have led to a dramatic population decline and eventually to extinction.

Hervé Bocherens, of the University of Tübingen, is a co-author of the study. Bocherens said in a statement:

It’s easy to imagine that the population, perhaps already weakened by genetic deterioration and drinking water quality issues could have succumbed after something like an extreme weather event.

Another possible factor, said the researchers, could have been the spread of humans. The earliest archaeological evidence of humans on Wrangel Island dates to just a few hundred years after the most recent mammoth bone.

The study shows how isolated small populations of large mammals are particularly at risk of extinction due to extreme environmental influences and human behavior. An important takeaway from this is that we can help preserve species by protecting the populations that are not isolated from one another.

Bottom line: A small and isolated population, inclement weather and even the arrival of humans might have caused the last woolly mammoths to die off only 4,000 years ago on far-north Wrangel Island.