Discovery of largest-ever winged dino in China, from 125 million years ago. It was sleek and birdlike with feathers on its arms and torso, but it could not fly. 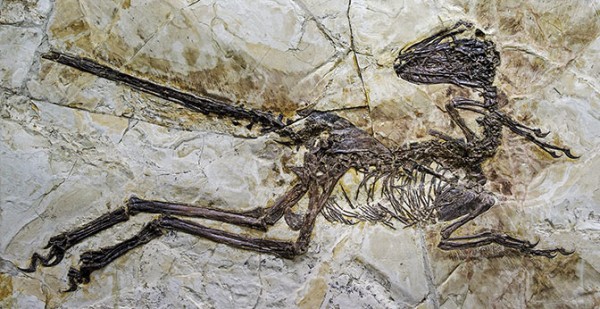 Paleontologists from China and the UK have discovered the fossil remains of the largest winged dinosaur yet known, providing new details on the formation of wings, feathers, and the eventual evolutionary split between modern birds and their ancient dinosaur ancestors. Published by paleontologist Junchang Lui of the Chinese Academy of Geological Sciences in Nature’s Scientific Reports in July 2015, the nearly complete specimen has been named Zhenyuanlong Suni. It measures 5.5 feet (1.6 meters) and is preserved with multiple layers of feathers along its arms and torso. This large dinosaur, believed to weigh over 40 pounds (20 kilograms), could not fly. Researchers believe its feathers and wings might have evolved to serve other functions, such as attracting mates and warming eggs.

An analysis of the 125 million-year-old Zhenyuanlong Suni’s short forearms and dense bone structure reveal that the animal was to heavy to fly, despite its thick plumage. At about 5.5 feet (1.65 meters) long, the dino was a little longer than a modern condor, but probably nearly twice as heavy.

Yet unlike other feathered dinosaurs in its fossil family, it evolved complex quill-like feathers, typically found in modern birds.

This puzzling find highlights the fact that many features that paleontologists once believed to be exclusively avian were actually first established much earlier in dinosaurs. That is why some today call birds living dinosaurs. 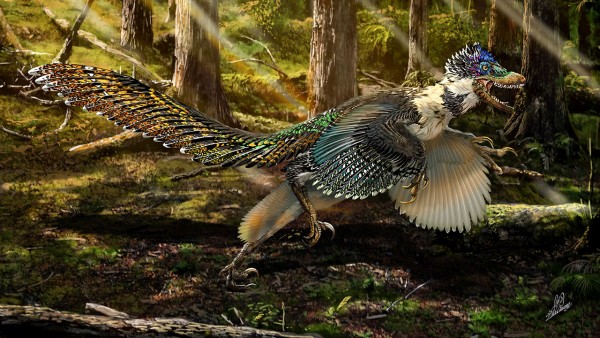 Over the past decades, new fossil specimens from northern China have added more detail to the previously mysterious origins of feathers and wings in dinosaur evolution. Previous discoveries of flying dinosaurs, such as the Microraptor, led to the formation a new branch of dinosaurs called Dromaeosaurs, the closest branch to modern birds.

This specimen is particularly important because it helps confirm that the evolution of dinosaur wings, and therefore the wings of birds, was not necessarily tightly coupled to the evolution of flight.

It could be that species like Zhenyuanlong maintained complex feathers in a similar evolutionary path to that of modern flightless birds, such as ostriches and penguins. Those species are thought to have lost the ability to fly from their flight-capable ancestors.

Meanwhile, other researchers believe that the wings and feathers of these dinosaurs served an entirely different purpose, exclusive to flight, such as attracting mates with colorful plumage or aiding in incubating eggs. Alex Dececchi, a paleobiologist at Queen’s University in Kingston, Canada, is one expert who agrees that Zhenyuanlong’s feathers and wings might have been used for sexual display or other kinds of signaling. He told Science:

We know that large feathers appeared even earlier in the lineage leading to birds, as did brightly colored plumage. This suggests that display likely had a big role in the lives of dinosaurs.

As new fossils continue to emerge, the evolution of feathers and wings rewrite the picture of modern birds and dinosaurs, while adding new detail to our understanding of dinosaur behavior and the emergence of flight.

Bottom line: A new dinosaur find in China – named Zhenyuanlong Suni – lived 125 million years ago. Its sleek, birdlike body – and layers of feathers on its arms and torso – did not mean it could fly.