Scientists believe a huge impact scar, hundreds of miles wide, came from an asteroid that broke in two moments before slamming into the central Australian outback. 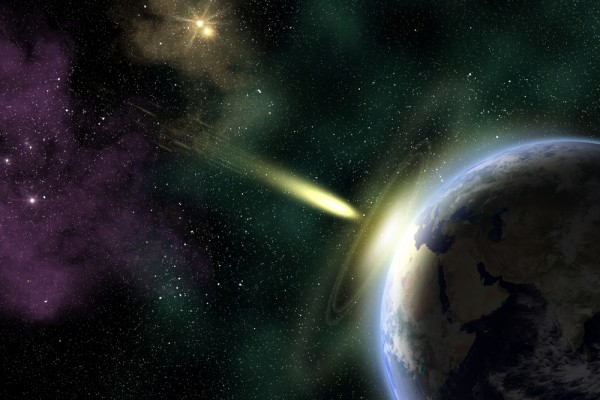 Scientists in Australia have discovered a 400-kilometer-wide (250-mile-wide) impact zone from a huge asteroid that broke into two chunks moments before it slammed into the ground millions of years ago. It’s the largest impact zone ever found on Earth. The findings appear in March, 2015 issue of the geology journal Tectonophysics.

The crater from the impact has long disappeared. But a team of geophysicists has found the twin scars of the impacts.

Lead researcher Dr. Andrew Glikson from The Australian National University (ANU) said the impact zone was discovered during drilling as part of geothermal research, in in the Warburton Basin, an area near the borders of South Australia, Queensland and the Northern Territory. Glikson said:

The two asteroids must each have been over 10 kilometers (6 miles) across – it would have been curtains for many life species on the planet at the time.

The size of the impact zone is more than four times the size of the zone created by the asteroid that struck Mexico’s Yucatan peninsula 66 million years ago, which many scientists believe caused the “KT extinction event” that wiped out the dinosaurs.

The exact date of the impacts remains unclear. The surrounding rocks are 300 to 600 million years old, but evidence of the type left by other meteorite strikes is lacking. Glikson said:

It’s a mystery. We can’t find an extinction event that matches these collisions. I have a suspicion the impact could be older than 300 million years.

The revelation of such ancient violent impacts may lead to new theories about the Earth’s history. Glikson said:

Large impacts like these may have had a far more significant role in the Earth’s evolution than previously thought.

A geothermal research project chanced on clues to the impacts while drilling more than two kilometers into the earth’s crust. The drill core contained traces of rocks that had been turned to glass by the extreme temperature and pressure caused by a major impact. 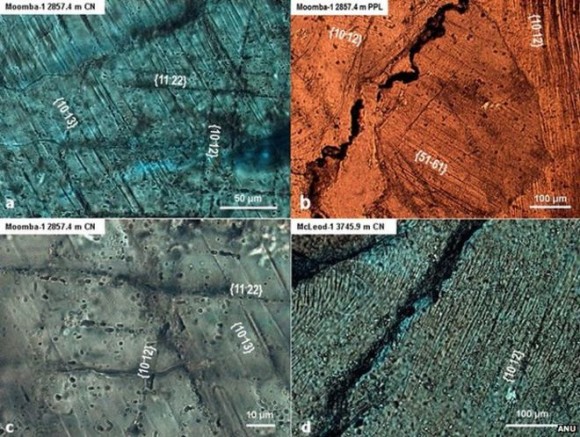 Imaging of the rock in the Warburton Basin revealed deformation consistent with a huge impact. Image credit: ANU

Bottom line: A study in the March, 2015 issue of Tectonophysics describe a 400-kilometer-wide (250-mile-wide) impact zone from a huge asteroid that broke into two chunks moments before it slammed into central Australia millions of years ago. It’s the largest impact zone ever found on Earth.