Meteorological spring begins in March. However, heavy snow and wind are the dominant story in the U.S. Midwest and Mid-Atlantic.

A strong area of low pressure brought heavy snows across the U.S. Midwest Tuesday (March 5) and is currently bringing snow and rain across the Mid-Atlantic. The Weather Channel has called this storm “Saturn”. Meanwhile, Jason Samenow and the Capital Weather Gang has titled this storm “Snowquester”. By whatever name, the storm is causing significant impacts to everyday life across these regions.

Chicago had their best snows since the 2011 Groundhog Day Blizzard. The Chicago O’Hare Airport recorded ten inches of snow Tuesday, a significant amount for this area, since snowfall totals have been below average for the past couple of years. The storm has intensified around a 994 millibar low pressure off the coast of the U.S. Mid-Atlantic and has brought heavy snow and rain to northern Virginia, northeast West Virginia, parts of Maryland, and across southern Pennsylvania. Meanwhile, strong winds have been affecting the majority of the eastern U.S. coast with sustained winds of 20-25 miles per hour with gusts as high as 50 mph. Today, the northeast U.S. will experience similar conditions, with storm surge across local beaches as the storm continues to spin off the east coast of the United States. 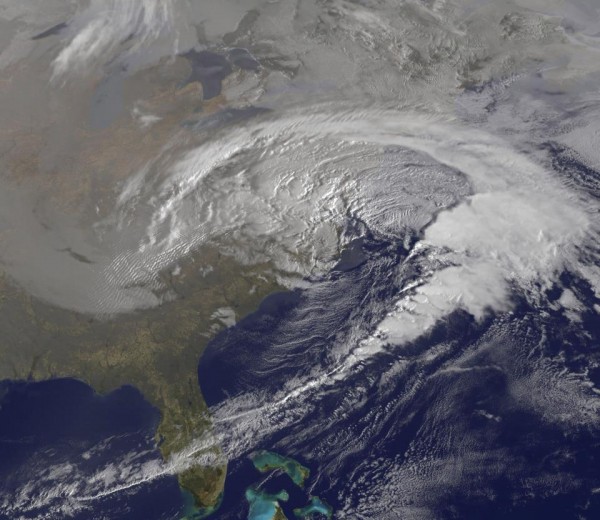 “Saturn” or “Snowquester” bringing strong winds and snow to the Mid-Atlantic and Northeast U.S. on March 6, 2013. Image Credit: NOAA/GOES East

Winter storm warnings and winter weather advisories are still in effect across the Ohio River Valley and Mid-Atlantic states on Wednesday, March 6, 2013. Coastal flood warnings and advisories are in effect across the Mid-Atlantic coastline from Maryland to North Island. The storm began across the northern Central Plains, and pushed to the southeast to affect the Midwest and Mid-Atlantic. Here is a list of snow totals that have occurred across these regions over the past two days. This information was released by the Weather Prediction Center as of 10 a.m. EST on March 6, 2013. All totals are snowfall measured in inches.

Information below is preliminary and not final: 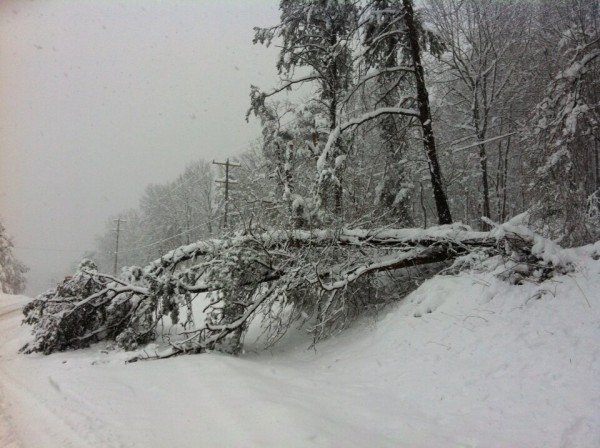 Heavy snow and strong winds have brought trees down across the Mid-Atlantic. This photo was taken in northern Virginia. Image Credit: Ginger Zee

This storm has had a few hits and misses. For instance, Washington D.C. was expecting nearly five to ten inches of snow Wednesday. However, temperatures were too warm and the D.C. area saw mostly rain. However, coastal flooding and storm surge remain an issue for parts of New England as the area of low pressure spins off the U.S. East coast. The coasts have been battered by significant storms such as Sandy and “Nemo”, so this storm is only another system to cause more beach erosion and flooding along the coasts. 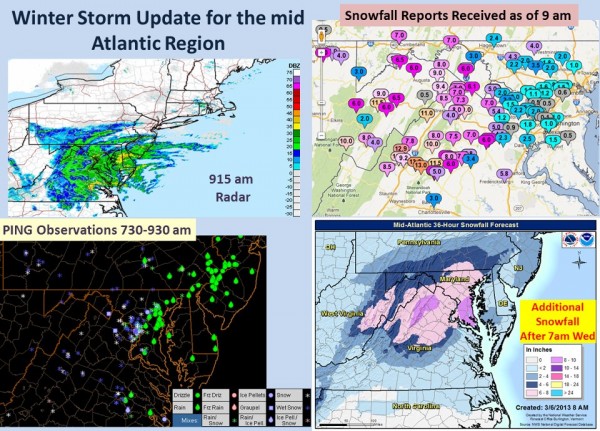 Image of snowfall totals from Tuesday morning across the Mid-Atlantic. Image Credit: NOAA/NWS

Bottom line: “Saturn” or “Snowquester” has produced snow from the the U.S. Midwest into the Mid-Atlantic. The system has brought upon numerous power outages and the main threat Wednesday night and Thursday will be coastal flooding and storm surge along the New England coast. The storm is expected to slowly push off the east coast by Friday. While many people in these regions saw snow, it was a forecast bust for parts of the Washington D.C. area who mainly saw rain instead of snow. However, forecasting precipitation type can be quite tricky and no one is perfect.