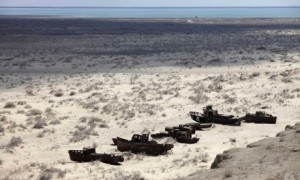 ** ADVANCE FOR USE MONDAY, DEC. 6, 2010 AND THEREAFTER **FILE – This April 4, 2010 file photo shows a ship graveyard near Muynak over the dried up Aral Sea in Uzbekistan. The once-vast Aral Sea between the former Soviet republics of Kazakhstan and Uzbekistan shrank by about 90 percent due to diversions of water, leaving behind a salty wasteland and abandoned fishing boats, and ruining the local economy. Now scientists are figuring out how to catalog and map the world’s most threatened ecosystems, just like their familiar list of endangered species. (AP Photo/Alexander Zemlianichenko, File)

Thank you! Your submission has been received!
Oops! Something went wrong while submitting the form.
END_OF_DOCUMENT_TOKEN_TO_BE_REPLACED