The Aral Sea – once the fourth largest inland sea in the world – has been shrinking markedly since the 1960s. Now its eastern basin has completely dried.

NASA satellite images show the Aral Sea without its eastern lobe on August 19, 2014 (right). Substantial changes are apparent when compared to an image from August 25, 2000 (left), and again when compared to the approximate location of the shoreline in 1960 (black outline). Image credit: NASA Earth Observatory

Summer 2014 marked another milestone for the Aral Sea, the once-extensive lake in Central Asia that has been shrinking markedly since the 1960s. For the first time in modern history, the eastern basin of the South Aral Sea has completely dried.

Philip Micklin, a geographer emeritus from Western Michigan University and an Aral Sea expert. He said:

A massive irrigation project has devastated the Aral Sea over the past 50 years. In the 1950s and 1960s, the government of the former Soviet Union diverted the Amu Darya and the Syr Darya – the region’s two major rivers – to irrigate farmland. The diversion began the lake’s gradual retreat. By the year 2000, the lake had already separated into the North (Small) Aral Sea in Kazakhstan and the South (Large) Aral Sea in Uzbekistan. The South Aral had further split into western and eastern lobes. 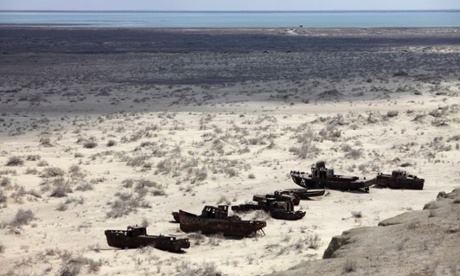 This 2010 photo shows a ship graveyard near Muynak over the dried up Aral Sea in Uzbekistan. Photo credit: Alexander Zemlianichenko.

The eastern lobe of the South Aral nearly dried in 2009 and then saw a huge rebound in 2010. Water levels continued to fluctuate annually in alternately dry and wet years.

According to Micklin, the desiccation in 2014 occurred because there has been less rain and snow in the watershed that starts in the distant Pamir Mountains; this has greatly reduced water flow on the Amu Darya. In addition, huge amounts of river water continue to be withdrawn for irrigation. The Kok-Aral Dam across the Berg Strait – a channel that connects the northern Aral Sea with the southern part – played some role, but has not been a major factor this year, he said. Micklin said:

This part of the Aral Sea is showing major year-to-year variations that are dependent on flow of Amu Darya. I would expect this pattern to continue for some time.