Large Hadron Collider back in business

CERN in Switzerland announced today that a new research season has begun for the Large Hadron Collider, following a $150 million overhaul. 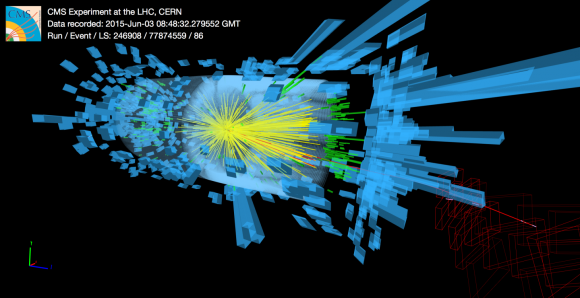 CERN in Switzerland just announced that its Large Hadron Collider (LHC) collected data today (June 3, 2015) for the first time in over 2 years, following a $150 million overhaul. Situated 100 meters beneath tranquil countryside on the Franco-Swiss border, the LHC is a 17-mile (27-km) underground ring. It’s the world’s largest and most powerful atom smasher, the largest and most complex experimental facility ever built, and the largest single machine in the world.

At 10:40 a.m. this morning (local time), operators in the CERN control room guided two stable beams of protons – particles found within all atoms – around the LHC before slamming them into one another at designated points.

Energetic smash-ups like these will let physicists in the coming years explore the tiny parts that make up the atoms from which our world and universe are made.

The LHC’s first run was from 2010 to 2013. That first run resulted, among other things, in the discovery of the long-sought Higgs boson — also known as the “God Particle” – a sub-atomic particle predicted by a theory in physics known as the Standard Model.

The Higgs Boson explains how the universe gets its mass.

The new and improved LHC is operating at much higher energies than were achieved during its first run. Test collisions have been carried out at the energy of 13 trillion electron volts (TeV), up from a high mark of 8 TeV achieved during the machine’s first run. CERN said in a June 3 statement:

With run 2 starting today, physicists have the ambition to further explore the Standard Model and even to find evidence of new physics phenomena beyond its boundaries, which could explain remaining mysteries such as dark matter, believed to make up about a quarter of the universe, or nature’s apparent preference for matter over antimatter, without which we would not exist.

The LHC will now run round the clock for the next three years.

Read more about the launch of run 2 of the LHC, via CERN

Some interesting Large Hadron Collider facts and figures, via CERN

Major work at the experiments for Run 2, via CERN

Bottom line: CERN in Switzerland announced on June 3, 2015 that a new research season, expected to last three years, has begun for the Large Hadron Collider (LHC). The LHC has been shut down for more than two years, undergoing a $150 million overhaul. It is now operating at operating at much higher energies than during its first run, says CERN.

Leon Lederman explains the mystery and beauty of the Higgs boson