Scientists find that large earthquakes do not increase the global seismic hazard for other damaging earthquakes far from the mainshock region.

The Richter Magnitude Scale classifies earthquakes based on the amplitude of seismic waves that travel through the ground during an earthquake. The scale is logarithmic, so each incremental increase in a whole number equates to a 10-fold increase in measured amplitude and about a 32-fold increase in the amount of energy released by the earthquake.

Earthquakes greater than 8.0 in magnitude are termed great earthquakes and they can cause extensive damage.

Earthquakes greater than 8.0 in magnitude occur at a frequency of approximately one per year. However, the majority of these great earthquakes range from 8.0 to 8.5 in magnitude. 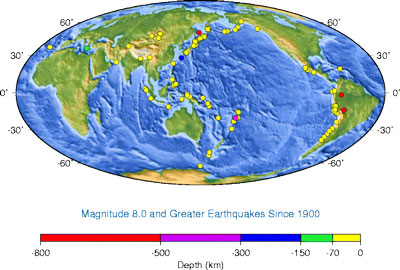 Seismologists are currently debating whether the recent cluster of large earthquakes is a statistical fluke or causally related.

Based on the evidence we’ve seen in our research, we don’t think that large, global earthquake clusters are anything more than coincidence.

The paper titled “Absence of remotely triggered large earthquakes beyond the mainshock region” was published online March 27, 2011 in the journal Nature Geoscience.

Thus scientists continue to debate whether large earthquakes (for example, larger than magnitude 8.0) can trigger clusters of other damaging earthquakes. But – when less powerful earthquakes (magnitude 7.0 and above) are included in a 30-year analysis – U.S. Geological Survey and the UT El Paso scientists found no evidence that such a triggering mechanism occurs.