Rensselaer Polytechnic Institute, IBM, and the FUND for Lake George have launched a new collaborative project that aims to make the treasured New York waterway the world’s “smartest lake.” The lake will be outfitted with advanced smart water technology including water quality sensors that are capable of collecting data in real-time and a world-class data visualization studio. The new technology is being installed with the hopes of improving the region’s ability to assess and respond to problems such as water contamination, algal growth, and invasive species. The project is also intended to serve as a global model for the protection of water resources. 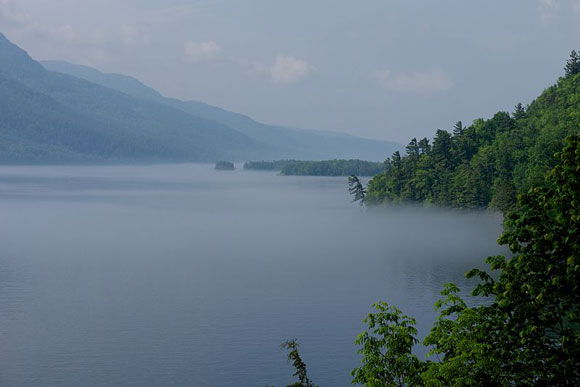 Shirley Ann Jackson, president of the Rensselaer Polytechnic Institute, commented on the project in a press release. She said:

Lake George has a lot to teach us, if we look closely. By expanding Rensselaer’s Darrin Fresh Water Institute with this remarkable new cyberphysical platform of data from sensors and other sources, and with advanced analytics, high performance computing, and web science, we are taking an important step to protect the timeless beauty of Lake George, and we are creating a global model for environmental research and protection of water resources.

An infographic of the Jefferson Project at Lake George. Image appears courtesy of IBM.

Lake George is a 32-mile long (52 kilometers) and 2.5-mile wide (4 kilometers) lake located at the base of the Adirondack Mountains in upstate New York. The lake was created from melting glaciers nearly 10,000 years ago. Today, the lake is highly valued for its crystal-clear waters. Approximately 95% of the land surrounding the lake is composed of natural forests, and almost half of that forested area is protected by a state-owned preserve.

Lake George is not, however, immune to problems. Over the past 30 years, scientists have detected invasive species such as zebra mussels and Eurasian watermilfoil in the lake. Increasing amounts of contamination from nutrients and road salt are also a growing concern.

Jeffrey Killeen, chairman of the board for the FUND for Lake George, commented on the new technology in the press release. He said:

The still pure water of Lake George is the lifeblood of our economy, but it will take unprecedented commitment to keep it that way. By shining the light of science on the future of Lake George, this bold collaboration will empower our ability to succeed. It is an historic opportunity to demonstrate just what it will take to protect a priceless natural treasure for future generations. The FUND for Lake George is honored to be playing a role in this vital pursuit.

The project has been aptly named the Jefferson Project after President Thomas Jefferson who declared that Lake George was “without comparison, the most beautiful water I ever saw.” The multi-million dollar project will be rolled out over the next three years.

Through the Jefferson Project, Rensselaer, the FUND for Lake George, and IBM will help advance the state of the science and the practice of water management to create a more precise, actionable and sustainable model that will give us a path forward.

If you’re interested in learning more about what smart water technology can do, check out this good article that was published on July 29, 2013 in the BBC News.

Bottom line: Rensselaer Polytechnic Institute, IBM, and the FUND for Lake George have launched a new collaborative project that aims to create the world’s “smartest lake.” During the project, Lake George in NY will be outfitted with advanced smart water technology with the hopes of improving the region’s ability to assess and respond to problems including water contamination, algal growth, and invasive species. The project is also intended to serve as a global model for the protection of water resources.

Zapping salt out of seawater