This ancient arthropod kept its babies on a leash

Scientists have discovered a tiny 430-million-year-old sea creature – dubbed Kite Runner – that apparently dragged its offspring around on strings like kites. 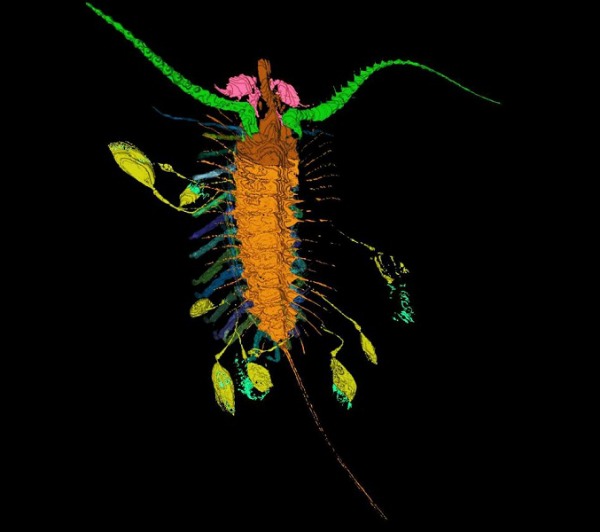 Scientists have discovered an ancient animal that carried its young in capsules tethered to the parent’s body like tiny, swirling kites. They’re naming it after The Kite Runner, the 2003 bestselling novel.

The miniscule creature, Aquilonifer spinosus, was an arthropod that lived about 430 million years ago. It grew to less than half an inch long, and there is only one known fossil of the animal, found in Herefordshire, England. Its name comes from “aquila,” which means eagle or kite, and the suffix “fer,” which means carry.

The research team described the new species in a paper published online on April 4, 2016 in the journal Proceedings of the National Academy of Sciences. Lead author Derek Briggs is Yale University’s G. Evelyn Hutchinson Professor of Geology and Geophysics and curator of invertebrate paleontology at the Yale Peabody Museum of Natural History. Briggs said in a statement:

Modern crustaceans employ a variety of strategies to protect their eggs and embryos from predators — attaching them to the limbs, holding them under the carapace, or enclosing them within a special pouch until they are old enough to be released — but this example is unique. Nothing is known today that attaches the young by threads to its upper surface.

The Kite Runner fossil shows 10 juveniles, at different stages of development, connected to the adult. The researchers interpret this to mean that the adult postponed molting until the juveniles were old enough to hatch. Otherwise, the juveniles would have been cast aside with the shed exoskeleton.

The adult specimen’s head is eyeless and covered by a shield-like structure, according to the researchers. It lived on the sea floor during the Silurian period with a variety of other animals including sponges, brachiopods, worms, snails and other mollusks, a sea spider, a horseshoe crab, various shrimp-like creatures, and a sea star. The juvenile pouches, attached to the adult by slender, flexible threads, look like flattened lemons.

Briggs said he and his colleagues considered the possibility that the juveniles were parasites feeding off a host, but decided it was unlikely because the attachment position would not be favorable for accessing nutrients. He said:

We have named it after the novel by Khalid Hosseini [The Kite Runner] due to the fancied resemblance of the juveniles to kites. As the parent moved around, the juveniles would have looked like decorations or kites attached to it. It shows that arthropods evolved a variety of brooding strategies beyond those around today — perhaps this strategy was less successful and became extinct.

The researchers were able to describe Aquilonifer spinosus in detail thanks to a virtual reconstruction. They reconstructed the animal and the attached juveniles by stacking digital images of fossil surfaces revealed by grinding away the fossil in tiny increments.

Bottom line: A paper published online on April 4, 2016 in the journal Proceedings of the National Academy of Sciences. describes the discScientists a newly-discovered an ancient animal that carried its young in capsules tethered to the parent’s body like tiny, swirling kites. The researchers are calling it “The Kite Runner” after the 2003 bestselling novel.