More evidence for a showy, fleshy snout for the hadrosaur, part of the family of duck-billed dinosaurs. These creatures lived 75 million years ago in what’s now northern Montana and southern Alberta, Canada. 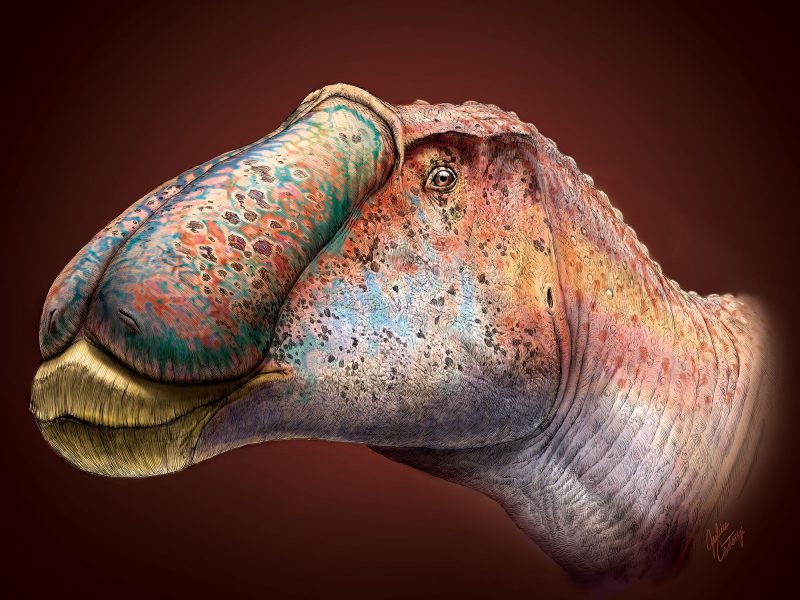 Artist’s illustration of a hadrosaur, and its hypothesized nose. Look below for an actual photo of hadrosaur bones. Image via Julius Csotonyi/University of Calgary.

Researchers studied fossils of juveniles to help work out how the head of an adult Prosaurolophus maximus dinosaur might have looked.

Prosaurolophus was a hadrosaur that lived 75 million years ago in what’s now northern Montana and southern Alberta, Canada. Unlike many duck-bills, which had a large bony crest on their heads, Prosaurolophus had only a small crest on the forehead. The researchers were interested in determining how the crest changed as the animal grew, as this feature has been thought to be related to sexual maturity and mate attraction.

The fossils used in the study – from Alberta’s Royal Tyrrell Museum – are the youngest and smallest individuals known for the species. 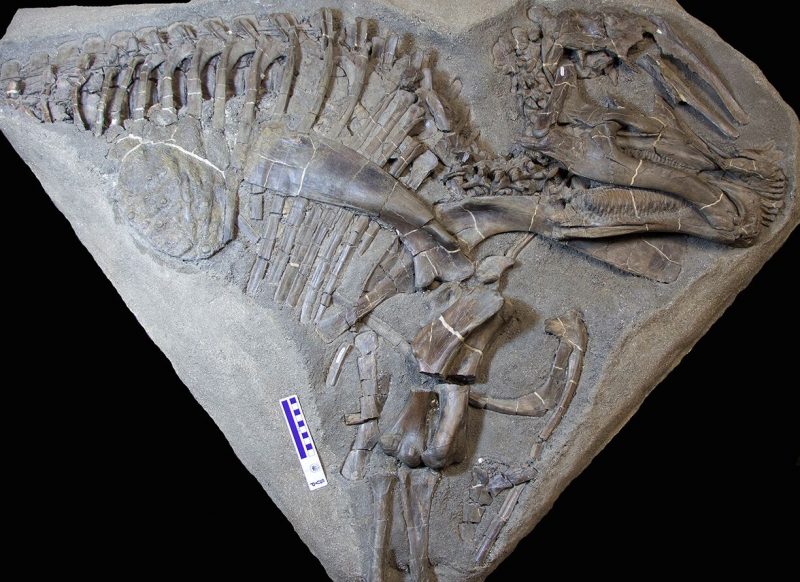 Front half of the skeleton of a juvenile Prosaurolophus dinosaur. Image via Eamon Drysdale, specimen at the Royal Tyrrell Museum.

The study suggests that a showy snout and bony forehead crest developed as the animal matured. Eamon Drysdale is a graduate student in the Department of Geoscience at University of Calgary, and the lead author of the study published May 19, 2019, in the Journal of Vertebrate Paleontology. Drysdale said in a statement:

We noticed that the bony crest grew very slowly in Prosaurolophus and remained small, unlike what happened in some duck-bills, which rapidly developed a large bony crest. Instead, rapid changes in the snout as the animal matured suggest that a soft tissue structure may have associated with the nostrils and used for display.

In Prosaurolophus, the snout would have been the primary display feature rather than the large head crest of other duck-bills. 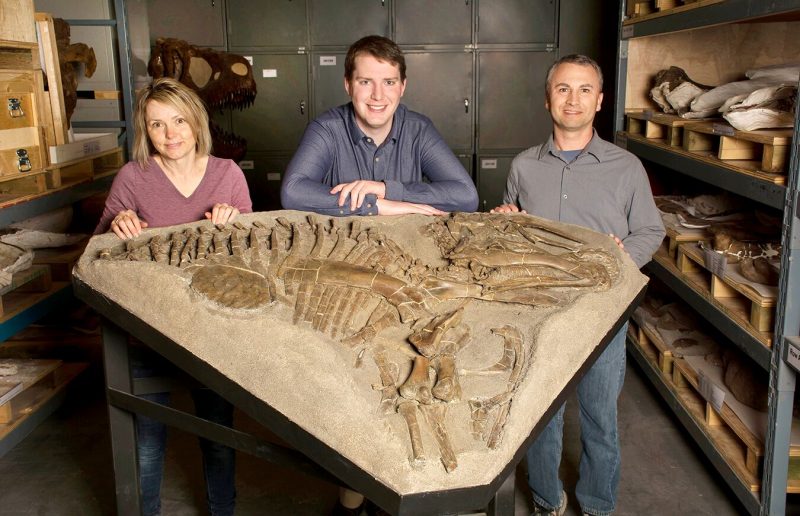 This idea of a showy, fleshy snout had been hypothesized previously by paleontologists, and the new study now offers evidence to support this premise. Darla Zelenitsky is assistant professor in the University of Calgary Department of Geoscience, and Drysdale’s supervisor. She said:

Gathering evidence to support this hypothesis was difficult because it required finding the fossils of juvenile individuals, which are very rare. It took over 30 years for the Royal Tyrrell Museum to recover a decent growth series for the species.

The unusual setting in which the fossils were discovered also shed light on the environments in which Prosaurolophus lived.

Dinosaurs were land dwellers, so their remains are usually found in rocks deposited in rivers and lakes. This was not the case for the three juvenile Prosaurolophus fossils featured in this study, said the researchers, which were found in muds deposited at the bottom of an inland sea that covered Alberta about 75 million years ago. François Therrien, curator at the Royal Tyrrell Museum, also supervised Drysdale. He said:

It was very fortuitous that three young individuals of the same dinosaur species happened to float out to sea and sink to the bottom where they were buried. Their preservation in the fine mud contributed to the fossilization of large patches of skin showing the flanks of these animals were covered in a mosaic of large and small scales.

As for why and how these dinosaurs ended up at sea, Drysdale said:

It may have been that these particular dinosaurs spent a lot of time in coastal areas. Living close to the coast, these animals may have been more easily washed out to sea after they died.

Bottom line: A study used fossils from juvenile dinosaurs to help determine the appearance of the hadrosaur.

Via University of Calgary