June 2018 continued the warming trend of the past 40 years. Plus, a word about the climate change myth that there’s been no warming since 1998. 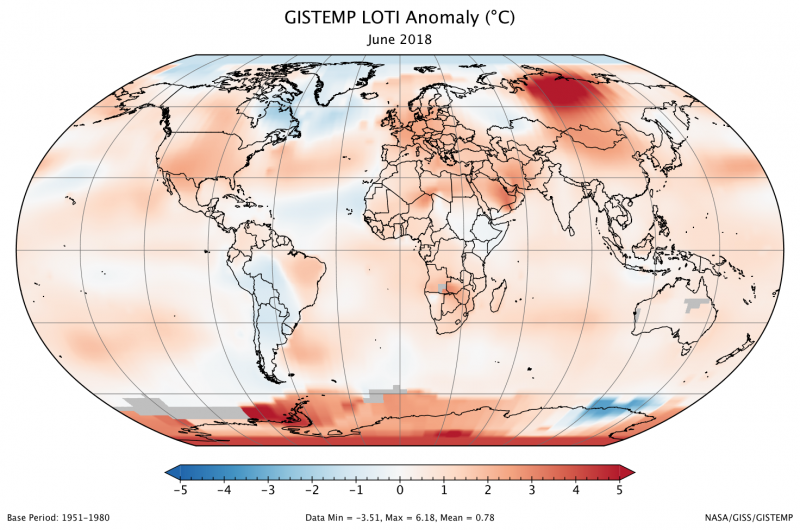 A global map of the June 2018 LOTI (land-ocean temperature index) anomaly, relative to the 1951-1980 June average. Image via NASA GISS

The monthly analysis by the GISS team is assembled from publicly available data acquired by about 6,300 meteorological stations around the world, ship- and buoy-based instruments measuring sea surface temperature, and Antarctic research stations.

June 2018 continued the warming trend of the past 40 years.

Wait. Have you heard the ongoing climate change myth that there’s been no warming since 1998? That’s been a particularly pernicious myth, and I still hear people try to bring it up as a point of argument. But those people are only showing their lack of understanding about how science works. 1998 was an exceptionally strong El Niño year, and it did bring high temperatures. But, as explained in this excellent article at SkepticalScience.com:

To claim global warming stopped in 1998 also overlooks a simple physical reality – the land and atmosphere are just a small fraction of the Earth’s climate (albeit the part we inhabit). The entire planet is accumulating heat due to an energy imbalance. The atmosphere is warming. Oceans are accumulating energy. Land absorbs energy and ice absorbs heat to melt. To get the full picture on global warming, you need to view the Earth’s entire heat content. More than 90 percent of global warming heat goes into warming the oceans, while less than 3 percent goes into increasing the atmospheric and surface air temperatures. Nuccitelli et al. (2012) showed that the Earth has continued to heat up since 1998.

In 1998, an abnormally strong El Niño caused heat transfer from the Pacific Ocean to the atmosphere. Consequently, we experienced above average surface temperatures. Conversely, the 2000s saw predominantly La Niña conditions, which had a cooling effect on global temperatures. As a result, the warming of atmosphere and surface temperatures temporarily slowed. They’ve now started to speed up again, and the planet as a whole has kept on heating up the whole time.

Read more: What has global warming done since 1998?

With regard to the subject of climate change generally, and the ongoing arguments about it on websites like EarthSky, I thought chemist Kevin Cowtan at the University of York – featured in the video above – had a particularly salient point when he said:

Has the design of your car changed over time? How about your phone? The instruments to measure Earth’s temperature change over time, too. And as they change, climate scientists sometimes have to go back into earlier data, and make adjustments. That’s partly what Cowtan means by the instruments sometimes get in the way of actually getting to the temperatures.

In other words, yes, what scientists are trying to do here – measure the amount of warming (or cooling) on Earth from year to year – is hard. It’s not as if they have some perfect temperature gauge that they started using a century and a half ago, and can still use today. Science is a process, and an imperfect process, as all human processes are. It just happens to be the best process, in fact the only process, we have for understanding what’s happening, over years and decades and centuries, with the temperatures of Earth’s air, land and water.

Bottom line: June 2018 continued the warming trend of the past 40 years. Plus, a word about the climate change myth that there’s been no warming since 1998. Shoutout to Steve Clayworth for pointing out the article at SkepticalScience.com.