The National Climatic Data Center (NCDC) released their climate report for June 2013 in the United States and found that June 2013 ranked the 15th warmest month on record. The average temperature in the U.S. for June 2013 was 70.4 degrees Fahrenheit, which is 2 degrees above the 20th Century average. June 2013 was also ranked as the 13th wettest June on record for the contiguous United States with an average of 3.43 inches was recorded, which is 0.54 inch above the 20th Century average. Headlines for the U.S. in June 2013 reflected the heavy rains across the Southeast and intense drought and wildfires in the West. 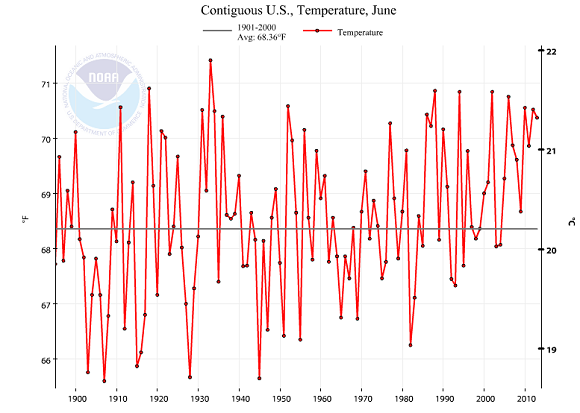 Contiguous temperatures in the month of June for the United States from 1895 through 2013. Image Credit: NCDC

In the western U.S., over 4,000 wildfires burned over 1.2 million acres in June 2013. Colorado had its most destructive wildfire ever; it destroyed nearly 500 homes. A persistent weather pattern formed across the U.S. that brought upon ridging across the Western U.S. (a ridge is an elongated region of relatively high atmospheric pressure, the opposite of a trough). Meanwhile, a large trough of low pressure persisted across the U.S. East. Heavy rains brought flooding across the U.S. Southeast. New Jersey and Delaware both had their wettest June on record. Meanwhile, 18 states (from Georgia to Maine) had June precipitation totals that ranked among their 10 wettest. Arizona, Colorado, and Wyoming each had one of their 10 driest Junes on record. It’s no surprise that the areas that saw high precipitation totals experienced cooler temperatures, while those who remained dry had temperatures above average. 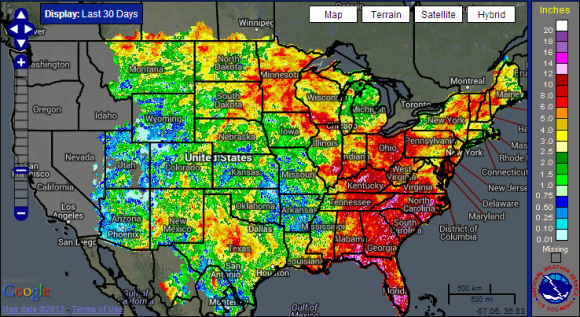 Rainfall totals over the past 30 days across the United States. You can easily see the great divide in precipitation. Image Credit: NOAA

Other highlights for the month of June 2013 include record warmth across Alaska. Some areas broke record high temperatures that climbed into the low 90s during the third week of the month. The statewide temperature was 4.0°F above the 1971-2000 average and the third-warmest June in its 96-year period of record. The U.S. Northeast had above-average temperatures and an above-average month for precipitation. Across the Southeast, temperatures were below average with precipitation well above average. Tropical Storm Andrea and a series of disturbances produced heavy rains and severe weather. The Midwest had temperatures around average, but experienced above average rainfall with only a few spots seeing below average precipitation totals. Severe weather picked up dramatically by the middle of June, which brought upon plenty of wind and even tornado reports across the region. The rest of the United States (Western regions) had below average precipitation and above average temperatures.

June 2013 divisional ranks across the U.S. showing who experienced above average and below average temperatures. Image Credit: NCDC

Bottom line: The U.S. had two extremes during the month of June 2013. The western U.S. experienced well above-average temperatures and below-average precipitation. Meanwhile, the eastern U.S. had above-average precipitation and mostly below-average temperatures due to the clouds and rainfall, especially across the Southeast. June 2013 is ranked as the 15th warmest month on record according to the NCDC.