It was another hot July. Last month was tied with July 2016 as the warmest July in the 137 years of modern record-keeping. 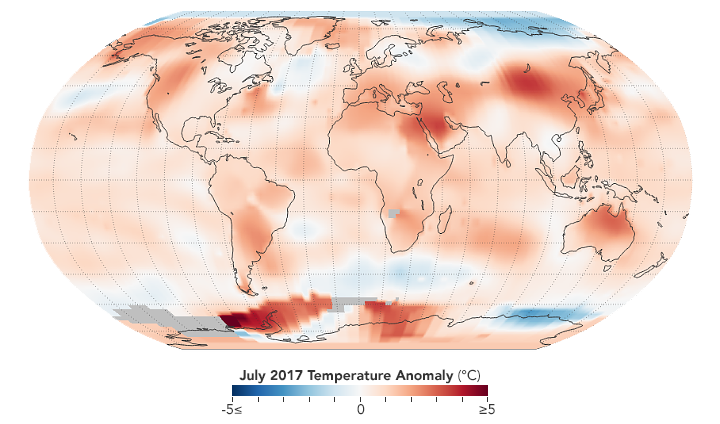 July 1 – 31, 2017. This map above depicts global temperature anomalies for July 2017. The colors do not represent absolute temperatures; instead they show how much warmer or cooler an area was compared to the baseline average from 1951 to 1980. Note that the strongest reds are as much as 9 degrees Fahrenheit (5 degrees C) above the monthly mean.Image via NASA Earth Observatory.

NASA scientists report that July 2017 was statistically tied with July 2016 as the warmest July in the 137 years of modern record-keeping.

According to a monthly analysis of global temperatures by scientists at NASA’s Goddard Institute for Space Studies (GISS), last month was about 0.83 degrees Celsius warmer than the mean July temperature of the period between 1951-1980. Only one July – July 2016 – showed a similarly high temperature (0.82 degrees Celsius). All previous months of July were more than a tenth of a degree cooler. The three previous global highs were set in 2015, 2011, and 2009.

This animation shows global temperature anomalies for every month since 1880, a result of the Modern-Era Retrospective analysis for Research and Applications, version 2 (MERRA-2) model run by NASA’s Global Modeling and Assimilation Office. Each line shows how much the global monthly temperature was above or below the annual global mean from 1980–2015. Note how monthly temperature anomalies rise over the 137-year record. The long-term warming trend has been driven by rising concentrations of heat-trapping carbon dioxide and other greenhouse gases in the atmosphere.Image via NASA Earth Observatory.

The GISS team assembles its temperature analysis from publicly available data acquired by roughly 6,300 meteorological stations around the world, as well as from ship- and buoy-based instruments measuring sea surface temperature and Antarctic research stations.

Bottom line: July 2017 was statistically tied with July 2016 as the warmest July in 137 years of modern record-keeping,