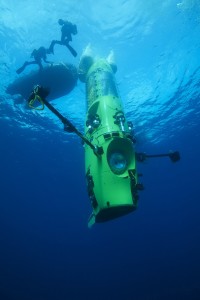 PERMITTED USE: This image may be downloaded or is otherwise provided at no charge for one-time use for coverage or promotion of DEEPSEA CHALLENGE dated 2012 and exclusively in conjunction thereof.Â Copying, distribution, archiving, sublicensing, sale, or resale of the image is prohibited.

REQUIRED CREDIT AND CAPTION: Any and all image uses must (1) bear the copyright notice, (2) be properly credited to the relevant photographer, as shown in this metadata, and (3) be accompanied by a caption which makes reference to the DEEPSEA CHALLENGE.

DEFAULT: Failure to comply with the prohibitions and requirements set forth above will obligate the individual or entity receiving this image to pay a fee determined by National Geographic.09:
Photo by Mark Thiessen/National Geographic
The DEEPSEA CHALLENGER submersible begins its first 2.5-mile (4-km) test dive off the coast of Papua New Guinea. The sub is the centerpiece of DEEPSEA CHALLENGE, a joint scientific project by explorer and filmmaker James Cameron, the National Geographic Society and Rolex to conduct deep-ocean research.

Thank you! Your submission has been received!
Oops! Something went wrong while submitting the form.
END_OF_DOCUMENT_TOKEN_TO_BE_REPLACED