Here in Texas and for 13 other states in the U.S. South and Southwest, severe drought conditions continue.

The U.S. drought news has intensified in recent weeks. On July 7, 2011 the National Weather Service’s Climate Prediction Center offered a new U.S. seasonal drought outlook, which you can find here. It indicates that – while drought conditions might improve for some states – most affected areas will get drier as drought persists or intensifies throughout large portions of the American South and Southwest. The New York Times ran a big drought story last week, which you’ll find here. At this writing, 14 U.S. states are suffering from what the Times called “dangerously dry” conditions. 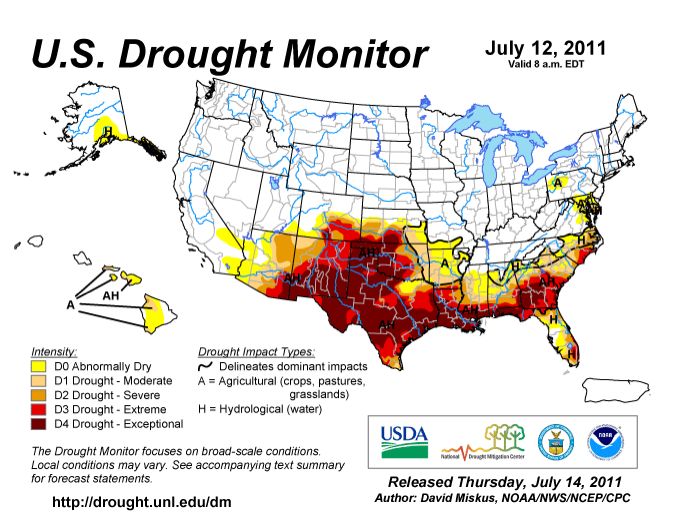 A dry climatology and expected above-median temperatures during the summer months across the southern Plains and lower Mississippi Valley limits opportunities for drought reduction, with further development possible across portions of Texas and Arkansas where abnormal dryness is already present.

In other words – and we are speaking now as residents of Austin, Texas – it’s hot and dry down here, and drought conditions are expected to get worse before they get better as the hottest part of summer approaches.

In fact, Texas is one of the hardest-hit of the currently suffering drought states, with the National Drought Monitor showing that most of Texas is at the highest intensity level for drought. Driving around Austin – here in mid-summer 2011 – we don’t notice the drought much unless we’re looking for signs of it. True, our city parks have lost trees. But it’s always hot in Texas in the summer, and people are continuing to water their yards, albeit with restrictions placed on water usage. So, as long as you’re inside the Austin city limits, you still see green.

But drive a short distance from city – anywhere there’s acreage, which is one thing Texas has plenty of – and you’ll see the devastating effects of the 2011 drought. In some places, by July 2011, the landscape looked gray. Dead trees are everywhere. The hot wind blowing dust seems more intense this year than ever. Rivers and streams are bone dry.

And, we’ve had fires.

In the beloved Davis Mountains of West Texas – location of famous Marfa, Texas, for example – a major wildfire as early in the year as April 2011 destroyed homes and devastated acreage. The April 2011 fire in the Davis Mountains was started by high winds whipping electrical wires in an abandoned house on the outskirts of Marfa. The fire rapidly spread for many miles in the high winds and eventually very nearly struck McDonald Observatory, a major astronomical observatory in the Davis Mountains.

The CPC outlined the severity of the 2011 drought in the U.S. South and Southwest.

In the wake of the 2010-2011 La Nina, widespread drought developed and persisted across the southern tier of the U.S. Significantly, over 65 percent of the current drought areas are extreme or exceptional, with many areas experiencing record precipitation deficit. Widespread drought conditions generally persisted or intensified across the southern Plains during the previous 30 days, as much of western Texas and eastern Oklahoma received less than 25 percent of normal precipitation.

La Nina is a climate pattern associated with cooler-than-normal water temperatures in the Equatorial Pacific Ocean.

The CPC does offer a bit of good news, too. Monsoon season in Arizona and New Mexico arrived later than usual this year, but now that it has started, many are hoping those two states will get a little wetter. Likewise, the forecast for the southeastern coast of the United States is for more rain. Our fingers are crossed for them. 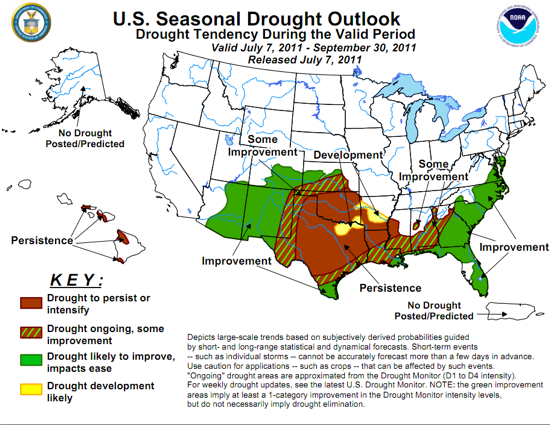 Again from the CPC:

The CPC July – September seasonal outlook calls for increased odds of above-median rainfall across the southeastern coastal Plain and piedmont regions. Since these improved rainfall chances occur during a climatologically wet time of year for the Southeast, improvement is indicated in this outlook from the eastern Gulf Coast through the Delmarva Peninsula.

Here in Austin, Texas, we are not feeling so lucky. Rain is not in our forecast. And 2011 is not our first year of drought. In fact, we have had three years of recent drought (2008 and 2009 were brutally dry as well, although 2010 was not as bad). For Texas residents, drought conditions make the notion of impending global water scarcity seem very nearby. Driving around deserted downtown Marfa in bone dry West Texas on a 111-degree afternoon in late June 2011, it was easy to imagine water becoming an issue.

Bottom Line: In summer 2011, drought conditions are expected to persist or intensify in large portions of the American South and Southwest. Texas and Arkansas, in particular, have little rain in in their long-term forecast.

Annual cost of weather may total $485 billion in U.S.