Four urban sections of the San Andreas Fault system in Northern California have stored enough energy to produce major earthquakes, according to a new study.

A new study published October 13, 2014 in the Bulletin of the Seismological Society of America confirms what many already know – that parts of California are due for a big earthquake. In this case, it’s four urban areas of the San Andreas Fault system in Northern California that have been shown to have stored enough energy to produce major earthquakes. These four areas are: Hayward, Rodgers Creek, northern Calaveras and Green Valley.

The earthquake cycle reflects the accumulation of strain on a fault, its release as slip, and its re-accumulation and re-release. The new study measured fault creep. Fault creep is the slip and slow release of strain in the uppermost part of the Earth’s crust that occurs on some faults between large earthquakes, when much greater stress is released in only seconds. Where no fault creep occurs, a fault is considered locked, and stress will build until it is released by an earthquake. 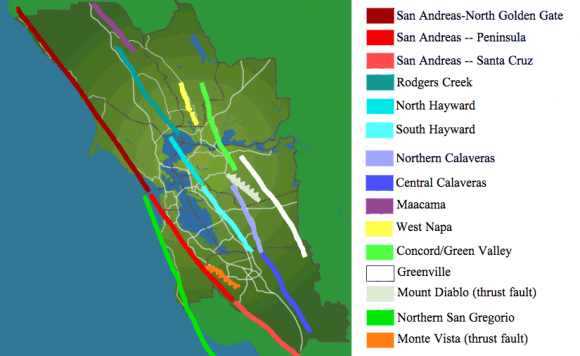 The San Andreas (reds and orange) and its major “sister” faults within the San Francisco Bay Area. Via Wikipedia

This study looked at how much creep occurs on each section of the San Andreas Fault system in Northern California. Enough creep on a fault can diminish the potential size of its next earthquake rupture.

The San Andreas Fault system in Northern California consists of five major branches that combine for a total length of approximately 1250 miles. Sixty percent of the fault system releases energy through fault creep, and about 28 percent remains locked at depth, according to the authors.

The extent of creep on some fault sections is not yet well determined, making our first priority to study the urban sections of the San Andreas, which is directly beneath millions of Bay Area residents.

According to the study, four faults have accumulated sufficient strain to produce a major earthquake. Three creeping faults have large locked areas that have not ruptured in a major earthquake of at least magnitude 6.7 since the reporting of earthquakes by local inhabitants: Rodgers Creek, northern Calaveras and southern Green Valley. The southern Hayward fault, which produced a magnitude 6.8 earthquake in 1868, is now approaching its mean recurrence time based on paleoseismic studies.

The authors also estimate three faults appear to be nearing or have exceeded their mean recurrence time and have accumulated sufficient strain to produce large earthquakes: the Hayward, Rodgers Creek and Green Valley.

Bottom line: A study in the Bulletin of the Seismological Society of America suggests that four urban areas of the San Andreas Fault system in Northern California have stored enough energy to produce major earthquakes. These four areas are: Hayward, Rodgers Creek, northern Calaveras and Green Valley.

Read more from the Seismological Society of America