Is Iceland’s Katla volcano about to erupt?

Heightened earthquake activity near Iceland’s Katla volcano in 2011 has scientists scrutinizing the volcano’s potential for a powerful eruption.

Heightened earthquake activity near Iceland’s Katla volcano in 2011 has prompted scientists to increase their scrutiny of the volcano due to the potential for a powerful eruption.

Katla is a 1512 meter (4961 feet) high subglacial volcano that lies underneath the ice near the southern end of Iceland’s eastern volcanic zone. When subglacial volcanoes erupt, the heat from the lava melts the overlying ice and can cause damaging glacial flood bursts called jökulhlaups.

Iceland is a hotspot for volcanoes because it is located in the center of two diverging tectonic plates. Ford Cochran is a scientist with the National Geographic Society who works on Iceland. In an interview with the BBC on December 1, 2011 Cochran explained how Iceland is the only place in the world where the mid-Atlantic Ridge rises above the surface of the ocean. Hence, he stated:

It means you actually see the crust of the Earth ripping apart. You have an immense amount of volcanic activity and seismic activity. 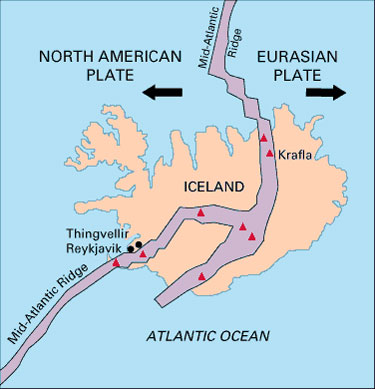 Katla is one of Iceland’s most active volcanoes. Major eruptions at Katla typically occur every 40 years on average. The last major eruption at Katla occurred in 1918.

Scientists first noticed heightened earthquake activity at Katla in July 2011. On October 5, 2011 an intense swarm of earthquakes was recorded in Katla’s caldera. The earthquake swarm consisted of shallow (less than 5 kilometers or 3.1 miles in depth) low magnitude (less than a magnitude 4.0) quakes.

Katla’s recent unrest has raised concerns over the possibility of powerful eruption.

Andy Hooper is a volcanologist from Delft University. In a Decemeber 2, 2011 interview with Sky News Online he explained that despite the increase in seismic activity at Katla, it would be difficult to predict if and when the volcano might erupt and how bad the consequences would be. He estimates that if Katla were to erupt there would likely be extensive flooding but that any impacts from ash fallout would largely depend on the weather at the time of an eruption.

The Icelandic Meteorological Office (IMO) is actively monitoring conditions at the Katla volcano. IMO is reporting that:

There are presently no measurable signs that an eruption of Katla is imminent; however, given the heightened levels of seismicity, the situation might change abruptly. Monitoring teams at IMO are following the ongoing activity closely, and sensor-based networks around the volcano ensure that all seismological, geodetic, and hydrological changes are detected.

Erik Klemetti, assistant professor of Geosciences at Denison University and author of the Eruptions blog, has posted a useful link to a live webcam of the Katla volcano that you can view here. Just be sure to try to view the Katla webcam during Iceland’s daylight hours (on December 4, 2011 the sun rose in the capital city of Reykjavik at 10:53 am and set at 3:42 pm).

Bottom line: Heightened earthquake activity near Iceland’s Katla volcano in July and October 2011 has prompted scientists to increase their scrutiny of the volcano due to the potential for a powerful eruption. Despite the increase in seismic activity, scientists are unable to predict if and when the volcano might erupt and how bad the consequences would be. The Icelandic Meteorological Office (IMO) is actively monitoring conditions at the Katla volcano.