It’s easy to confuse a circumhorizon arc with an iridescent cloud, and vice versa. Here’s how to tell these 2 elusive, colorful, beautiful daytime sky phenomena apart. 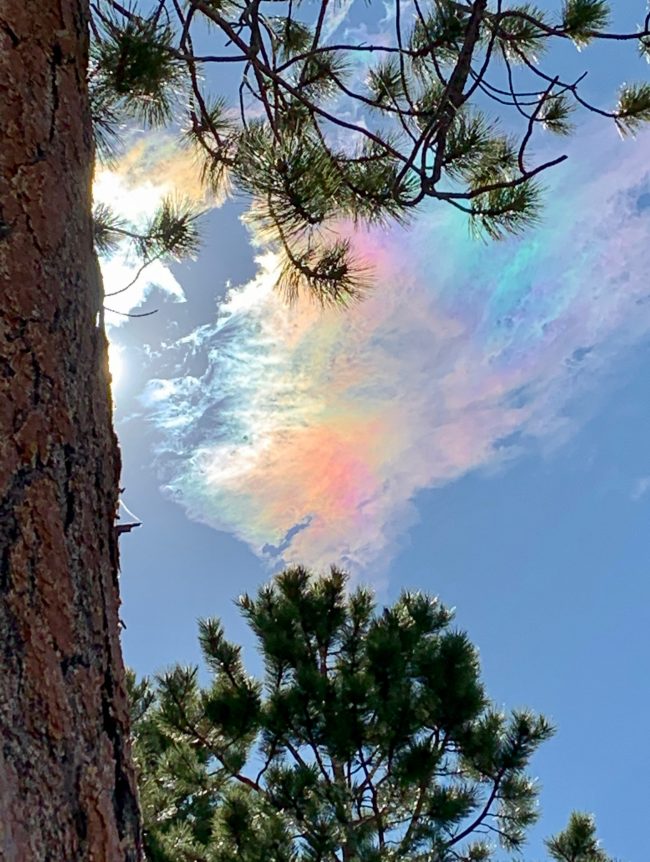 Here at EarthSky, we often receive photos of rainbow-like arcs and bands in the sky. Most aren’t true rainbows, but instead are other examples of the many sorts of optical phenomena you can see in the sky. Two that are commonly confused are iridescent clouds and circumhorizon arcs. It was an alert EarthSky reader – George Preoteasa, who responded to a photo we had mistakenly identified at our website – who set us straight. We hope this post will let you learn to tell the difference between these sky phenomena, too.

Mistaking one for the other is very common! But it’s also easy to learn which is which. 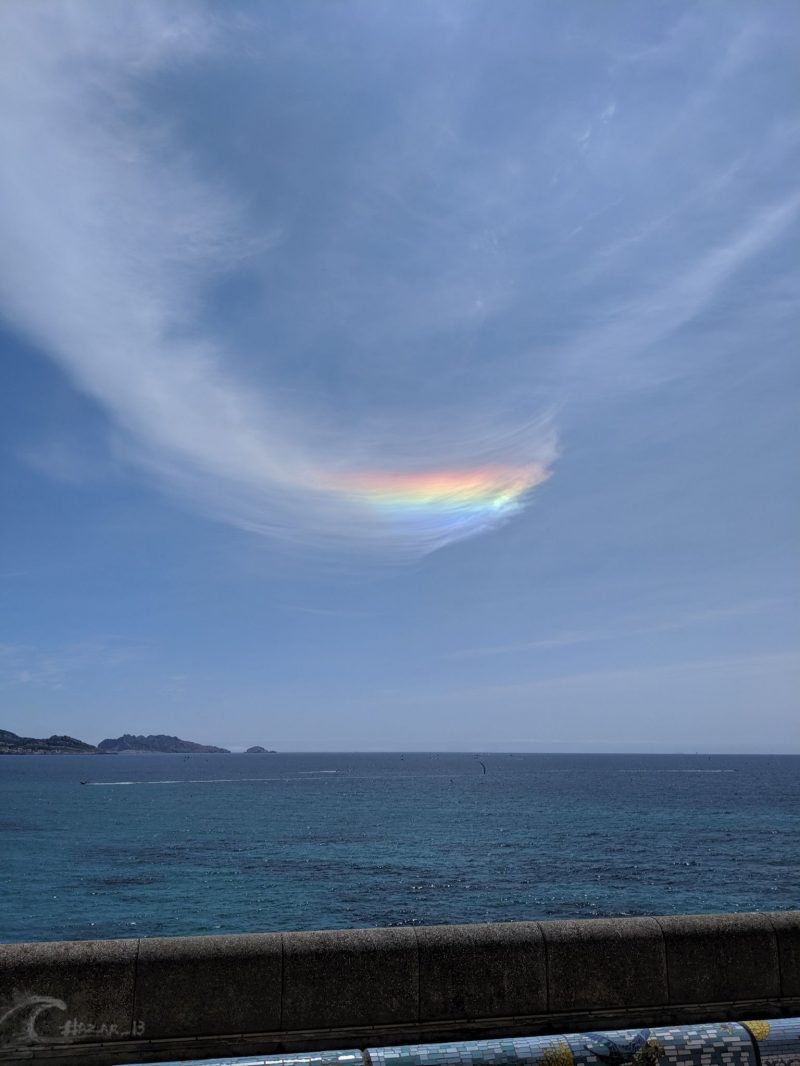 View at EarthSky Community Photos. | Eric Broneer in Marseille, France, caught this circumhorizon arc on June 3, 2019. He wrote, “Beautiful weather, very dry, sun behind me.” Notice how organized the colors are, red at the top, indigo at the bottom. 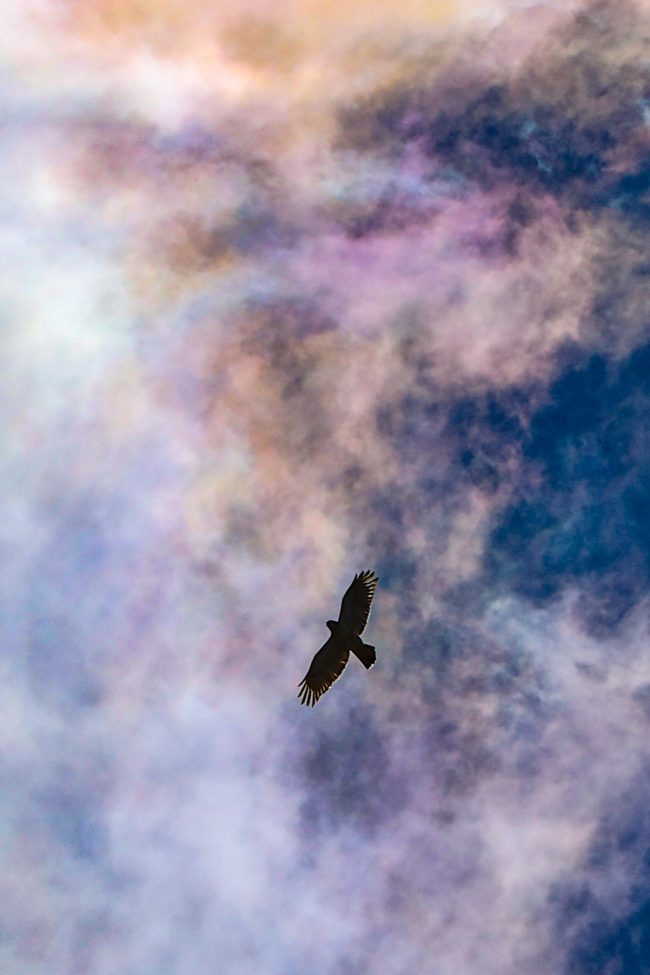 View at EarthSky Community Photos. | Karl Diefenderfer caught this image of a bird soaring in front of iridescent clouds on June 14, 2019, from Blue Bell, Pennsylvania. Notice that the colors in the cloud are randomly distributed. Thank you, Karl!

How can you tell the difference between an iridescent cloud and a circumhorizon arc in the sky, or in a picture?

George Preoteasa said he used to mistake one for the other, too, and had made a study of how to tell them apart. He wrote:

Circumhorizon arcs have a certain fuzziness. They are caused by ice crystals in cirrus clouds, much as solar and lunar halos are. Iridescence, on the other hand, is caused by water droplets.

For a circumhorizon arc to occur, the sun must be high up, over 58 degrees above the horizon. Iridescence usually occurs close to the sun, which makes it difficult to photograph. You need to hide the sun so that sunlight does not overwhelm the colors in the cloud. This is an iridescent cloud. The colors are not as organized as in a circumhorizon arc, and they tend to be seen near the sun. Best way to see one is to place the sun itself behind some foreground object, a building or mountain, for example. Duke Marsh captured this image in 2012 in New Albany, Indiana.

It’s funny, but I made the same mistake. I was using the CloudSpotter app from the Cloud Appreciation Society. If you see clouds or cloud features or optical phenomena, you can take a picture and submit it for verification. I submitted the shot below as iridescence, and the moderator pointed out it’s not, but rather a fragment of a circumhorizon arc.

After that, I went to Les Cowley’s website – Atmospheric Optics – and immediately it became clear that the Cloud Appreciation Society moderator was right. So now I’m spreading the knowledge :-) 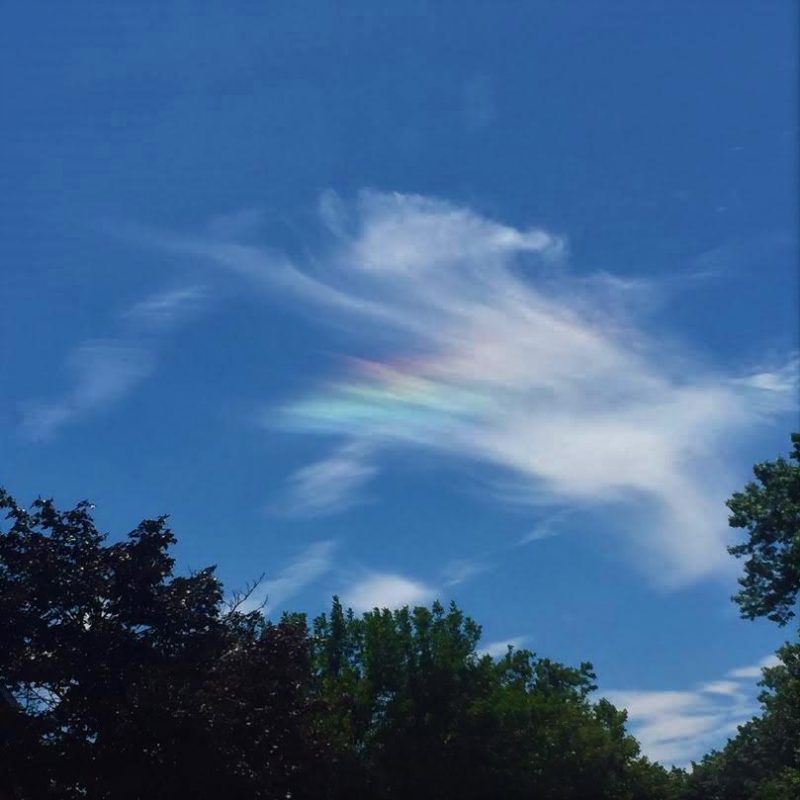 Here’s the image George Preoteasa captured, which he at first thought was an example of an iridescent cloud. Now he knows it’s a circumhorizon arc, and he described these arcs this way: “Imagine a horizontal band at the level where you see the colors. If you had cirrus clouds with the same properties as the one with the colors, you would get a nice colored arc parallel to the horizon. For a circumhorizon arc to occur, the sun must be high up in the sky, above 58 degrees. The fact that the sun does not appear in this picture is another clue it’s not iridescence.”

George also very kindly went into an EarthSky article about iridescent clouds and found three photos that are really circumhorizon arcs. We next sent those three photos to the world’s sky optics guru, Les Cowley of Atmospheric Optics, for confirmation. Les – who is a long-time friend of EarthSky and often helps us identify sky phenomena – confirmed that, yes, the photos below are all circumhorizon arcs. He also confirmed that:

A circumhorizon arc is always about two outstretched hand-widths below the sun. Iridescent clouds are usually rather closer.

Below are the three photos EarthSky had misidentified: 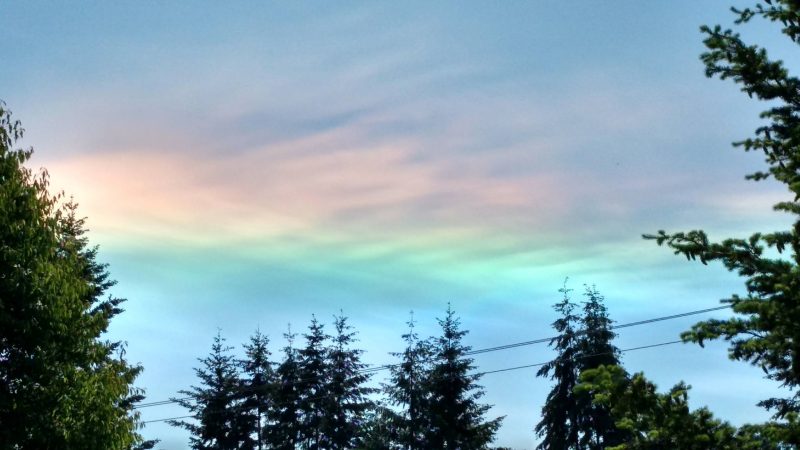 Circumhorizon arc. The band is parallel to the horizon with red at the top, indigo at the bottom. The sun is well out of the picture. For circumhorizon arcs, the sun is always at least twice the span from thumb to little finger of your outstretched hand, held at arm’s length. Photo taken May 31, 2016, by Laura Berry. 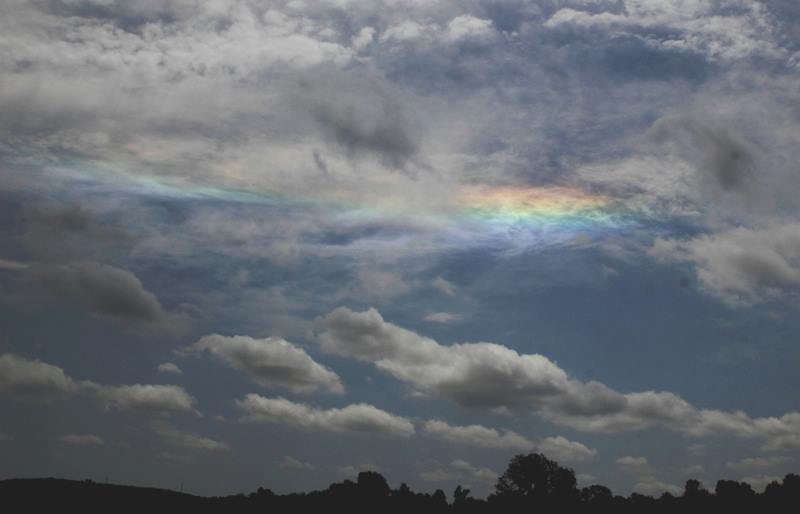 Circumhorizon arc. Parallel to horizon. Red at top, indigo at bottom. Sun well out of picture, at least 2 hand-spans away. A circumhorizon arc can look slightly curved in photographs, but the curvature isn’t real; it’s due to the distortion that camera lenses can make. In the sky, circumhorizon arcs are completely straight. Photo taken May 27, 2013, by Mike O’Neal. 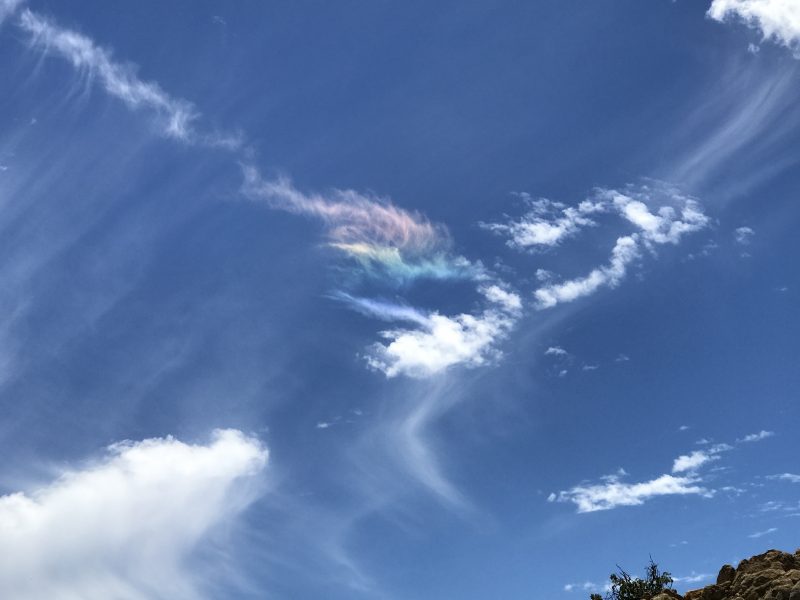 Circumhorizon arc. If there were more cloud here, you could see more of the arc, which is parallel to the horizon with red at the top, indigo at the bottom. Photo taken May 24, 2017, by Zaneta Kosiba Vargas in Santa Barbara, California.

The Cloud Appreciation Society had this to say about the likelihood of seeing a circumhorizon arc:

The rarity of the circumhorizon arc depends on where you’re based. The lower the latitude, the greater your chance of spotting a circumhorizon arc when Cirrus or Cirrostratus clouds are in the sky. Les Cowley … reports in his Atmospheric Optics site that from most locations in the U.S. they can be observed about five times a year, but from locations in northern Europe you might see them only once or twice. Likewise, they’re more commonly seen in Australia than in New Zealand. You’ll never see a circumhorizon arc, however, from latitudes above 56 degrees – in the Northern Hemisphere, that’s anywhere north of Copenhagen, Denmark – since the sun never climbs high enough in the sky.

Nor is it possible, unless you’re near the equator, to see a circumhorizon arc throughout the year. For most of us, the dependence of this vibrant optical effect on a such high sun means that its horizontal streak of pure, spectral color will only ever grace our skies during the summertime. 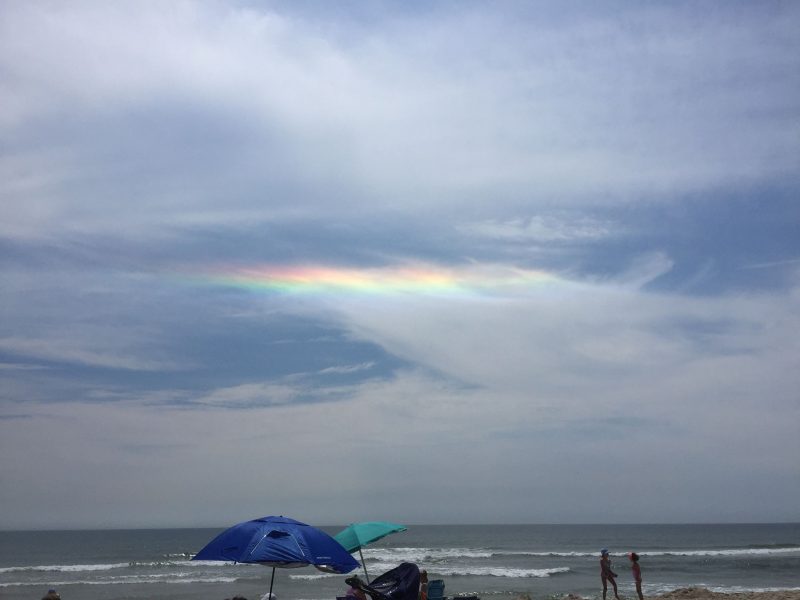 Here’s Joan Helle-Fasolo’s July 4, 2017, image, which EarthSky misidentified as an iridescent cloud. In fact, this is an entirely different sky phenomenon, called a circumhorizon arc.