Inside the secret lives of synchronous fireflies

In the Smoky Mountains, thousands of fireflies flash in unison. Researchers want to know how.

It’s a sight to behold: On June evenings in Tennessee’s Smoky Mountains National Park, thousands of male fireflies all flash together in near-perfect harmony. These fireflies, also called lightning bugs, flash with a distinct rhythm: a few quick bursts of light followed by a several-second pause, then more bursts. In person, the display looks like a wave of light passing over the hillside.

A team of researchers from University of Colorado Boulder wanted to understand how relatively simple insects manage to coordinate such feats of synchronization.

Their new study, published September 23, 2020, in the peer-reviewed Journal of The Royal Society Interface suggests that, rather than flash according to some innate rhythm, the fireflies observe what their neighbors are doing, then adjust their behavior to match. 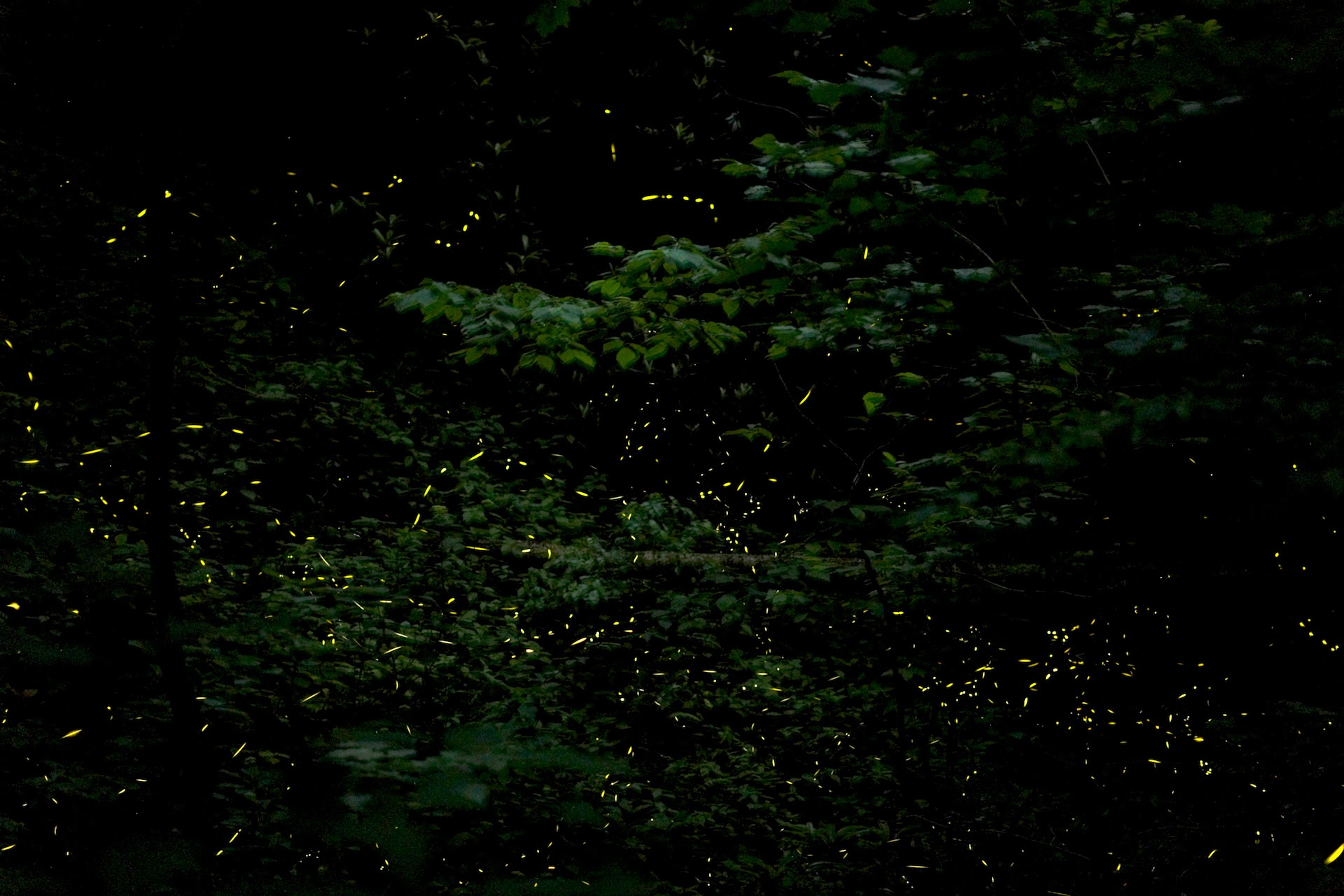 View larger. | Stacked photo of fireflies in Tennessee. Image via University of Colorado.

To date, scientists have struggled to explain how the fireflies’ synchronization works. University of Colorado researcher Raphaël Sarfati is lead author of the new study. Sarfati said in a statement:

Is it something hardwired in fireflies that makes them want to synchronize? Or is it something more context dependent, maybe based on their environment?

As study co-author Orit Peleg describes it, the firefly display is over almost as soon as it begins. Males belonging to the species Photinus carolinus only flash for about two weeks every June, and then just for a few hours a night. She said:

Studying them is a constant race against time.

Fireflies in the wild

For their research, the team drove to Great Smoky Mountains National Park in Tennessee in June 2019. There, they set up two 360-degree cameras in a wooded area to map out the locations of the bugs flashing in their vicinity. The group also assembled a pop tent on site and introduced a few fireflies at a time to the isolated environment. Sarfati said:

It was, basically, like we were one of the fireflies in the swarm.

The researchers discovered that the fireflies don’t behave the same way when they’re alone as when they’re in a big group. For example, the team found that a single male firefly alone in the tent would flash without a good sense of rhythm, a few bursts here, a few bursts there. But with more fireflies in the tent, things began to change. Sarfati said:

When you start putting 20 fireflies together, that’s when you start observing what you see in the wild. You’ve got regular bursts of flashes, and they’re all synchronized.

That suggested to the researchers that the fireflies likely aren’t hardwired to flash with a particular pattern. Instead, their light displays seem to be more social. Bugs watch what their neighbors are doing and try to follow along.

The group’s findings, Peleg said, could help researchers learn more about a range of other synchronous behaviors in nature. She said:

This kind of synchrony occurs in many natural systems. The cells in our hearts all flex and contract at the same time. Neurons in our brains also synchronize.

The researchers noted that insect species that their glow to attract mates have found themselves competing for attention with human sources of light. Many species are on the decline around the world because there is more and more light pollution. Peleg said she doesn’t want to see the glow from these insects disappear:

There always was this last half an hour at night where we were tired and sitting in the forest, waiting for the fireflies to stop flashing. It was the most relaxing part of this work.

Bottom line: On summer evenings in Tennessee’s Smoky Mountains, thousands of fireflies flash in unison. Researchers want to know how they do it.