What we inherited from bug-eating mammal ancestors

If you’re an advocate for insects in human diets, go ahead. Munch on a grasshopper. The genes needed to digest bugs are still in our genome, inherited from the tiny, furry distant ancestors of all mammals, including humans. 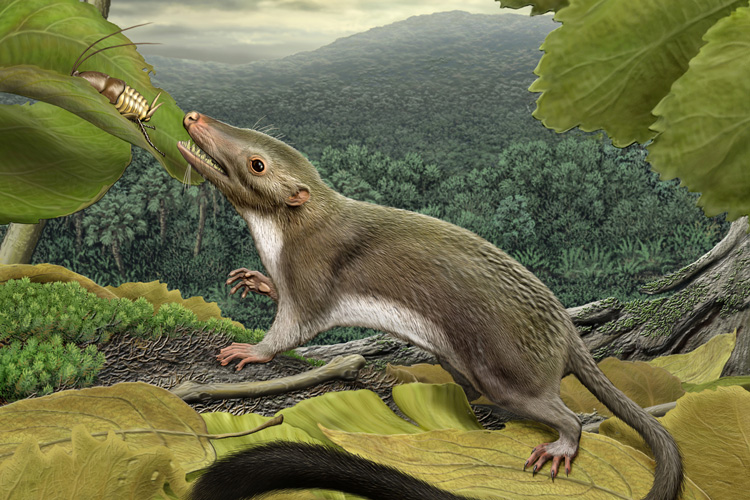 Detailed artistic reconstruction of an ancestral placental mammal living during the Age of Dinosaurs 66 million years ago, showing teeth adapted to capturing and eating insects. Image via Carl Buell.

The distant ancestors of all mammals – small, furry creatures that scurried around the feet of the dinosaurs 66 million years ago – were mostly insect-eaters. The genes for the special enzymes that enabled them to digest insects are still hanging around in nearly all mammal genomes today – including our human genome. That’s according to a new analysis of the genomes of 107 different species of mammals, published May 16, 2018, in the peer-reviewed journal Science Advances.

Study author Christopher Emerling is a postdoctoral fellow at University of California, Berkeley. Emerling said that even animals like tigers and seals that would never touch an insect have non-functional pieces of these genes sitting in their chromosomes, betraying their ancient ancestors’ diet. He said:

One of the coolest things is, if you look at humans, at Fido your dog, Whiskers your cat, your horse, your cow; pick any animal, generally speaking, they have remnants in their genomes of a time when mammals were small, probably insectivorous and running around when dinosaurs were still roaming Earth.

It is a signature in your genome that says, once upon a time you were not the dominant group of organisms on Earth. By looking at our genomes, we are looking at this ancestral past and a lifestyle that we don’t even live with anymore.

The genetic evidence corroborates the conclusions paleontologists reached years ago based on the shapes of fossils and teeth from early mammals. Emerling said:

In essence, we are looking at genomes and they are telling the same story as the fossils: that we think these animals were insectivorous and then dinosaurs went extinct. After the demise of these large carnivorous and herbivorous reptiles, mammals started changing their diets. 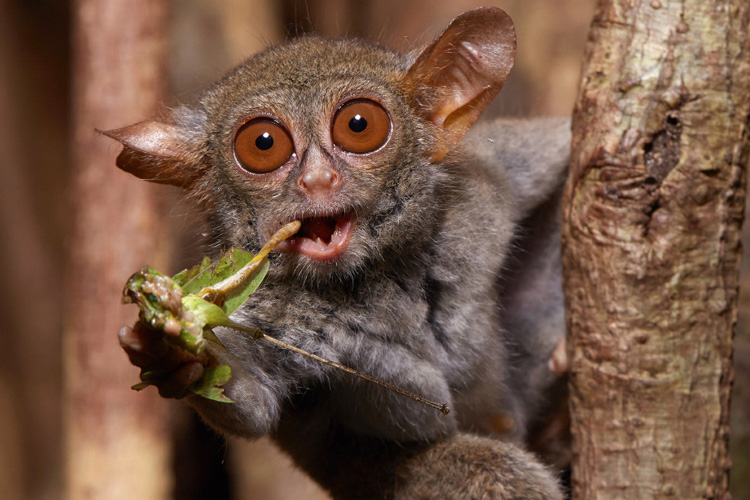 A spectral tarsier (Tarsius tarsier) feeding on a grasshopper in Tangkoko National Park, Northern Sulawesi, Indonesia. Tarsiers have five chitinase genes to digest the high amount of chitin in their insectivorous diet, which likely represents the ancestral condition of all placental animals, including humans. Image via Quentin Martinez.

The team looked at genes for enzymes called chitinases. These enzymes break down insects’ hard, outer shells, which are composed of a tough carbohydrate called chitin. They looked through the genomes of the largest group of mammals, those that have placentas that allow longer development in the womb (that excludes marsupials like opossums and egg-laying monotremes like the platypus). These placental mammals ranged from shrews and mice to elephants and whales.

In all, the team found five different chitinase enzyme genes. They found that the greater the percentage of insects in an animal’s diet, the more genes for chitinase it has. Emerling said:

As you would expect, ant and termite specialists such as aardvarks and certain armadillos have five functioning chitinase genes. But so do the insect-loving primates called tarsiers. They appear to be the only primates that have so many functional chitinase genes, Emerling said.

The story told by these chitinase genes is one of early mammals hunkering down eating insects while the big guys, the huge herbivorous dinosaurs like the brontosaurus and the big meat-eaters like T. rex gobbled up the most abundant food resources. Only 66 million years ago at the end of the Cretaceous Period, when all non-bird dinosaurs died out, were mammals able to expand into other niches, which they quickly did. The first carnivorous and herbivorous mammals, as indicated by their teeth, arose within 10 million years of the dinosaurs’ demise.

Read more about the study from UC Berkeley